Is it possible to turn visible the invisible window's borders of Windows 10?

This is a brief introduction for those who don't know the next information:

The new Windows 10's flat window style uses a different window-border mechanism than previous Windows versions, which affects in a horrible way the window aspect, and its usage, in the meanning of window-resizing and window-positioning.

Windows 10 by default has a 1 px. visible border, notice the word "visible", because the reality is that the border width is greater, simply is just an invisible border, that is, the border image resource that Windows 10 uses it only fills 1 px. of the real width of the window border bounds, no matter how big is the border width, you always will only see 1 px. border, and here you can imagine by yourself the problem that can cause.

In Windows 10, as in previous Windows versions, you can perform some registry changes to increase the window borders width, this is an example of what I mean, for Windows 8: 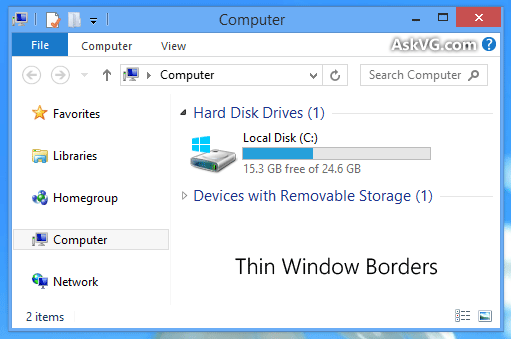 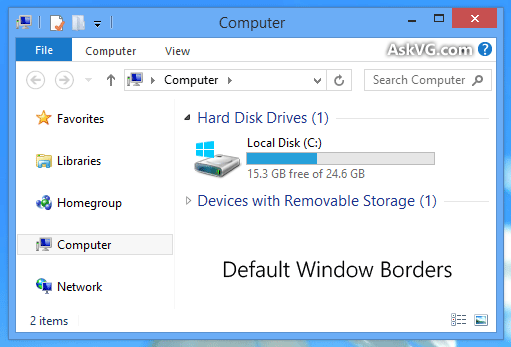 However, as for the (bad-design) "rules" of Windows 10, if the user tries to reproduce the same registry trick in this O.S, nothing will change in the window aspect, you'll end up with a geater border, yes, but remember that only 1 px. of that border will be visible, so you'll end up having a damn 1 px. visible border with a big and annonying invisible resize handle.

This poor, bad, unfriendlly, and horrible design decission of Microsoft is a fact, as is also a fact that exists much users who loves this 1 px. border aspect, their oppinion is respetable, however, honestlly those users only fix their oppinion on the O.S. aspect, they don't notice the wrong behavior that 1 px. border can cause to they, whch will break the end-user productivity and comfortableness, even just with simple things like trying to move a Window, or trying to difference which window is over to other, because the border of all windows are invisible.

This issue has been discussed over "all" the Internet forums related to Windows 10 personalization, here is a simple but never-ending discussion topic on a Microsoft Community thread for your interest:

( As you can see, the topic has been created 2 years ago, has +14.000 views, +100 replies, +270 recommends, but ZERO answers and ZERO fixes or responsabilities from Microsoft team, yes, is very disgusting. )

The pressence of that damn and uncustomizable? 1 px. border, there is where all the problems and worst nightmares begins with Windows 10.

I always loved to use a program named Sizer in previous Windows versions, which is an application that lets you positionate any window to customizable preestablished positions for any visible window in just one click, however this kind of time-saver window organization applications can't work as expected in Windows 10 because the damn invisible border, because the size of the invisible borders will be sum when calculating the position for the window, and this is translated into an annonying empty space on the desktop between the positioned windows and the desktop margins...

For those who are familiar with Sizer, this is an image to let you understand what I mean, the blank space between positions (which are the size of the damn invisible border of Windows 10): 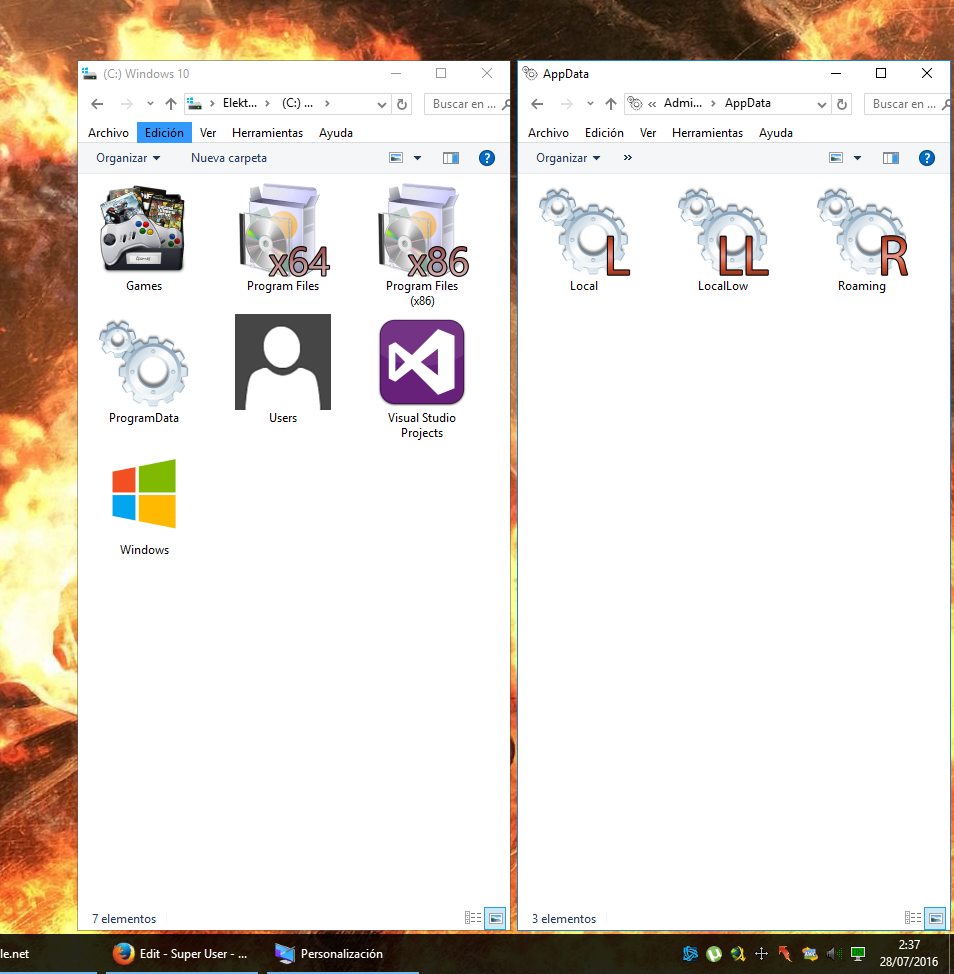 So, for me and my reasons, having a 1 visible px. border is a very big problem that I'm facing every day using Windows 10, I'm really ...desperately jaded.

I won't rollback to a previous Windows version because I gain more by using Windows 10 O.S and its performance advantages, however the 1 px. border is the most horrible disadvantage of this O.S, I would like to feel happy by having a real window border like in previous Windows versions, this means a border image that fills the entire border width (like the images of the comparison I published above in the question introduction), I don't want to have a 8 px. border in which only 1 px. is visible, that is crazy, I don't know in what the hell were thinking the devs. who designed Windows 10, if you will give the name "Windows" to your own O.S, then try to design and implement a real "window" appearance and beahavior, then avoid implementing invisible window resize handles for the mother of God!!.

At this point, knowing that In Windows 10 the real border width is 8 px, but only 1 px. is shown, and the rest of the border is just... invisible,

I would like to ask for a possible solution to turn visible the border in Windows 10, I mean to have a real window border like in previous Windows versions, with a border image resource that fills the entire border width, NOT an invisible border.

I'm aware this question probablly needs advanced knowledges, further investigation and personal testing, because Google's result pages will not show anyone how to solve this issue, all the people talk and discuss about this 1 px. border issue, but no body seems to know a solution, and worst than that, Microsoft seems is not listenning to anyone and to the reasonable design of a "window".

I must say that I have an application named Windows Style Builder (for Windows 10 version), which is able to open a .msstyle theme file to edit any image resource contained in the theme, that program was the only hope I found to try find and make greater the border image resource to fill the entire real border width, however I tried to make bigger all the border image resources used in Aero theme, but Windows 10 remains showing a 1 px. border, seems no matter how much big is the border image resource used to show the border by the theme, seems the displayed border width is not controlled by the theme itself (I don't really know), so my nightmare is to think that seems a person with reversal engineering knowledges to create a kind of home-made patch to apply to who knows which executable or windows resource could be required to solve this annonying issue of Windows 10, I really hope this thing could be solved in a more friendlly way.

I don't know what more to investigate and to try by myself.

The only requisite I claim for, is that a possible solution should not imply using a 3rd party theme like for example Aerolite, this is because I'm already using a 3rd party darker windows theme, so If I change to other (light) theme then I will end-up having a new problem.

For that reason, please take really into account that my question is "How to turn visible the invisible window's borders of Windows 10", is not "which 3rd party theme I can install to see window borders in Windows 10?".

Please also try don't focus the question to Sizer alternatives, those alternatives are welcome and appreciated from my side, of course, really, however the real problem is the invisible borders of Windows 10, which not only will affect Sizer, is a problem that will affect to overall usage of the O.S.

These paragraphs below are just to argument why Stardock's WindowBlinds can't be described as a solution in any manner. You can ignore all these words below.

Obviouslly Stardock's WindowBlinds will be a good personalization program for other kind of purposses, or for those who feel good using it, but not just for making visible the window borders in Windows 10, for these reasons:

( Please note that my intention is not to defame Stardock's products or dev. team, I had bought Fences years ago and Its a very professional application that I think everyone must have for desktop icons organization, I really can't live without Fences, so I appreciate Stardock's work. ) 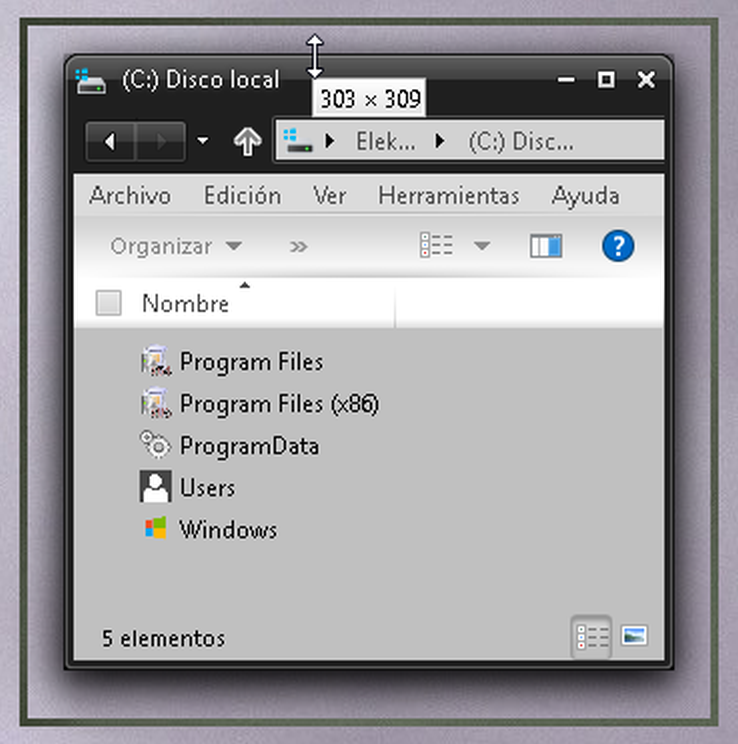 I have a conjecture: All custom themes are based on editing built-in aero.msstyles or aerolite.msstyles, located at %windir%\Resources\Themes\aero. aero comes with fixed 1px border, while aerolite has 1-8px border, configurable through registry or WSB (9px or above remains invisible). So far there is no public documentation on how to build msstyles from scratch. As such whether your theme has configurable visible border depends on which default msstyles was based on.

You are advised to seek professional assistance at Virtual Customs.

This may not be exactly what you are looking for, but it might assist you. If you go to System or right click "this computer" and go to properties, then on the left click "advanced system settings", click the button "settings" in the "performance" group box under the "advanced" tab, and then set the machine to "Adjust for best performance". After you do that click OK and let the settings kick in. Then try dragging a window around and you will see the "invisible" border box you are looking for that exists in prior versions of windows. Perhaps you can leverage that?

Stardock's WindowBlinds ($9.99, 30-day trial available) claims to be able to do this.

Here is an example from their demo for Windows 10 :

Have you tried Divvy? They have a windows version and I believe I use it in the same way you use Sizer. I just tested to see if I get a gap between windows using Divvy by putting a bright blue mspaint behind two chrome windows sized using Divvy and I couldn't see through the windows to the background.

I know it's a paid product and not necessarily the fix you're looking for but seems to be able to do what you want Sizer to do. Perhaps it internally corrects for the transparency you're mentioning in Win 10.

On the default theme, you can change the border padding, although the change will be invisible (you'll still be able to resize the window with the now-thicker border though). To do so, you just need to open the Registry Editor, and navigate to HKEY_CURRENT_USER\Control Panel\Desktop\WindowMetrics From here, just edit the value called PaddedBorderWidth. The formula is -15*border width, so if you wanted a 4px thick border, you can set -60. Just sign out and back in or restart and you'll be able to utilise the changes.

Alternatively, you can enable the Aero Lite theme, which is very similar to the Windows 8 theme. It already has the thicker borders by default but they can be customised the same way as above, however you'll actually see the changes. To enable the theme, navigate to C:\Windows\Resources\Themes\aero\ and run aerolite.msstyles (aero.msstyles is the default theme if you want to switch back).

f this is too much effort, you can use WinAero Tweaker, which has a GUI to alter all these settings and loads more stuff, and reset buttons in case you break something. However, as a general warning, there are some bugs with altering window border thickness and scaling, so I'd only recommend attempting this if you have your scaling set to 100%.

Not the answer you're looking for? Browse other questions tagged windows-10 window desktop-customization dwm visual-styles or ask your own question.

3
Windows 10 windows/dialogs now have no frame at all
2
On Windows 11, is there a way to make the window borders visible aside from the high contrast Accessibility options?

1
How do I fix Windows 7 rotating wallpaper?
0
Disable windows 10 invisible border grid function
3
How to disable the new "Auto Cascade-View" feature of Windows 10?
7
Make Windows 10 Taskbar like Windows 7
1
How to combine UI settings from the themes "Windows", "Aero Lite" and "Colored Title Bars"?
3
Windows 10 windows/dialogs now have no frame at all