I've had my share of broken storage media. During just last year, I've had:

At one point in time I've moved all of my data (documents, programs, etc.) into one 8GB encrypted file container (TrueCrypt) and moved this file onto one of the most expensive pendrives in its range (the 16GB Voyager GT mentioned above) hoping it will prove to be 100% reliable solution. Unfortunately for me, it broke.

So now I'm asking you for a recommendation of a portable solution (max size is 2,5" hdd) that would be (nearly) 100% reliable. Which will not break. At least not easily. 10GB storage is enough.

If 10 GB capacity is sufficient, then a 16 GB USB flash drive is the best solution in terms of robustness and reliability. A (synchronized) second stick, however, will double your chances to get your data home safely. :)

Have to wonder - why so much of your equipment is dying - environmental? Electrical(surge?) accident (drops?) or other? Your solution would have to incorporate protection against this.

Also, have you considered a remote solution - RDP into a system at home or possibly keeping things on the cloud? There are things like Microsoft Live Mesh.

Don't go with physical storage. Backup your data with Dropbox or to a server that is managed. Online space is pretty cheap, and you have full redundancy if they do daily backups.

If 10 gig is enough (and yeah, shouldn't it be?), borrow my procedure if you see fit : - 8 gig with all that data on USB-stick, hash and double/triple-check at will; one kept at each parent's house (this is of course something one has to re-adjust as one sees fit, in case no-one is to be trusted, two separate bank vaults would be my guess...hardcore though...)

Be ultra-prudent (parents do not live in same town as me, or each other (again....adjust as see fit))
and rigorous in regards to the what and the when and the where, stick to it; and you've got something that's kept me (a klutz of dimensions) knowing that my that is safe...

("that" seems to imply something....exchange with "my digital personification" or what-not...)

From what I've been reading you say, Paweł Gościcki, your main concern is not "portable" storage, but "encripting", "up to date" and "trusting services".

There are several points I'd like to address here, giving opinions and ideas. Sorry I don't really know any good ready solutions for it. But I guess some of them are available and others you may have enough frustration-power to build on your own.

For the breaking devices, even if you changed environment, I'd still bet it's some electrical issue - though it should not be if you really moved to far away. Removable media is more susceptible to static energy. If you are so consistent into breaking those gadgets you should really consider measuring more yours. I would.

For the "up to date", If I'm not mistaken, Dropbox (or maybe another service like Moby or Carbonite) actually is able to sync your files on your network without going to their server FIRST, so you really should give it a try as it would not consume your bandwidth. I haven't tried, but I think it would keep your 8GB chunk file in sync in your network, then you could use a second machine to open it up and sync to external media.

Even if there is no such option you could encrypt each file individually, rather than making that 8GB chunk that can't be easily synced. Get some script to first encrypt your files when you throw them in a folder and second throw them already encrypted on the Dropbox folder, or whichever. This won't be easy, maybe there's a solution already out there, but it's a simple idea to go around your issue. Of course, you couldn't backup your whole system like this.

And for actually using more portable devices, if you figure a service to use, or maybe using some sync software, you can get a second machine running with it and syncing everything you plug on it. That way you only sync your machine once with a device able to replicate external media at will, and easily.

Personally I just don't care about encryption. So I use the cloud, pen drives and time machine. Much simpler. :)

Hope I could be of any help.

Despite your bad experience with the Corsair Voyager GT, have you considered the Survivor series?

I don't think you will find something realistic that is more reliable than a USB drive, so in order to increase your reliability you have to implement some form of redundancy.

You mention having to sync 8 gigs of data each day - is all of that data really changing every day? Could you perhaps have separate encrypted volumes for stuff that rarely changes (no need to sync every day, perhaps every week or month) and stuff that changes daily?

If you're not happy with either hard drives or USBs (which you're not), maybe you can go with an alternative approach: tape backup ... they're not as common as they used to be, but they're still here, used, and some people I know swear on them. 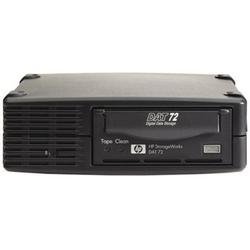 Apart from that (if it's only 16GB) you can also always burn 3 DVD-RWs.

I work at a university looking after the Sports School's IT issues. One fo the problems we had was that they were constantly trashing Portable HDD's. they get put in sports bags, camera bags etc and knocked about all over the place. We invested in 2 of the BUFFALO HD-PX320U2 and these have been going strong for ages now, we're about to pourchase another 5 we're that pleased with them. The capacity is higher than the specifications you've provided but thats never a bad thing if you don't mind paying a little extra.

I would advise you to try Transcend StoreJet. I have 3 of these drives and they are so shock proof that they can surive 6-foot falls. That's for the exterior, and from my experience (of having owned 10 hdds from seagate, western digital, and all other famous brands), Transcend has never given me problems. Infact, all of my Transcend drives are TrueCrypt encrypted and never had issues with bad sectors.

Since you don't have a fast up link, I would suggest you to give Transcend a shot.

How about making a RAID array of Flash drives? It seems like a simple enough solution, seeing your demands, and I'm sure there's ought to be a portable solution somewhere.

Without going into details here's a solution off the top of Google, though I haven't checked whether it'll port to other computers http://www.bigbruin.com/reviews05/thumbraid_1

If you can "break" your 8GB bundle back into individual files, you could consider Jungledisk

I would not go with HDD. I would use Flash Drive or something that you can drop on the floor without losing all data.

USB key is the best. You can also have USB Key up to 64GB. It's quite simple but simply the best thing you can have.

I think you have an abundance of replies concerning storage. You have had various types of devices fail on you. This is unusual to me. I would suggest you have all your computer needs powered through highly rated surge protection. That would include protection on everything including your printer and internet connection as well. You could very well be getting dirty electricity causing these failures or possibly some sort of static discharge.

Not the answer you're looking for? Browse other questions tagged storage or ask your own question.