How to hide the "ENG" language icon in notification area? (Windows 10)

This method is for older versions of Windows 10 - See the below answer by Anders_K for new versions.

When I do it in my Virtual Machine it is the same method as my Windows 8.1 machine.

Update: If the above does not work - Try the path Control Panel\All Control Panel Items\Language and advanced options will be on the left. 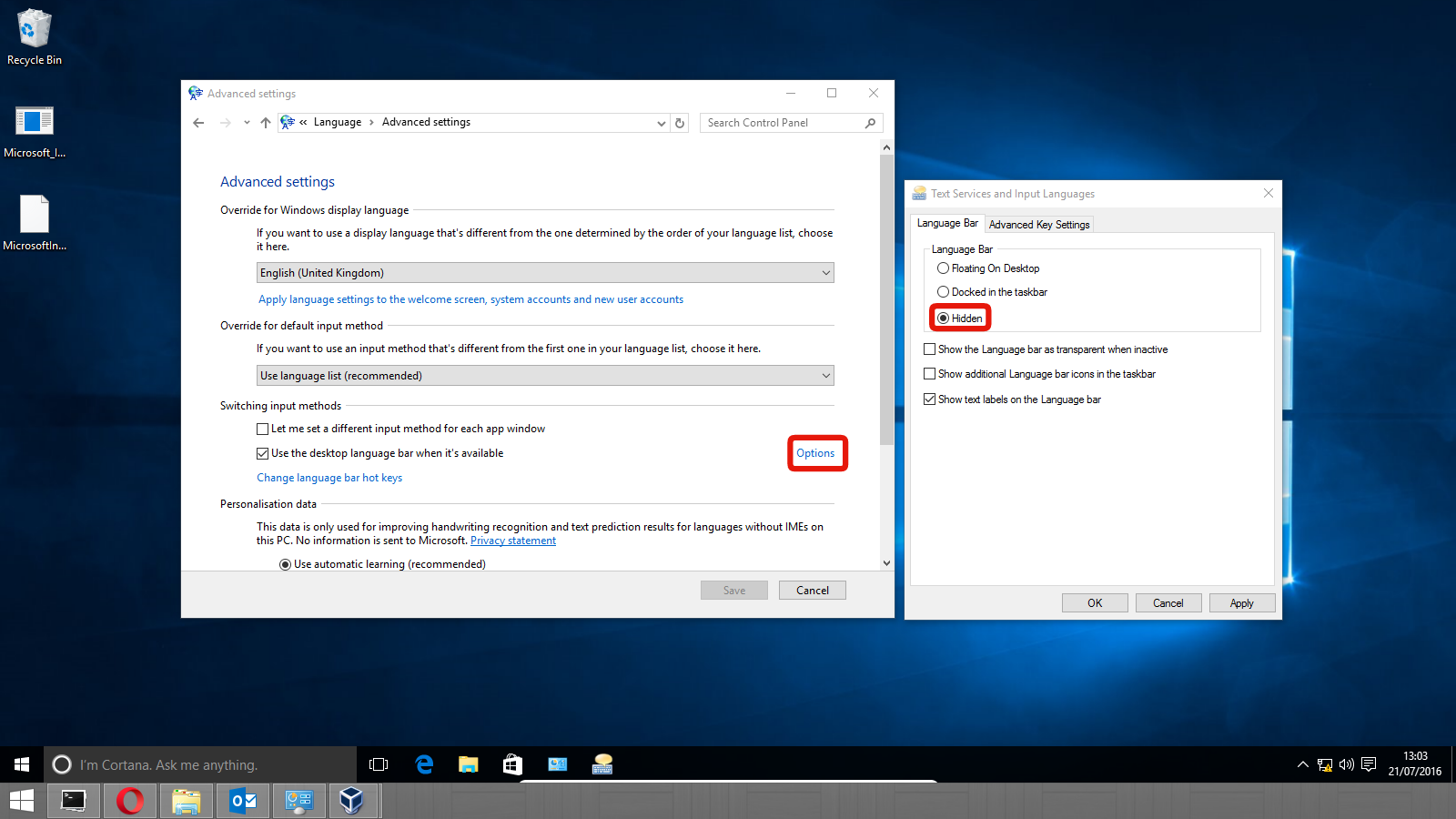 Turn system icons on or off

It should come right up. 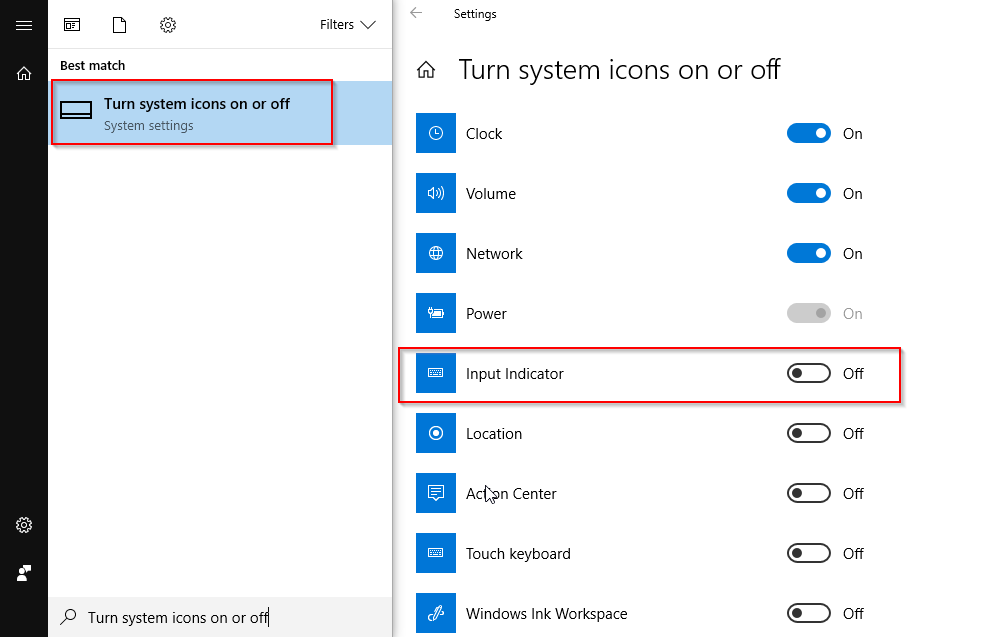 I had a similar issue recently, this is what I did to get rid of the language bar & input indicator. 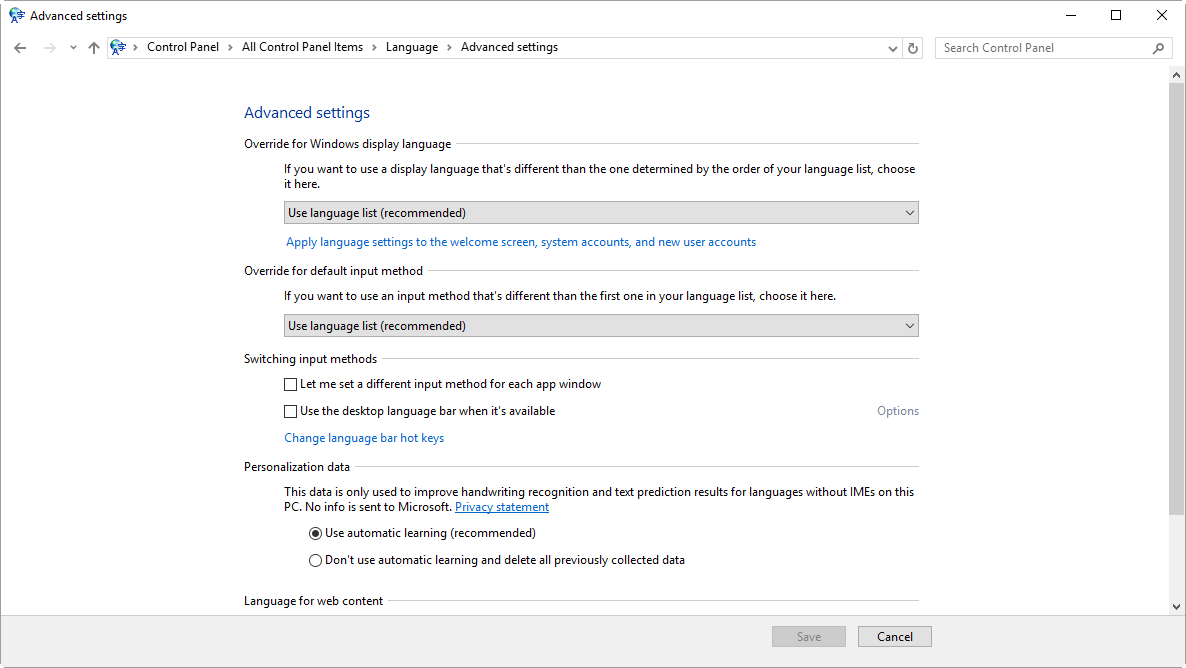 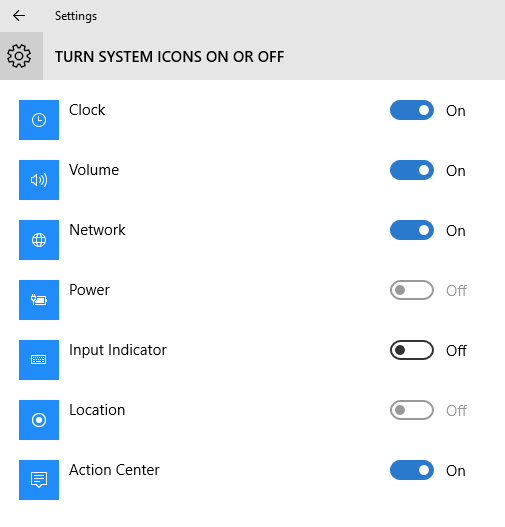 Neither of the above two answers worked for me, so I am adding this in case it helps someone in the future:

After having the language bar disabled and multiple input languages removed from my computer a long time ago, the "ENG" recently reappeared on my taskbar. I tried multiple methods of fixing it, but they were all already set to the correct values, which I had set long ago.

When I clicked on "ENG" I would get a list of two input languages, in my case "English (Canada)" and "English (United States)"

I only wanted English (Canada), and either way I don't want another icon on my taskbar. The confusing part was I couldn't figure out why it was there.

When I went to Control Panel -> Region & Languages, under Languages I only had English (Canada) listed. Like I said, all settings were already at the correct values. I don't know where the English (United States) was coming from.

What finally fixed the problem was in that same Languages page, there's a button "Add a language". So I did, I added English (United States). Then once it was added, I removed it.

Now the "ENG" bar is gone and everything seems to be back to normal. So if you're having problems, try just temporarily adding the language you don't want, and then removing it. Worked for me.

There seems to be 2 type of LANGUAGE icons in windows 10 at least, one is the one we were used to in Windows 7, and you could hide it right clicking it and changing the checkboxes.

is hidden by entering Taskbar Settings, then under Notification Area select "Turn system icons on or off" , then switch "Input Indicator" off:

is hidden by going to "Control Panel\Language\Advanced settings", and under "switching input methods" select options at the right of the "Use desktop language bar when it's available" line and hide it from there, if you click "Change language bar hot keys" link on the left instead of the right Options link you will be shown with the same window but nothing here had any effect on my taskbar icon whatsoever:

This appears to be a bug in the latest version of Windows 10. To hide the language bar, you have to turn it ON, then go to Options and Hide it:

(If you have the full Control Panel showing, click on Language || Advanced Settings)

This is counter-intuitive, I know, because if you UNCHECK "use the language bar when available", that makes it show on the task bar. That's why I think this is a bug.

You can also get to that screen by going to:

ps. One of the annoying things about Windows 10 is Microsoft has created this new Settings screen but also left the Control Panel. Both of those screens are portals to nearly the same sets of settings, but in totally different paths and with totally different looks. This can be very confusing to new users.

If you do not use multiple languages, you can also remove the languages other than your primary language. That also hides the ENG language selection icon. 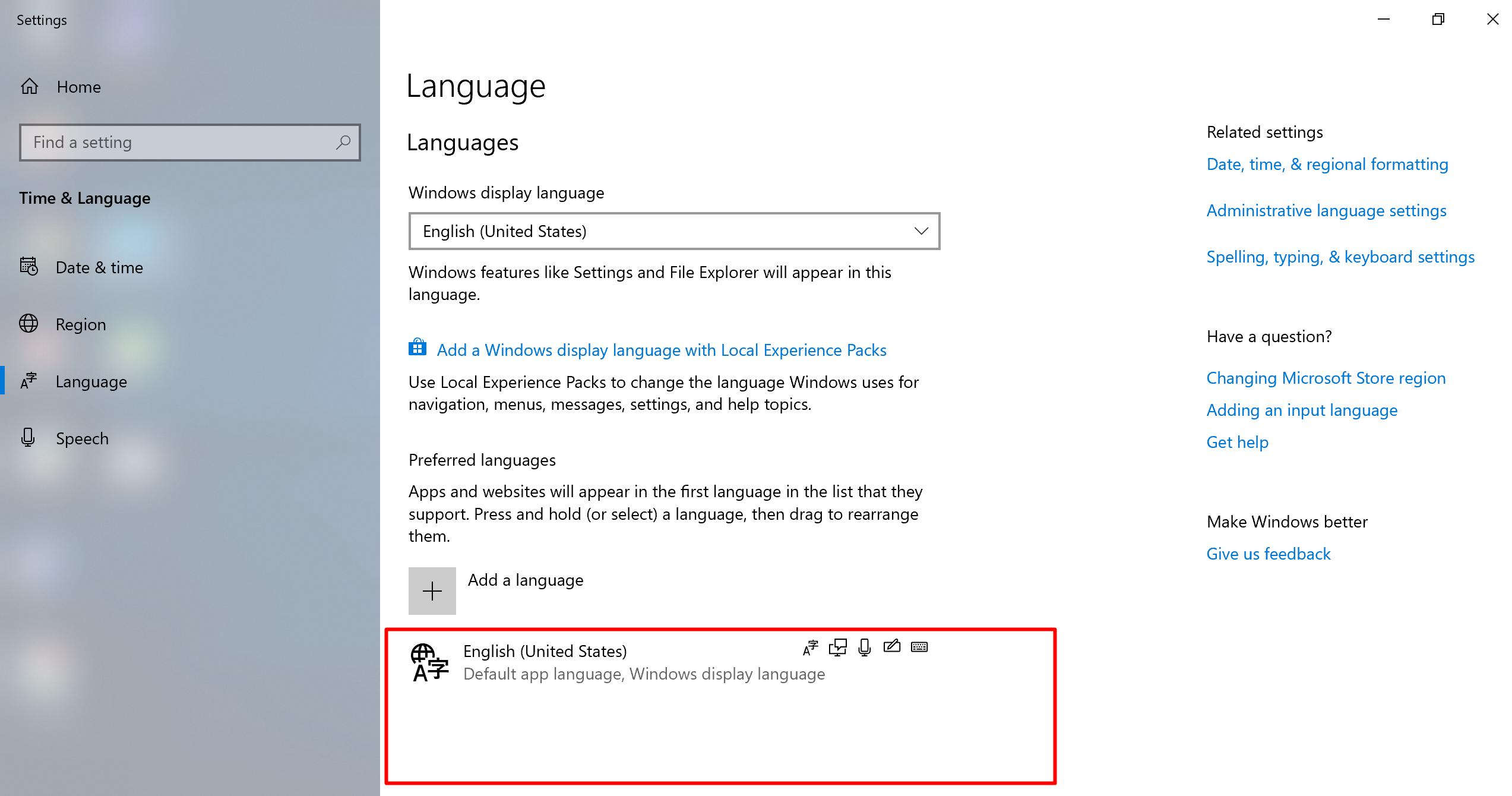 if you have the Canadian Language pack selected, add the US pack then move down the Canadian one and then you can remove that pack and the ENG will disappear! felt so go to see it vanish.

A lot of times the situation can be confused by the installation language of Windows. A lot of OEM installs are based on US English but installed on systems intended for other markets.

The OEMs use language pack installs to add regional settings for their intended markets and set the relevant defaults etc. but often don't bother to remove the unwanted/unnecessary language packs, so it is worthwhile checking that only one keyboard language is installed on a system before further investigation.

I wanted to turn it off programmatically in Windows 10 1909. but toggling the UI setting and checking the changes with Process Monitor didn't lead me anywhere.

The process that worked for me was enabling the (legacy) Language Bar, which if done via UI turns off the Input Indicator, and then setting it to Hidden.

The Language Bar setting is stored in HKCU\Control Panel\Desktop\UserPreferencesMask in the 6th byte (00 off, 01 on), but simply setting that value doesn't cause the Input Indicator to be hidden. Fortunately, there's the PowerShell cmdlet Set-WinLanguageBarOption that does the same as the UI.

Might need to kill explorer.exe or logoff to apply changes.

After an update, the ENG reappeared in my taskbar.

This time, I found that changing the 'system locale for non-unicode programs' to my region of ENG (UK) and rebooting has made it go away.

As I write, this setting is found in Control Panel / Clock & Region / Region / (Administrative tab).

Turning Off the "Input Indicator" from "Turn system icons on or off" seems to be the only working option, all other are useless and really seems to be a Bug of the latest upgrade.

imply right click the ENG in the notifications bar.

You will probably see more than one language eg British and US.

Remove the one(s) you don't want.

If there is only one left it won't show

1
Windows Notification Area Icon Groups
0
hide the program icon and its name when alt+tab on Windows 10
3
Windows won't hide my notification area icons, even though I set them to hide
6
How to show VPN active Icon in the Taskbar Notification Area?
1
What does plus icon mean at the bottom of folder icon in windows 10?
0
Windows 10 no language icon on the taskbar
1
show/hide specific icon on windows notification area with command line