I have both the system monitors of KDE and GNOME. When I compare the CPU usage of a CPU intensive program, that of KDE reports a 30% usage and 3GB of memory while that of GNOME reports 300% of CPU and same -3Gbs - of memory!

A modern CPU has multiple cores.
If you have a process that is using intensively 3 cores it can be reported to use "300% of CPU usage", its cumulative value, as well as that value divided by the number of cores.

Sometimes it is more useful the first, some other the second. Often it is possible to choose as option.

Under KDE, when you press Ctrl-Esc, it starts the System Activity [1]

Stopping the cursor over one of the CPU values shown, you will see a mask with some information more. 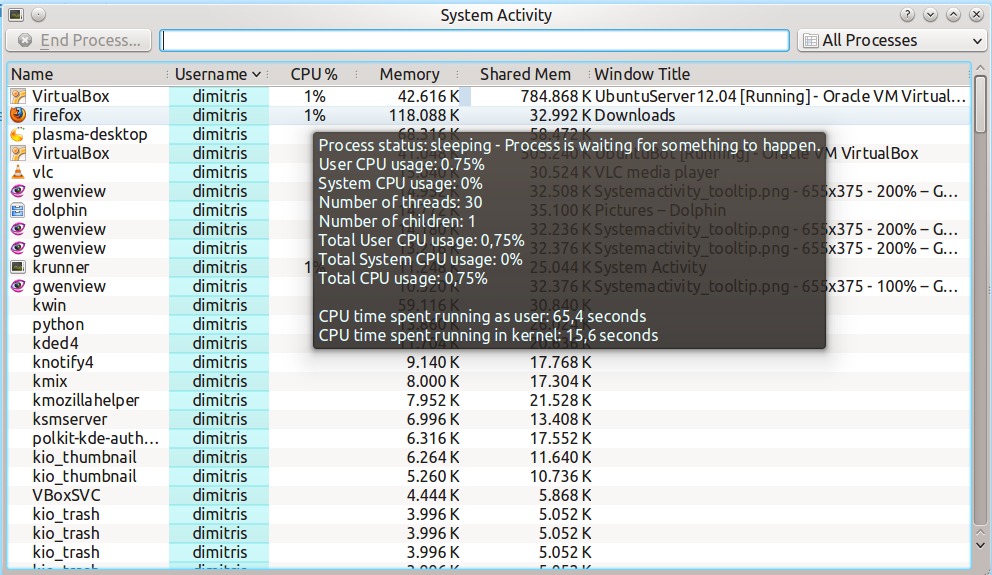 If you right click on the bar were is written USERNAME, CPU... over CPU it will be open a pull-down menu with the possibility to divide the CPU Value shown (cpu usage) for the number of CPUs (core), or to show the full value.

10
Implications of running KDE application in Gnome
36
What is Gnome / KDE etc?
1
How to install and run KDE and GNOME?
6
Kde equivalent of `gnome-open file` command
3
Installed KDE, now GNOME has kde default cursor
5
Reset KDE System Monitor (KSysGuard)
21
How do KDE applications run under Gnome?
1
Check total usage of physical memory and CPU for a program on Linux
0
How do I de-KDE gnome?