I was transferring some large files from my SSD to HDD, and looked at the Task Manager to see the usage of the drives. Here is a screenshot: 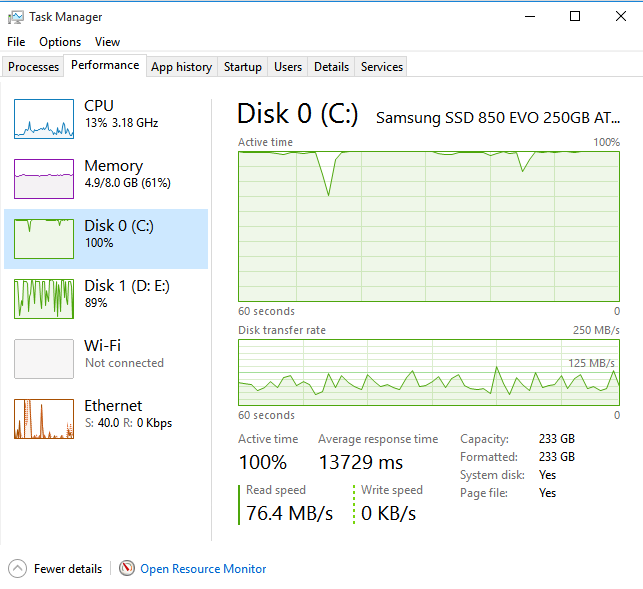 What this appears to show is my SSD working 95-100% all the time, and my HDD fluctuating between 50 and 100, which may mean that it is waiting on the SSD for the files to be read. Additionally, starting any programs on my SSD became very slow when the files were being moved. Is it possible that my SSD is actually slower then my HDD?

EDIT: I don't find the question that has been marked as duplicated from to be at all relevant. He is asking for a benchmarking tool, which I'm pretty sure goes under the "Opinion based" category anyway, and is completely different from my question which asks for reasons behind a bottleneck.As can be seen below it has attracted a completely different answer, to which I found to be useful.

Is it possible that my SSD is actually slower then my HDD?

Yes, that is possible. It is not the case that all SSDs are faster than all HDDs. There are very fast SSDs, and there are SSDs which are slow, even by rotating rust standards.

If that is the case in your situation os nothing we can answers based on just the information in your post, however consider these points:

So, answering on information provided: Yes, it is possible.

Not the answer you're looking for? Browse other questions tagged windows hard-drive ssd performance or ask your own question.

20
How can I enable AHCI on a SATA drive after installing Windows?
7
Can I change from BIOS IDE mode to AHCI mode at any time?
2
Compare HDD and SSD performance

1
Program Files on both SSD and HDD?
0
Optimizing SSD storage usage on an SSD (primary/boot) & HDD (secondary storage) combined desktop
0
Copy only OS which isn't partitioned to SSD
5
File moved from SSD to HDD in splits of seconds
0
Win 10 won't load from SSD without old HDD
0
File transfer between two HDD seems to slow down other activity on main SSD
1
Cloning HDD to SSD without Free Space