Color Calibration of two Dell U2415 monitors - both too yellow?

I am hooking these two up to a single laptop, an ASUS GL551K running Windows 10. One of them is via the provided Mini DisplayPort cable, the other through an HDMI cable to HDMI input on the monitor.

The problem is they both look bad. The whites are yellow, and as someone who stares at a sea of code all day, none of the colors look familiar.

They look fine on the laptop, nice bright whites, but both of the Dells are no good. I hooked it up to a Mac and it looks a lot better on that side.

To make a long story short, I have tried all of the following, and am unable to get a pure "white" color on either of these two monitors:

I highly doubt that I could get delivered two top-selling 24" monitors and both of them have a problem, so I'd just like to know how to adjust this. I went through other tutorials step-by-step, and so far, no luck.

I understand there are a whole host of "taking a photo of screens" when it comes to color calibration, but this is what I see ... close enough, anyway: 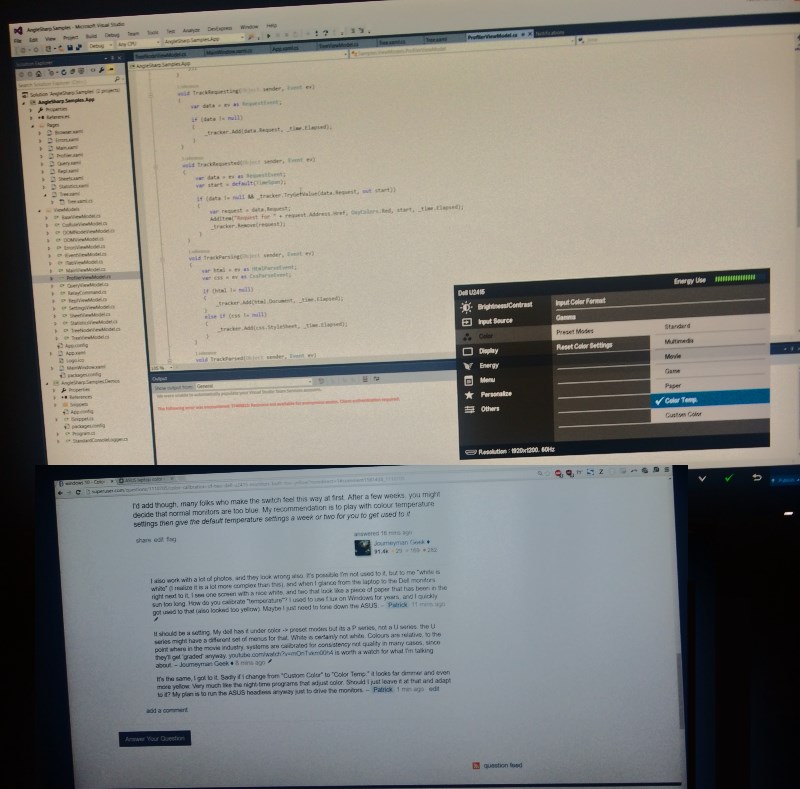 Your current monitors might be 'wrong' and your previous monitors were calibrated against a different colour temperature.

I had the very same issue in the past with my first colour calibrated, IPS display, and once I got to used to it everything else seems too blue.

"as someone who stares at a sea of code all day" - as opposed to photos and images. The 'classic' colour temperature is 50K and many photographers and image professionals prefer that. Most computer monitors seem to be at 65K, which is bluer and there's a lot of folks who claim its more fatiguing, or downright claim its bad for you.

You might want to adjust your colour caliberation to a different temperature - on lesser monitors this would be called 'cool' or roughly about 65K if that's an option.

I'd add though, many folks who make the switch feel this way at first. After a few weeks, you might decide that normal monitors are too blue. My recommendation is to play with colour temperature settings then give the default temperature settings a week or two for you to get used to it

I was able to figure this out thanks to @JourneymanGeek and a bunch of trial and error.

First was the link that showed this:

So I removed this ASUS utility, and rebooted. It already looked better, but required a few more modifications on the Dell monitors.

That brought it right in-line with the ASUS on both of the Dell's.

Then I went into the color calibration settings on the monitor itself, and instead of "Temperature", I changed it to "Movie" of all things.

Edit: Just to update in case anyone else has this problem, I've looked into it further and it was mostly the ASUS driver. It turns out that Temperature did actually work the best for me, at a value of 7500K. YMMV.

To me this looks look more "correct", as the white is clearly more white than a newspaper left out in the sun, as you can see in my image below.

Before and after (the laptop looks slightly different only because it was angled wrong in the second one):

Keep in mind I have no idea what I'm doing, I'm not a professional photographer. But I do stare at a monitor almost all day, every day, for 15+ years ... so I've gotten used to seeing one thing.

I certainly would not want to stare at this sort of thing at 2 AM, as it's rather blinding. But it's not faded yellow!

This fixed that problem, if it helps anyone else.

Different monitors/laptop screens differ in default color temperature and brightness. Without that, the most blueish, brightest display will probably look like "pure white". BTW the only "pure white" is a 100% diffuse perfect reflector material and its color will change depending on the light that falls on it. If you want your monitor white to exactly match this you must measure/control the ambient light (color and intensity) at the exact position of your monitor and then calibrate the monitor to that.

Not the answer you're looking for? Browse other questions tagged windows-10 multiple-monitors colors calibration or ask your own question.

4
Asus Windows 7 laptop's external monitor has a yellow tint
0
How can I improve yellow tint of on monitor?

12
Calibrate two monitors to the same video settings
6
How do I connect two monitors to a laptop without a docking station?
1
Dual Monitor Color Issue
0
Is my new monitor defective or my eyes?
0
Dell Precision 5520 - 2 monitors, one is fine the other's resolution is messed up
1
Exactly same monitors bought 4 months apart, not the same output?
1
Avoiding a fuzzy display when using 2 monitors through a Dell WD15 dock