How to set input grab for VMWare Workstation Player 12

It is very annoying that when my mouse cursor leaves the window of my VMWare Player, it losts focus and I can't type anymore (lots of wasted energy).

So I checked if I could modify the input settings and found this documentation:

It shows that I can change the Input settings but it is for a very old version (v4) and I couldn't find any preference like this in my Player, I have only this: 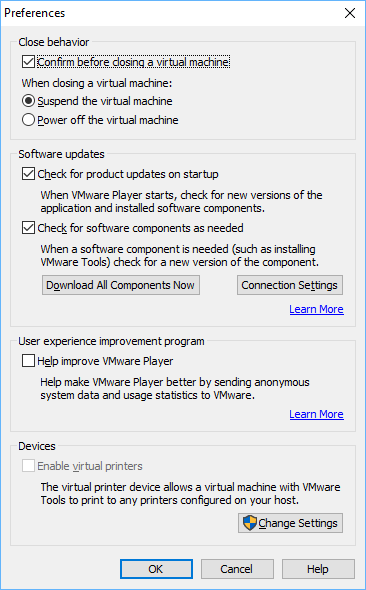 How can I set these in my Player?

Workstation and Player share the same preferences file, so changing preferences in one usually affects the other product, even if that other product doesn't provide UI to change certain options. You could try manually modifying your %APPDATA%\VMware\preferences.ini file and adding pref.motionUngrab = "FALSE".

Alternatively uninstalling the VMware mouse driver in the guest should work too.

@jamesdlin's answer is correct, but there seems to be some hidden characters in the pref.grabOnKeyPres‌​s = "TRUE" text of that answer (and I don't have the reputation to edit it or comment on it). When I copied that text and pasted it into %APPDATA%\VMware\preferences.ini, VMware deleted the line on next launch.

To recap: Close all VM instances and add one (or both) of the following to %APPDATA%\VMware\preferences.ini. These work as of VMware Player 15.5.

pref.motionUngrab = "FALSE" will lock the mouse in the VM anytime you give the VM focus and will require an unlock (usually CTRL+ALT) to free the mouse. This too solves the keyboard focus issue since the mouse cannot drift outside, but has added step of needing to unlock the mouse to work outside the VM.

You generally only need one of the two options. Personally, I prefer pref.grabOnKeyPres‌​s = "TRUE" as it behaves more like the standard Windows focus manager and is good if you move between windows a lot.

Not the answer you're looking for? Browse other questions tagged vmware-workstation or ask your own question.