Are GPT partitions less likely to get corrupted than MBR-based partitions?

GPT (GUID Partition Table) partitioning has some benefits over MBR (Master Boot Record), including Support for:

But are there any other benefits like less likelihood of corruption? (The two HD failures I've had were corrupt MBRs). Or are you just playing wack-a-mole where the GPT then gets corrupt in the same way?

According to Wikipedia, there is redundancy in the GPT scheme. The GPT table is written at the beginning of the disk, as well as at the end of the disk (see image). In addition each GPT table has a CRC32 checksum. 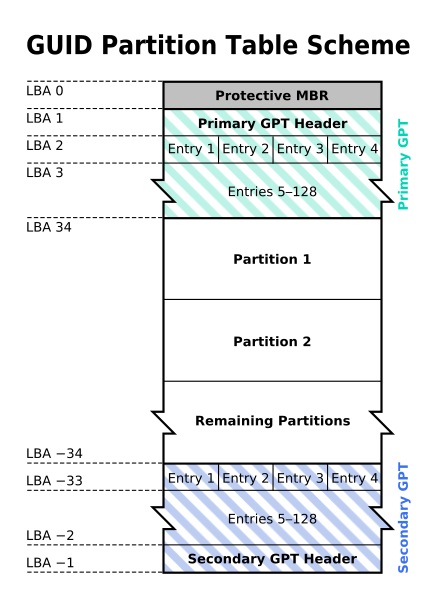 The redundancy is not available in the MBR scheme (which only occupied the first 512 bytes of a disk). The extra redundancy would allow for more resilience against corruption. The CRC32 checksum allows the system to detect which of the two tables is the correct one to be used to repair the other.

Not the answer you're looking for? Browse other questions tagged windows partitioning mbr gpt or ask your own question.

1
Master Boot Record failure
3
What does the Boot Camp Assistant do to my drive that I can't just do with Disk Utility?
3
MBR partition with more than 2 TB
2
Can external HDD be larger than 2TB with MBR?
1
Windows ignores GPT disk and converts to MBR during installation
8
Making sense of the 2TB MBR partition limit
0
Editing the GPT in MBR
0
Bootcamp Windows 10 in Legacy BIOS mode reports external pure GPT disks as MBR. Why?