I am an Android developer and spend a lot of my time waiting, so I have started considering a a dual Xeon setup.

I know that, for example, for a 3D rendering solution - the additional cores improve the speed pretty much linearly, so my question is - will Android Studio build times decrease the same? And if not linearly then at least noticeably to make the upgrade worthwhile?

I know AS has multicore support, but just wanted to make sure it will use all 20 cores the same as it does 4 before I go out and spend the money.

Would be great to hear from someone with experience comparing dual Xeons to i7 setups for same project builds, but any info will help!

Before you recommend to look at other ways to improve speed - let me assure you that I have tried about everything - fast SSD, plenty of RAM, all the possible Gradle and IDE options, abstracted some dependencies to build for release builds only to avoid multidex, latest AS version, Instant run / JRebel etc.

So I had to find this out the hard way. In my case, with my project and hardware it did not use all the cores. I've done some basic benchmarks with different hardware I had, but take them with a grain of salt - you should understand that requirements and setups can affect outcome tremendously.

So this is the hardware I had:

All running at base clock with hyperthreading. And the SSDs:

Each drive had Windows 10 installed, so I've tried to test two things - processor speed and drive speed by swapping drives between computers.

Read graph from bottom up: 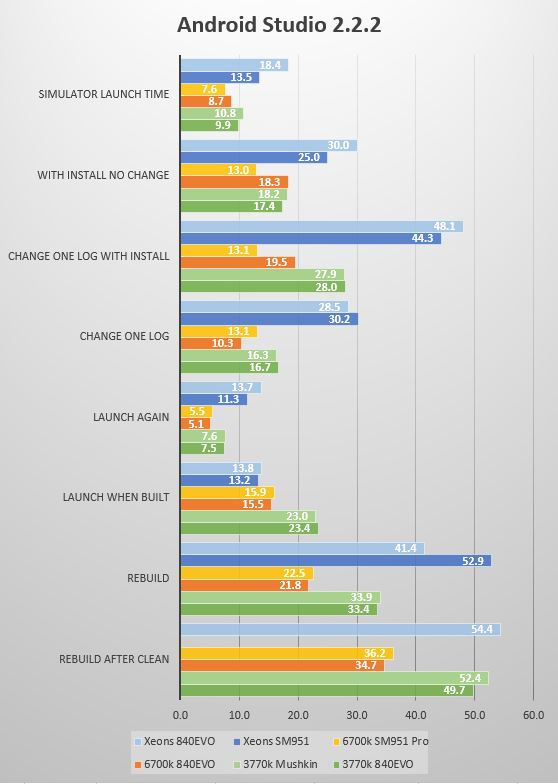 So the process, which wasn't very scientific, involved repeating tasks a few times and then taking the average of those.

Launch when built: Launch and note gradle time upon first launch after rebuild

Change one log: Change string inside Java's Log.v and rebuild

With install no change: Time taken from pressing run button to opening on screen

The conclusions for me were that:

Hope it helps someone!

There is one more option to increase build speed: when you make your app modular, it will build asynchronously, so each module will take it's core of CPU.

And one more thing. Mind your libraries. For example in most cases you don't need the whole google support library, exclude unused parts, or import only needed.

And one more thing. I do not know how the OS influences the build speed, but I think it somehow does. When I use Linux vs Windows, it is much faster to build the project.

On my another working machine: Core i5 3.0 Ghz 7400, RAM 16Gb, SSD 250Gb. Build time takes 4.34min on Windows 10 machine. The same project on a little bit slower processor, but with the same RAM and SSD and it is running Ubuntu 16.04 build time takes two times faster!! Well I was shocked with results, but still I choose Windows as development machine, because it's much more comfortable for me to use comfortable and usable keyboard and sotfware than on Unix like systems. And even if I had to choose between MacOS and Ubuntu - mac is really much easier to setup everything, and Ubuntu is too complex to use for usual people. Choise is up to you.

Not the answer you're looking for? Browse other questions tagged intel-core-i7 build xeon android-studio or ask your own question.