What is the “Web Compat” Firefox addon - Avast suggest removing

I'm using Firefox 48.0.1 and I just booted Firefox up and I got a warning from Avast about a addon with a poor rating, the exact screenshot: 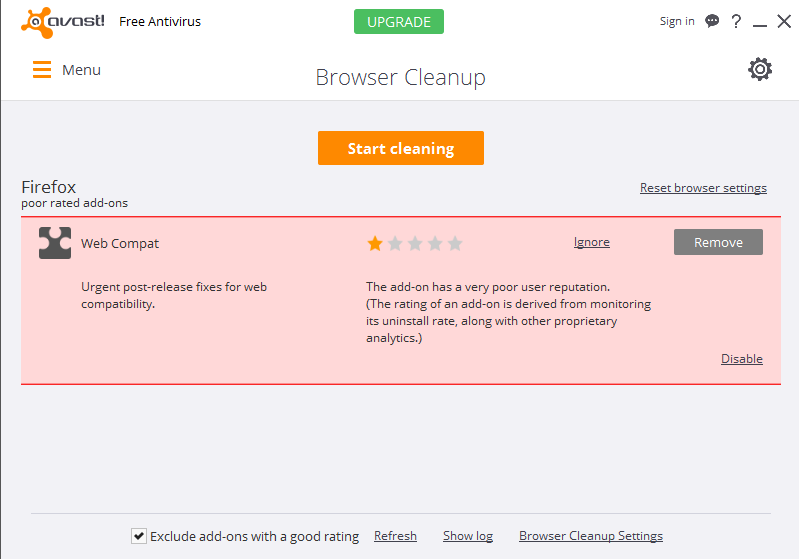 I don't recall installing this addon and I can't find it on the official Firefox addon store.

Does anyone know what this is and if I should remove it?

Full disclosure: I am a Mozilla employee and in fact one of the developers working on the add-on in question!

It is true that we're now releasing some features internally as something we call "System Extension", which technically is the same as an addon you could install on addons.mozilla.org, with the difference that these come pre-installed with Firefox and there is no way to disable them. We mainly do this to be able to ship updates faster, but it's also nice that we have some features totally separated, which makes the development process easier for us!

I am highly confused that Avast claims our system addon is evil. The version of our Webcompat addon that is currently included in Firefox does absolutely nothing: it's just a placeholder for us to replace once we have built what we are building. I'd really love to know how their "proprietary analytics" looks like and why we get rated that bad. However, I can assure you we don't do anything evil! :)

I highly doubt Avast is even able to disable/remove system extensions, but even if it is, you absolutely should not do it. Some system extensions may actually have dependencies into others, and stuff could break horribly if one or more of those are missing, so please don't remove them.

As for the addon itself, let me explain what we plan to do. The description already says "Urgent post-release fixes for web compatibility" and that's pretty accurate. The WebCompat team at Mozilla ensures that the web works in Firefox, basically. Sometimes, we release a change inside Firefox that may break specific websites and we need to do something about this. We use this system extension to ship such fixes whenever needed. If you want to, feel free to read more about our Web Compatibility efforts in our wiki!

Today I had the same Avast warning: Mozzilla announced in July 2015 to detach part of Firefox's core functionality into so called system add ons in order to go faster. Different from user add ons, to adapt Firefox to your user needs, these system add ons are not managed with the Add On Manager. Not beeing a developer and using Firefox as my browser I won't mess around with system functionality. (And certainly not based on an anonymous rating mechanism of AVAST which does not even pretend to have identified a technical risk and just argues 'do what everybody else is doing!') Im sorry that the source I can refer to for further reading is in German. https://www.camp-firefox.de/node/1405

I won't allow AVAST to remove part of the system functionality of my browser, and would nobody suggest to do so.

Not the answer you're looking for? Browse other questions tagged firefox browser-addons firefox-extensions avast or ask your own question.

5
Group-tab addon for firefox
0
Firefox Addon to follow links by keyboard?
2
Firefox addon “keyconfig” seems to be unique… But why isn't it in Firefox's repository?
1
Using the Firefox addon “Modify Headers” to change Referrer
3
Firefox 4 upgrade broke R-Kiosk… Easy work around?
2
Finding the culprit behind “Another program on your computer would like to modify Firefox with the following add-on”
3
Disable Firefox synchronisation for a single addon