How many port adapters, and which ones can be stacked up and actually work? 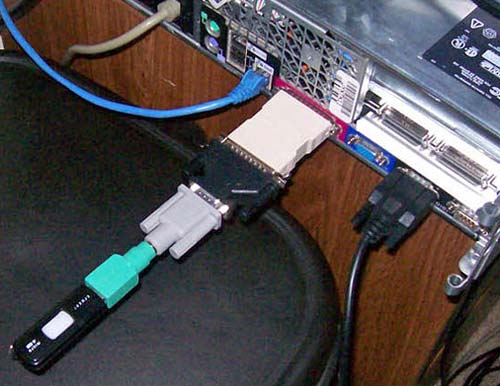 Why, exactly? And, specifically, at which point the stack of adapters stops working?

None of them will do anything you expect. At all.

The green one is a USB to PS/2 converter, it is a wire converter rather than signal converter. It will only work if the device you plug into it can detect how it is connected and speak both languages. Your USB stick will not do that, a USB mouse might.

The next is a PS/2 mouse to serial converter, again the PS/2 device needs to understand both connections. A USB stick cannot talk through this.

Next is a 9-to-25 pin serial adaptor, nothing special, just more unconnected wires. No talking from USB.

Next is a 25 pin gender changer, allowing the 25-pin female serial converter to plug into a 25-pin female parallel port. Neither the parallel port nor USB device will understand the meaning of whatever wires are wiggling at them, if any of them are at all.

If I get bored later I might try to chase the theoretical pinouts, but it seems a bit pointless in all honesty.

It is a useless mash of connectors that will achieve nothing.

To answer the "at what point does it stop working" part, it depends what is being converted.

I personally have an old AT keyboard, into a AT/PS2 converter, which connects to a PS2/USB converter and connects into a USB KVM. That's two adapters in a row, or three if you count the KVM.

Any number of extenders or joiners would work, up to the point where losses across joints or total cable length is excessive. So 100 1 metre ethernet cables and 99 RJ45 joiners might work, but that's not an adapter and is against the spirit of your question.

I believe the picture shows a general RS-232 full-size DB25 COM port, and not a parallel port. Technically the stack-up should work with a special USB/PS/2 compatible mouse, which operates in LS USB mode (1.5Mbit/s).

However, the picture shows a USB stick, which can operate only at FS rates (12Mbits/s) and above. This "setup" will not work because the setup can operate only at 1.5Mbit/s USB 1.0 rate, while the FS USB device needs serious processing of data signals at 12 Mbit/s, and needs a carefully scheduled special service from PC host, which cannot be provided by COM port.

So the simple answer is: the COM port PS/2 to USB converter cannot provide the necessary communication speed nor proper USB protocol for a FS/HS memory stick. Specifically it "stops working" between the stick and green USB-PS/2 adapter.

ADDENDUM1: one fundamental evidence that this setup is a joke is that neither EPP or COM ports have any 5V power, which is necessary to power the USB stick.

ADDENDUM2: yes, this is the PC parallel port, per description of DELL 2550 sever, and thanks to "plugwash". The PP is worse, since PP does not have any UART serdes conversion hardware, and bit-banging of the port from x86 PC is clearly out of range for 12Mbps receiver processing (which needs 20ns sampling/reading rate).

just to fill out some of the gaps in our answers here, since I cannot comment, I'll add in some information here.

The port that this Rube Goldberg adapter is connected to is definitely an IEEE-1284 Parallel Port - as indicated by the Burgundy coloration surrounding the 25 pin port, which fits both PC99 and PC 2001 PC System Design Guide specifications:

Next in the chain, is a 25 Pin Male to Female Gender Changer. While these are typically straight thru connections, application is limited when it comes to Parallel applications - typically, these were used for Serial or SCSI cables.

Further down the chain, is a 25 Pin to 9 Pin RS-232 Serial Adapter - which have a totally different pinout and any electrical signal from this will not be understood by the Parallel port.

In Theory one could write a program - assuming that one could trace all of the electrical connections, make sure the proper voltage was able to be routed (most likely by crossing some of the connections in the 25 pin M/F Parallel Gender Changer) and writing a program to reinterpret the signals the Parallel control chip was receiving/transmitting - to make it work, but since USB is so ubiquitous unless there was a very specific need for this to happen it would be a titanic waste of time and resources.

In the depicted chain of adapters there is exactly one pair of adapters which can be expected to work together. That is the grey PS/2 to DB9 converter and the black DB9 to DB25 converter.

The grey adapter was most likely included as accessory with a mouse from the 90s. By using that mouse together with the grey and black adapters you can connect the mouse to a 25 pin serial port which were common in the 80s and early 90s. And that combination would work.

The depicted computer appears to have a 9 pin serial port rather than a 25 pin port, so the black adapter is useless with this computer. The grey adapter could be plugged directly into the computer.

The white gender change adapter is unlikely to be useful in the depicted context. It connects a serial device to a parallel port. Some of the pins in the parallel port on the computer can be programmed as GPIO, and if by pure luck all the relevant pins in the serial port are connected to GPIO pins on the computer, then in theory you can program the serial protocol in software rather than relying on a UART. But if the devices you connect in this way aren't compatible in terms of voltage and current there is a risk of damaging some of the equipment.

The green adapter is intended to connect a USB mouse or keyboard to a PS/2 connector on the computer. As far as I recall such adapters were invented in the late 90s and they only work if the mouse or keyboard used is built with the necessary backwards compatibility. I would not be surprised if circuitry designed at that point for USB mice and keyboards is still in use today since there has been little reason to update it.

In theory there could exist a USB mouse with backward compatibility all the way back to serial communication, in which case the green, grey, and black adapters could all work together. Though I don't think such a mouse exists since at the point where the USB interface with PS/2 backwards compatibility was designed it probably felt like a good time to ditch the serial port backwards compatibility.

I have only tested a single Logitech USB mouse for backward compatibility with serial, and that mouse didn't work on a serial port. It only supported USB and PS/2. Others may have more empirical evidence suggesting how likely it is for a random USB mouse to support serial ports.

Not the answer you're looking for? Browse other questions tagged usb serial-port adapter ps2 parallel-port or ask your own question.

0
Which of these wireless adapters work in windows 7?
3
Will Parallel-port dongle work on USB-to-Parallel Adapter?
3
Anybody still making inkjet printers with parallel port interfaces?
1
How can I get a device with parallel interface to work on my laptop?
1
If I plug a two serial devices into usb adapters both into a single USB hub will my computer see two different COM ports?
2
What does the direction of the arrow mean on DVI to VGA adapters?
0
How to determine which physical port is connected to which tty path?