So, I'm looking for a command-line approach to get a short(ish) textual dump of relatively low-level metadata for a file, approximately the same way that stat does on *nix systems.

In other words, information that's readily available through Win32 or NT file APIs without actually reading the contents of the file, and definitely without having to go anywhere near the Shell (as seen in Explorer and the Save/Open dialogs, and anything using shell32.dll).

On NTFS, this info would tend be stored in the file's MFT entry, though I've heard that exactly which attributes end up in the MFT proper depends largely is largely a matter of which will fit, since many attributes are optional, repeatable, and/or variable size, some can be , though it's also possible to use more than one slot in the MFT. (In fact, it's even possible to store a file/directory's full contents in the MFT if the other attributes don't take too much space!) So, um, obviously "appears in the MFT" can't be use to actually define what I'm looking for.

Also, I'm not looking for tools that parse NTFS itself, or only work on NTFS filesystems: I only mention NTFS because, well, what other local FS is going to support more NT-specific things?

For concreteness, here's the stat on the Debian box I'm using as a router:

And here's the one from Git for Windows: 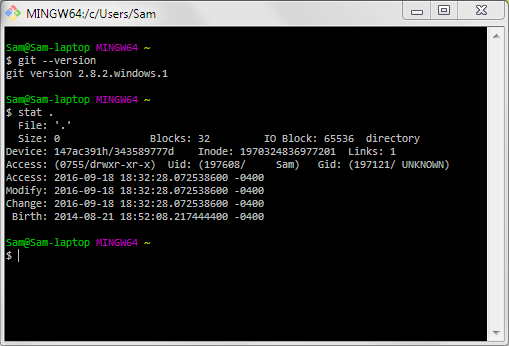 At this point, I was going to say that the "Birth" timestamp field is a Windowsism, but clearly that's not quite true because Debian's stat shows the field, only it's empty above because the filesystem doesn't actually have that field. (Which is, at least, much clearer than the "Access" timestamps: neither system is updating those in the traditional strictatime manner.)

Also note how the Windows port is displaying made-up file access permissions, an implausibly-large "inode number", and what I can only assume are also made up UID/GID numbers (on account of how NT uses variable-length hierarchical identifiers rather than fixed-size numbers to identify users and groups, and doesn't permit both user and group ownership at the same time; that is, on NT a file is owned by a single user OR group, and anyone else just gets their rights from the ACL).

Does MS provide a tool of this sort, presumably one that shows more actual information and less fairyland information?

Yes, I know there are ports of stat, but (a) I'm concerned that information might fall through the cracks if:

and (b) I was wondering if Microsoft supplied any analogous tool(s).

But really, any command-line way get sort of information stat might provide (regardless of whether it involves a program called stat), along with a description of the more-or-less NTFS-specific information it provides, would be of interest.

P.S. I'm on Windows 7, but don't let that stop you from mentioning things first shipped for/in later versions of Windows.

I just threw together a PowerShell script. It includes pretty much everything that makes sense for Windows, except the access controls, which are usually too large to fit in a summary. You can see them with the icacls utility.

It uses the normal .NET/PowerShell file system entry properties and calls out to the fsutil utility for the tricky stuff. Since that utility isn't a PowerShell cmdlet, I had to do some messy string chopping to get the right information.

To use it, save it as a .ps1 file and see the Enabling Scripts section of the PowerShell tag wiki. Example of output:

Get-Item /path/to/file | Format-List should get you what you need using only native Cmdlets.

Get-Item gets the details about whatever file you are interested in. Format-List will, somewhat unintuitively, expose more parameters to the PowerShell host than would be seen otherwise. It also formats it as a list, as you would expect.

If the verbosity bothers you, you can use aliases to shorten this to gi /path to file | fl

There are no exact equivalent but the closest you can get with Windows built-in utilities is with the fsutil command. It'll give you most of the things stat provides, along with more detailed information about the underlying file system structure. But unlike stat it needs to be run under administrator rights. You can also use wmic (or the Get-WmiObject (gwmi alias) PowerShell version) for a lot of useful data. For a few other options you need to get with other commands

Below are how to get the analogous information to the format options in stat (in PowerShell, with cmd version if available) that you can use to customize the output. Otherwise just dump the fsutil file layout, fsutil fsinfo sectorinfo and fsutil fsinfo ntfsinfo output directly

The (Get-WmiObject win32_ALIAS | where { $_.FILTERFIELD -eq 'VALUE' }).GETFIELD commands above can be changed to wmic ALIAS where FILTERFIELD='VALUE' get GETFIELD /value. However wmic was deprecated so in the future it may be removed

The tool you're using is using an environment that acts as a thin layer between Windows and Linux and as such needs to emulate certain bits and pieces to let Linux tools do their thing. This explains why there is some fabricated information which is (hopefully) matched in a consistent matter. You'd have to look at the specifics of the environment implementing it to make sense of it.

On the other hand it's (for me) not exactly clear what you're looking for. As you said there are various APIs available which you don't want to use. Is just that "emulated" information relevant to you?

Otherwise you'll probably need an array of tools to get all the information you need. Access rights and ACLs are pretty deeply rooted in NTFS to my knowledge. Tools like icalcs could help you with getting information on the access rights on a command line basis. To get more indepth information (for parts of it) you might want to consider using WMI as shown in that example. A simple dir or get-childitem from a PowerShell might give you more information about the creation times and such. I don't know about any built-in tools that give you a run down on all of that information. What you might do is use the information about the APIs and wrap them in a PowerShell script. This might come close to what you actually want to do. I'm not sure if there is a script out there that does that already.

67
Windows: List files and their permissions (access) in command line
33
The last access date is not changed even after reading the file on Windows 7
22
Is there a way to get file metadata from the command line?
20
how to know if noatime or relatime is default mount option in kernel?
4
Information about a file or directory
3
How to read MFT on USB Hard Drive (NTFS, 1TB)?

29
How do you defragment the MFT on an NTFS disk?
1
Linux cp Permission denied on ntfs file system
3
How to read MFT on USB Hard Drive (NTFS, 1TB)?
8
How do I delete a file that Windows says doesn't exist?
2
Ntfs Control MFT Growth Increment
1
Where does NTFS store the label of a partition?
1
does files on ntfs have uid and gid?