For some reason, Windows Explorer has started cutting off everything after a dot (.) in my folder names. 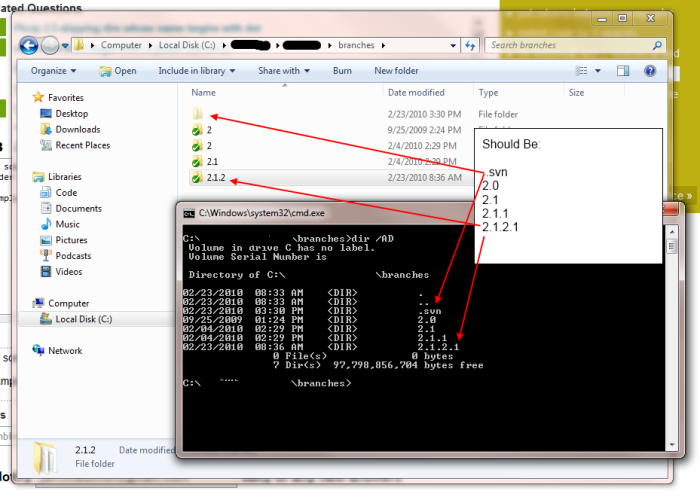 Any ideas? I do have TortoiseSVN installed, which provides the icon overlays, but that's never been an issue before.

Looks like the 'feature' to hide extensions. Check in the Folder-Options (you can find it in the Control Panel, and then the tabpage View) for it.

Edit: Oh, in that case sorry, this is the only discussion which I found whcih comes close to your problem.

OK, so following the link that Bobby posted, I found the solution. I had originally changed the default folder that the Windows Explorer taskbar icon opened to. So, instead of opening to:

I modified it to open directly into my C Drive:

After noticing that the folders were correctly named if I opened Computer from the start menu and navigated to the same directories, I changed the shortcut back to the original string and that seems to have fixed the problem.

I found a solution posted by Lee Diggins at Microsoft Community that fixes the problem. It is a Fix it tool from Microsoft.

One thing to note is that if you have some customisations you wish to remain, for example customs icon for files/folder, be sure to choose the option of Detect problems and let me choose the fixes to apply instead so that you can choose which fixes are desired.

For me I only chose the fix for View and Customisation problem for a folder.

This corrected the problem for me.

I had changed the explorer target to open on My Computer with following argument:

Restoring the target to %windir%\explorer.exe corrects the problem, without having to restart windows. And after having launched Explorer at least once, I can reset the target to the modified path.

I fixed the problem by unpinning Explorer from the task bar, opening a new Explorer window, navigating to my desired folder, and pinning again.

I don't know what originally triggered the problem (it had previously been okay) so I don't know if this solution will be permanent. The problem may have been related to Tortoise SVN (as the original question suggested), as I recently installed that, but none of the solutions offered here fixed the problem for me.

Not the answer you're looking for? Browse other questions tagged windows-7 windows-explorer or ask your own question.

6
Windows Explorer shows different third-party context menus in 32-bit mode on Vista 64
3
TortoiseSVN client slows Explorer to a crawl in Windows XP running in Parallels
11
TortoiseSVN overlay icons do not appear when installed by a different user account?
8
Windows Explorer crashes whenever I view a folder with an MP4 (H.264) video file in 'Large Icons' view (shows thumbnails)
1
How to show ALL files in Windows 7 Explorer?
0
Windows 7 - Searching within file names
3
Windows 10 Explorer navigation pane very slow to expand drive
1
Unable to unhide folder beginning with dot
0
How do I “find in folder”, except excluding “.hg” and “.git” dot-folders, in Windows file explorer?