What do the current, worst, and threshold SMART values mean?

I have a 2TB internal hard drive that might be failing. It spends several minutes at 100% usage when I first turn it on since I installed Windows 10, and yesterday it reported a corrupted Recycle Bin.

I downloaded CrystalDiskInfo, and the pertinent information is reproduced below: 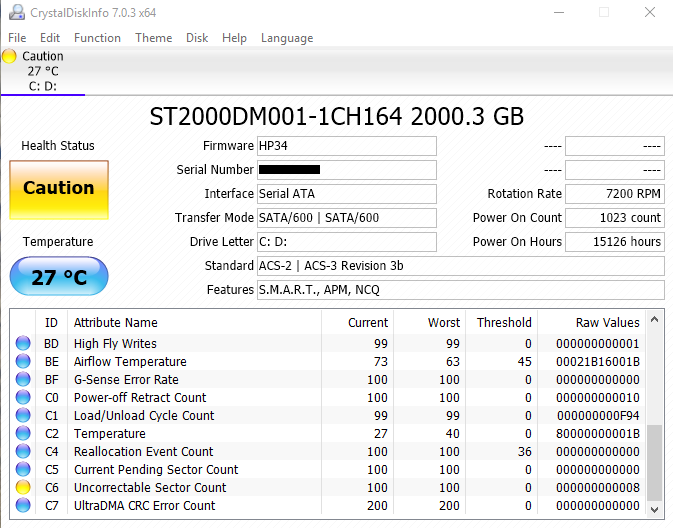 In short, the Uncorrectable Sector Count count is 100, and this is a "caution"-level problem on the drive. No other labels are "caution".

I'm not sure what to make of the Current, Worst, and Threshold values. I know that some of their actual values vary by manufacturer, and I've also read that if a current value is below a threshold, that statistic has failed.

The value of the Uncorrectable Sector Count is 100, which is also its worst-recorded value, and the stat has a threshold of zero. Additionally, various other stats read that 100 is both their current and worst while not being marked "caution".

Why is Uncorrectable Sector Count being displayed as caution if various other stats with the same value and threshold aren't? How can a lower-than-threshold value occur with a zero threshold? Is this a sign of imminent drive failure or is the tool merely miscalibrated?

EDIT: Seagate's SeaTools utility has reported that SMART is OK, but it didn't say anything else.

Why is Uncorrectable Sector Count being displayed as caution?

You need to look at the raw value (8) in this case. There have been 8 events.

The raw value of this attribute indicates the total number of uncorrectable errors when reading/writing a sector.

In this particular case, I would keep an eye on the value and if it continues to increase then replace the drive:

This is a critical parameter. Degradation of this parameter may indicate imminent drive failure. Urgent data backup and hardware replacement is recommended.

This is a critical parameter. Degradation of this parameter may indicate imminent drive failure. Urgent data backup and hardware replacement is recommended.

To clarify (since this is one of the top responses on Google for this question, but doesn't actually answer it very well, IMHO):

The "Current", "Worst", and "Threshold" values reported by S.M.A.R.T. are normalized qualitative values, that is they don't indicate the actual number of sectors, etc. Instead, they are intended to indicate "how good" or "how bad" that metric's value is on a scale.

With the "Current" and "Worst" numbers, higher is always better, and they are generally normalized to some common scale (such as 0-100). Unfortunately, one of the problems with S.M.A.R.T. is that many of these details are not specified in the standard, so what scale a particular manufacturer uses for these values is completely up to that manufacturer. Usually, most manufacturers seem to use 100 as the top (so the numbers are basically "percent"), but in some cases I've seen 200, or even 253, etc.

So if the scale the manufacturer has chosen is 0-100, then if a metric is reported with a "Current" value of 100 (100% healthy), that means the drive is telling you "It's perfectly OK, nothing to worry about here". If it reports less than that, then it's telling you there may be some cause for concern. What you want to pay attention to is how close these numbers are to the "Threshold" number. If "Current" falls below "Threshold", then that is the point at which the manufacturer considers the drive to be "failed" in some way (and can be sent back for warranty return, etc).

But just because the number hasn't fallen below the threshold doesn't necessarily mean that everything's peachy. It may mean that the drive hasn't failed yet, but it may in the near future. Generally, anything under 100 (particularly on certain metrics which have been shown to be indicators of possible future failure, such as "uncorrectable sector count") could indicate that there's something that you might want to be concerned about.

One of the other problems with these numbers, though, is that there's really no way to tell exactly how the drive firmware is deciding the "quality" of a particular situation. In the example given for the "uncorrectable sector count", the drive is actually reporting a "current" and "worst" value of 100 ("everything's fine!") but if we look at the raw value, it suggests there actually have been 8 uncorrectable sectors encountered. Is 8 sectors a problem? The drive doesn't seem to think so, but it doesn't tell us why. Do you think 8 sectors is a problem? Well, I personally think anything over zero for that metric is concerning, so...

This is why most people will say "just look at the raw value field", but there are two problems with this too: The first is that there's absolutely no standard for what the drive is supposed to return for that value, so you just sort of have to guess what it's reporting there. Quite commonly, for most metrics which involve "counts" of things, the raw value will be the actual raw count (keep in mind that raw values are usually shown in hex), so here it's pretty likely that it's reporting 8 total uncorrectable sectors which have been encountered in this case (which is why CrystalDiskInfo is flagging it as "caution"). The other problem with raw values is that often the drive has a lot more information about the situation that it can take into account than just that one value (for example, exactly when each uncorrectable sector was encountered, whether there have been an increasing number recently, etc), which just isn't reported to us. This may be part of the reason why the drive doesn't seem concerned by the 8 bad sectors (maybe they all happened a long time ago and it hasn't seen any since? But who knows..)

But in general, for a lot of this stuff, you just sorta have to make educated guesses. The 8 in the "raw value" field pretty likely means there have been 8 uncorrected sectors encountered (in the drive's lifetime). The "100" for current/worst says that the drive firmware actually isn't concerned about that and doesn't think it's really a problem ("100% fine"). That's really just a suggestion, though, so your own evaluation may differ.

As concerns your first question, the three columns together tell you the status of an attribute.

Column "current" means the current value. Usually it is at 100 when everything is ok. Higher values often mean that the attribute has never been updated (implies 100).

The column "worst" tells you what worst value SMART has ever assigned to this attribute.

"threshold" is the absolute health threshold and indicates the value at/below which SMART consideres the attribute a failure. Most attributes that have a zero threshold are not critical. When they decrease, it just means that you drive gets older. Other attributes have thresholds greater than 0 and are often critical.

As concerns your second question, the uncorrectable sector count is an important attribute that very often indicates an imminent total failure. Watch this attribute very closely. If it increments too rapidly, it is better to look for a replacement drive. SMART is not always implemented honestly from what I've seen. 100% health with 8 uncorrectable sectors is such a case. Try to do a surface scan if you would like to save/check the drive, but before you do such an operation with high I/O load, make a backup.

Not the answer you're looking for? Browse other questions tagged hard-drive smart bad-sectors hard-drive-failure or ask your own question.

2
Can ATA error be safely ignored?
1
Interpretation of CrystalDiskInfo Output

3
What is wrong with my HDD?
0
Difference between S.M.A.R.T. error 0x05 (Reallocated sector) and 0xC6 (Uncorrectable sector)
0
SMART attributes have large values
0
SMART Current Status vs Data
3
Can I modify the SMART value of Raw Read Error Rate Worst Value to be greater than 1?
2
Why is a SMART attributing failing even though the normalized value is still 100?
1
Do SMART values have any sense at all?
1
SMART: Is my HDD about to get bad sectors and corrupted data?
0
Hard Disk SMART returning high values after being wiped