My issue is the same as in this question, but none of the answers there helped solving my problem, so I'm hoping to get alternative suggestions here.

My laptop (Acer Aspire S5-391 with Windows 10 Home 64 bit) makes an annoying beep sound whenever I plug or unplug the charger, which I'd like to disable.

The following solutions I found in the linked question and in other places did not work for me:

Gloabally disabling sounds mutes the beep, but is not a desired workaround for me - I only want to get rid of the charger beep, but still want to hear other default system sounds (or at least some, I alreay configured these in the control panel, but didn't find an option specifically for the charger beep; I think this is a matter of driver or BIOS settings rather than default Windows settings, but am not completely sure).

My laptop makes an annoying beep sound whenever I plug or unplug the charger.

Beep should be permanently disabled.

Beep should be permanently disabled. 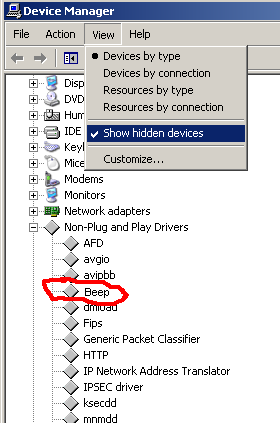 I'm currently using Acer Aspire 5. Everything is working fine. Audio and mic are OK. Except for the annoying beep when I plug in/unplug the charger.

So here is the fix that I found that just gets rid of the annoying beep. (The audio and mic still work.)

I would suggest you to follow the steps and check if it helps.

Disable the PC Speakers and check if it helps.

Not the answer you're looking for? Browse other questions tagged windows-10 laptop charger system-sounds or ask your own question.

9
How can I disable the beep when I plug in/unplug my laptop's AC adapter?

8
Laptop charger dying after plugging in?
1
How to use default Windows driver for sound card? - Windows 10 auto-update
1
constant high frequency beep when headphones are plugged into headphone jack?
0
Headphones “not plugged in” according to Windows
1
Laptop speakers not working in WIndows 10
1
Realtek Audio Drivers not working. Denied Access by Windows. How do I grant permissions back?
0
Windows 10 - No headphone recognized/showed when plugged in
0
Sending audio signal to both front and back jack panels, Win10
1
I have no sound on my laptop--Windows 10. Tough issue