On a windows PC I'd like to be able to find an approach to see incoming data on a serial port, as it comes in (i.e. rather than logging to a file and then converting and viewing the file after the fact).

I have been using PuTTY with a font (Compendium Arcana) that displays characters as hex values, but values that equate to ASCII non-printing hex values do not show (e.g. space still shows as a space, and ASCII SOH [0x01h] does not display at all)

Is it possible to make PuTTY, or any other terminal emulator, display these characters as they arrive?

Hercules setup can do this. If you ignore all of the product specific odds and ends it's a very flexible generic serial & network terminal program.

Right click in the main display window and select special chars->hexadecimal. All non printing characters will show up as {HEX value}

Termite is a small, portable and basic application that has a hexadecimal view plugin (they call it a filter)(available on the same page). The plugin allows one to send and receive hexadecimal values very easily and with no more setup required than entering the ports serial settings (eg. baud, flow control, etc) 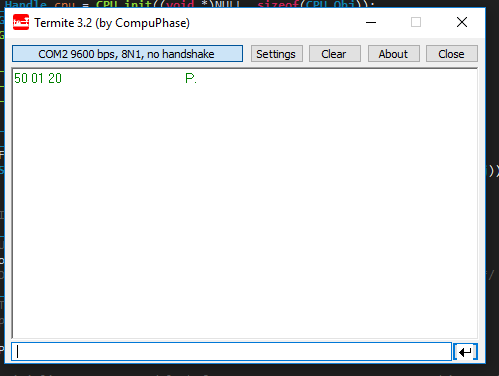 Not the answer you're looking for? Browse other questions tagged putty serial terminal-emulator or ask your own question.