How do I debug an emoticon-based URL?

I came across this URL (NSFW) and need to convert this to puny code.

As an experiment, I'll paste this URL here, but not sure if this will save.

How can I convert this URL to a standard DNS name so I can whois the IP space?

In this case, the domain is "🍕💩.ws" (xn--vi8hiv.ws). This is a free link "shortener" that can turn any link into emojis. It's free and available at http://linkmoji.parseapp.com

In this case, the translation punycode as Steffen mentioned won't help you, because you just get the domain/ips of this free service.

You need to check the redirects using e.g. curl or your browser's developer tools.

In Chrome's developer tools, it could look like this: 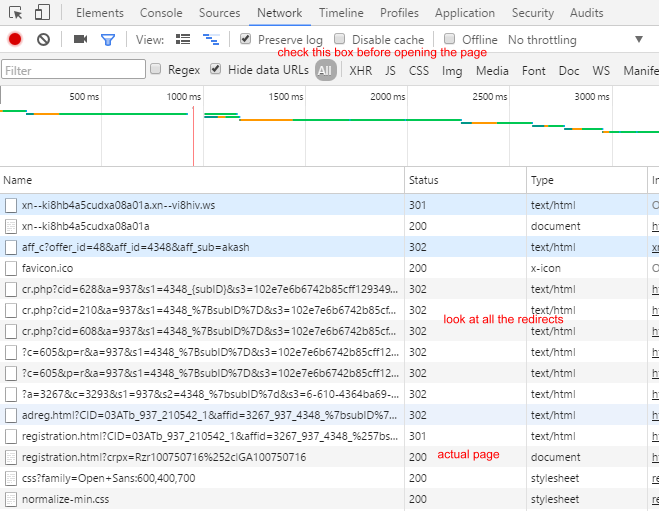 This is a two-step process, which involved a bit of trial and error in finding the right URL un-shorteners.

First of all, I tried a bunch of URL-unshorteners on the emoji-URL, until I found one that worked.

Unfortunately, I wasn't able to feed that back to itself; it looped back to that same URL.

But Unshorten.it, which choked on the emoji, could handle this URL perfectly well and told me it pointed to

The description it found for that site contains some words that are NSFW, so I won't repeat it here, but it's obviously spam to say the least, and possibly dodgy in other ways as well.

You need to convert it to punycode which is the ASCII representation of the name. This can be done for example online at punycoder.com and many programming languages have the necessary libraries if you want to convert it inside a program.

This is amazing! I had no idea you can use emojis in a URL, even though I'm a web developer! The other answer are great, but I found Unfurlr to work well. It allows you to see where something goes, without setting cookies in your browser, and without exposing you to a virus or drive-by-download as you would if you view it in your browser. It also shows you headers and scripts and contents if you need to safely inspect it more closely.

Just past the URL in the address bar of Firefox browser, it will show you the ASCII form automatically:

I'd expect other modern browsers to have similar behaviour, but I didn't actually test those.

Not the answer you're looking for? Browse other questions tagged dns phishing url unicode or ask your own question.

1
How is http://d§.cc/ a valid URL?
2
How do these characters (%25u, %25U) in a URL, pose a security risk?
1
How can a single URL redirect to different websites/servers? (ex: https://hkps.pool.sks-keyservers.net/)
33
How to prevent URL redirects in Chrome?
4
Whois database cannot find the entry?
0
Forward GoDaddy URL to Google Sites
2
What does ping -n do differently?
0
How can I check if traffic to a URL is allowed by the proxy?
0
How can I best go about approaching this issue of extracting URL links from an RSS feed?
0
Send DNS traffic for a domain to different IP addresses based on port