I'm making a document in Visio where I'd like to insert a picture of a person, but masked so that it is within an oval. I could edit each picture outside of Visio to be an oval, but I'd rather not do that. Basically the only option I've found online is this guy's: http://www.visguy.com/2007/07/29/masking-images-in-visio/

Where he describes making your image a custom pattern and filling a shape with that pattern. That's...bad. I'd rather not have to do that for every image.

There does seem to be some way to do it, though, because if you open the Organizational Chart, there's an option for a "Coin": 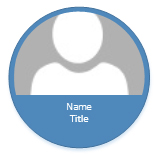 There are a few problems with this, though - every available coin has text in it, and has protections so you can't remove it. I've attempted to mess with the protections or edit the master, but it won't let me. Also, you can't move the image around within that cut-off circular frame - instead, it fills the frame with the image and that's it.

Is there any way in Visio to draw a shape, fill that shape with an image, then resize that image to fit well within the mask? If the functionality for this doesn't exist, then Visio simply isn't the tool for me, which is fine. But it does make the diagrams pretty easy.

If your shapes don't have to be right next to each other, what about creating a knock-out of an oval in a larger background colored square (turn on developer tab in File>options>advanced>general, create both shapes, set fill to white, line to none, enter align H&V, developer > shape design > operations:combine)? Paste your picture over the square and "send to back" and only the oval picture remains. Group the picture and the shape so they move together.

To minimize the extra work for future projects, use the custom connector tool to add connectors to the knocked-out middle instead of the edges and save the shape as a stencil then when you want a new one, drag it onto the page.

I have found the answer! In the shape sheet, in the Foreign Image Info section, set "ClippingPath" to be "GeometryX.Path" where "X" is the number of the geometry section you wish to clip by. So, if you have a shape with just one geometry section, just set it to "Geometry1.Path" and you'll have a cropped image (this is what the Coin icon does to crop its image). This assumes that you already have the geometry of the clipping path present in one of the shape's geometry sections, which it won't by default when you insert the image onto the page.

If your shape is made up of more than one geometry section and you want to clip the image to bounds made up from the multiple sections, make a new geometry section that describes your desired clipping path and set its "NoShow" setting to "True".

If you just need to get a masked image into Visio (without needing to make it configurable by a theme or similar Visio feature), creating the item in Microsoft Word, PowerPoint, or Excel and then pasting into Visio is straightforward:

Not the answer you're looking for? Browse other questions tagged microsoft-visio-2013 or ask your own question.