How to change default path in cmder

I have Cmder for Windows it has default path c:\Users\ username and I want to change it to any other path I like or want. How do I change it ?

Also cmder can replace cmd.exe meaning is it possible to set cmder as default program insted of cmd.exe 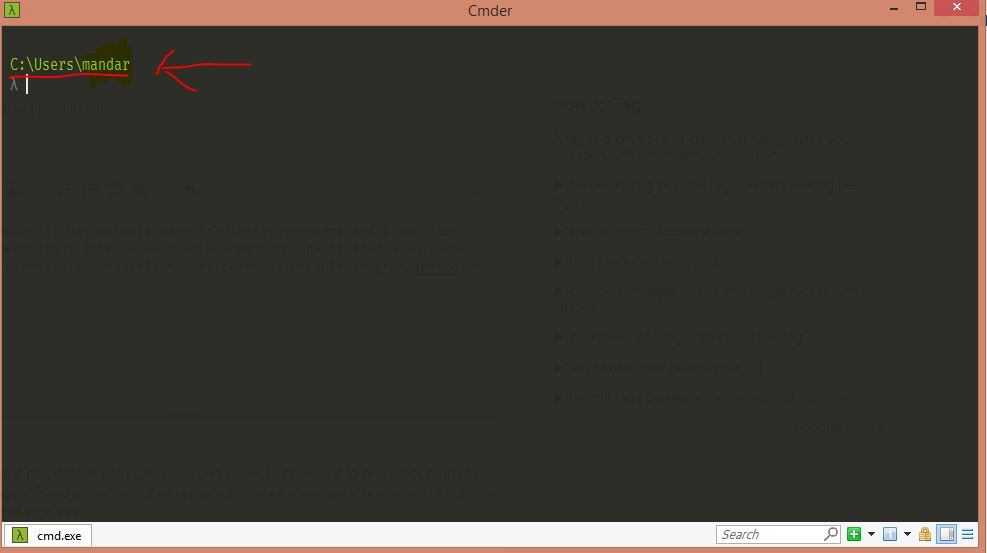 For those who none of the above solutions worked (Cmder keeps reverting back to old path), here's what I did to fix it:

For me, the issue was in ConEmu.xml which was preventing startup folder changes.

In cmder\vendor\init.bat there are these lines:

So to change your default path for cmd.exe all you need to do is to edit your cmder\config\user_profile.cmd file and add something like this at its end:

I'd recommend using a specific environment variable like %CMDER_HOME% because if you use the same cmder config on multiple hosts, you can set this environment variable to the appropriate directory on each host and use cmder with the exact same configuration. cmder provides a default value for %HOME%, as you can see above, so that seems to be a safe failback value (you get the same behaviour without that line too, but that's probably because the cd failed; which feels nicer to be avoided).

Also cmder can replace cmd.exe meaning is it possible to set cmder as default program insted of cmd.exe

I'm not sure what you mean by this. cmder is just a console emulator that nicely integrates other terminal emulators into its windows. One of these terminal emulators is cmd.exe. So cmder's purpose isn't really to replace cmd.exe, although most certainly you can just create a new tab in cmder whenever you would otherwise spin up a new cmd window. It would be probably useful to know where and why you'd like to use cmder by default instead of cmd?

Not the answer you're looking for? Browse other questions tagged windows-10 command-line windows-8.1 cmder or ask your own question.

10
How to create Cmder shortcut to start a task
0
No git branching information in cmder
1
How can I change default path to Sublime Text preferences?
12
How do I update Cmder to use PowerShell Core?
3
Start cmder with taskfile and 2 terminals open in split screen
1
How to setup integrated terminal of vs code with Cmder and bash as default
1
How do I change directory to a path containing spaces in cmder on Windows 10?