I have a relatively old PC that runs on an ASUS 5PK SE/EPU motherboard with a Radeon HD 4870 graphics card, one SSD and one hard drive.

My problem is that the processor is always at 50% usage. Here's a screenshot from Process Explorer: 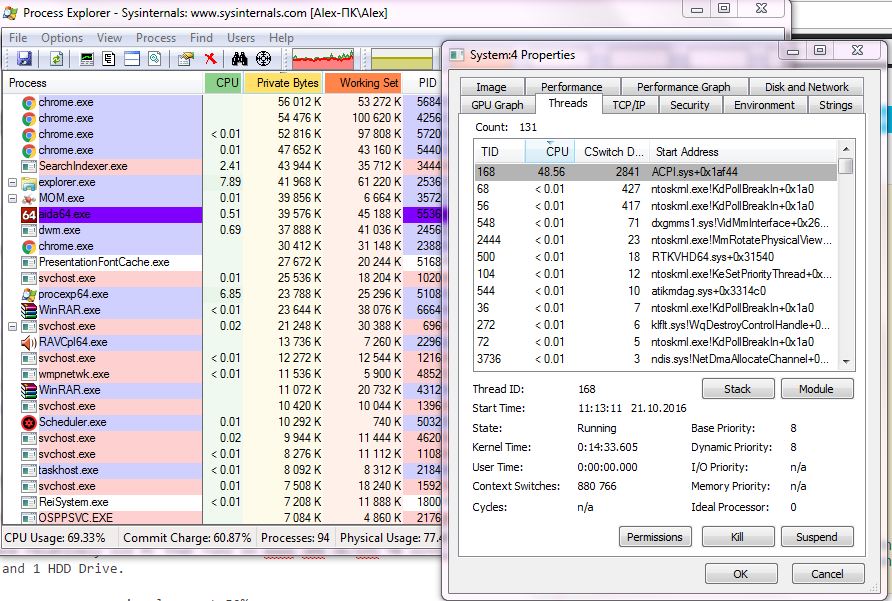 From the screenshot I see that the problem is in ACPI.sys+0x1af44.

How can I find out what exactly is behind 0x1af44? Which device or driver?

I found another answer where someone says they had a Family Ethernet Controller behind ACPI.sys+0x1af44. In my case I have Atheros L1 Gigabit Ethernet. I've disabled it from the BIOS but it didn't have any effect.

UPDATE: I have placed an older system onto my HDD, disconnected the SSD and booted. There is no issue. Is it possibly related to a driver then, or the SSD? However my SSD is relatively new.

UPDATE: I have selected to boot with the HDD and also had the SSD running. There is no issue when I run an old copy of Windows on my HDD.

It has to be something with the drivers. I've updated everything using Driver Booster.

Please keep in mind I use a PC, not a laptop.

Right-click Parameters, point to New, and then click DWORD value 100 .

If you are 100% sure its not a hardware issue - then you need to remove all drivers from device manager. Make sure you have all drivers from Microsoft (Year 2006). So I did that with LAN/SOUND card disabled from BIOS and...I still had an issue with ACPI.sys. I booted into safe mode w/o LAN drivers. Same thing. Then I just enabled my network card from BIOS and here we go. Everything went back to normal and my CPU is at 1-3%. I can't really tell which driver caused this problem.

So the solution is - wipe out all drivers manually. Reboot as many times as needed.

Also, don't rely on Driver Booster or any similar software. Sometimes they cause more harm then good.

Not the answer you're looking for? Browse other questions tagged windows-7 drivers cpu or ask your own question.

6
Why is the System process using 40-60% of CPU power all the time?
1
Graphics card in laptop not working
8
High CPU usage by “System” and “System interrupts” (caused by ACPI.sys)
1
ACPI.sys high CPU usage