Why aren't there multiple heads covering the radius of a hard disk platter?

If every platter had multiple heads that together cover the radius, wouldn't that mean the arm didn't have to move and that data would transfer faster?

Why is the following system: 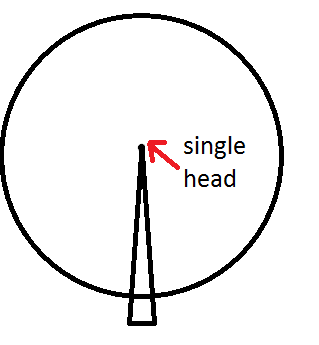 used instead of this? 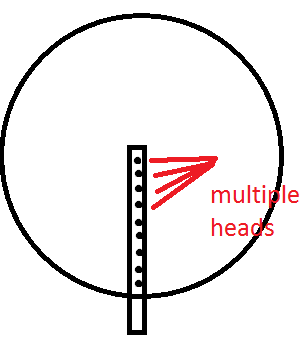 From The PC Guide, Single vs. Multiple Actuators, circa 2001:

One common question that folks studying hard drives often have is something like the following: "If the mechanical motion of the heads across the surface of the hard disk platters is so slow--relative to other components in the hard drive and the rest of the computer--why don't the hard disk manufacturers just make hard disks with more than one actuator?" It's a very good question. Putting a second set of heads in the drive would allow two areas of the disk to be accessed simultaneously, greatly improving performance, particularly on random seeks. Sounds great... in fact, why not put four actuators and sets of heads on the drive, while we're at it? :^)

In fact, such hard disks have been built. Conner Peripherals, which was an innovator in the hard disk field in the late 1980s and early 1990s (they later went bankrupt and their product line and technology were purchased by Seagate) had a drive model called the Chinook that had two complete head-actuator assemblies: two sets of heads, sliders and arms and two actuators. They also duplicated the control circuitry to allow them to run independently. For its time, this drive was a great performer. But the drive never gained wide acceptance, and the design was dropped. Nobody to my knowledge has tried to repeat the experiment in the last several years.

There are several reasons why it is not practical to make a drive with more than one actuator. Some are technical; for starters, it is very difficult to engineer. Having multiple arms moving around on a platter makes the design complex, especially in small form factors. There are more issues related to thermal expansion and contraction. The heat generated inside the hard drive is increased. The logic required to coordinate and optimize the seeks going on with the two sets of heads requires a great deal of work. And with hard disk designs and materials changing so quickly, this work would have to be re-done fairly often.

However, the biggest reasons why multiple actuators designs aren't practical are related to marketing. The added expense in writing specialty electronics and duplicating most of the internal control components in the drive would make it very expensive, and most people just don't care enough about performance to pay the difference. Hard disks are complex technology that can only be manufactured economically if they are mass-produced, and the market for those who would appreciate the extra actuators isn't large enough to amortize the development costs inherent in these fancy designs. It makes more sense instead to standardize on mass-produced drives with a single actuator stack, and build RAID arrays from these for those who need the added performance. Compare a single 36 GB drive to an array of four 9 GB drives: in effect, the array is a 36 GB drive with four sets of everything. It would in most cases yield performance and reliability superior to a single 36 GB drive with four actuators, and can be made from standard components without special engineering.

Actually only one read/write head can be attached to the end of the arm. This is to achieve the proper "flying head" air gap between the platter and head. So additional heads cannot be mounted on that same arm (and also maintain a proper air gap).

I recall seeing a HDD with a dual arm assembly. There was only one actuator that moved both arms so that each R/W head covered half the platter (either the inner cylinders or the outer cylinders). This is a hardware solution to the short-stroke approach of reducing seek time.

There have been head-per-track (aka fixed-head) hard-disk drives. They are uncommon and expensive.
I used a single-platter fixed-head HDD manufactured by General Instruments on a project long ago.
Since there is only one host interface to transfer data, only one R/W head can be active at any time.

... the data would transfer faster isn't it ?

Only the seek time would be reduced to zero.
That would reduce the total access time, but there still is the rotational latency and the time to read the data off the platter, validate the sector, and transfer the data to the host.
See this answer about disk reads.

There have also been dual-port drives; the drive would have two read/write head assemblies and two host interfaces. Simultaneous operation was possible, but the hosts computers were responsible for handling mutual exclusion issues.

Perhaps people hadn't think of that. Maybe it might stress the HDD. Too much magnetic can damage the hard drive component.

13
Multiple independent read/write heads on the same hard drive platter?
11
When a disk read or disk write occurs, where does the data go?

13
Multiple independent read/write heads on the same hard drive platter?
16
Does multi-platter hard-drive use all of their heads to read simultaneously?
0
Why aren't all the disks contents in virtual memory?
6
How do heads find the data stored on a hard disk drive?
3
when buying a new HDD, which is better RELIABILITY, having 4 heads or 6 heads?
0
After performing a platter swap (hard drive repair) it seems like the issue isn't with the PCB or head or mechanics but with the platter itself?
14
How do HDDs maintain flying height (head-platter distance)?
26
Why are optical disc drives slower than hard disk drives?