Protect powershell script from being opened, edited or modifed in Windows

Output when running the script through powershell: 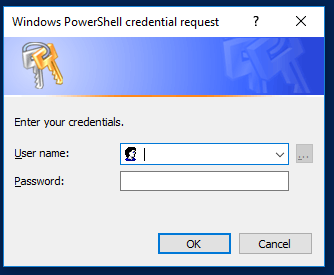 I wanted to make this myscript.ps1 protected so no one can edit it and see the username and password

I assume you don't really care about people actually editing/changing the script, but only want to keep the password secure. As Ben said, transforming it into an exe really doesn't do much to prevent extraction because you are still embedding the password in it.

What you really want is a password hash, which is a one-way function that transforms a password into a hash you can embed. Given only the hash, an attacker cannot reverse the process, but you can verify a password attempt by hashing the entered password and comparing it with the known hash of the correct password.

Where $authorisedHash is the precalculated result of (pseudocode) Get-Hash that you store for later comparison.

Ideally, you'd use an algorithm such as Bcrypt or PBKDF2, with a high work factor (i.e. slow it down) so brute force attacks (guessing by trying every possible password) take too long to be feasible.

By this method, the only string you ever store in your code is the original output of whichever "Get-Hash" (pseudocode) function you happen to use, which makes it very difficult if not impossible to get the original password out of your source code.

However, while this keeps the password secret, it really doesn't offer any security advantage. As Ben said, there's really nothing stopping the user from manually running the Copy-Item, or even just copying the file themselves with Windows Explorer.

For this kind of security, you'd need to use Windows' Access Control Lists and a separate user account that's actually authenticated elsewhere (e.g. via Windows OS login/runas commands). You need an external service or account to perform the copy, because you need to make sure the user doesn't have direct access to bypass the script.

Now, this could be done via PowerShell, but there are other, easier, ways. An easy generic method is to store the file within an encrypted archive, such as ZIP1, RAR, 7z, etc., where the user must provide the password to extract. Alternatively, PDFs themselves include support for encryption, requiring a password before they can be read.

1 Note that Windows' built-in crypto support for ZIP in XP to 7, possibly 8 and 10, does not support AES. It only supports the insecure legacy ZIP encryption. So you'll need third-party tools to extract, or a self-extracting archive (exe).

If a user can execute a script, they can read its contents. (You can only execute a script if you know what is says, otherwise you wouldn't know what to run.) Therefore, it is not possible to have a user simultaneously able to use your script and unable to read the password out of it. You could include the password as a cryptographic hash, but if that script runs as a normal user, the user could just bypass the script and copy test1.pdf to the destination without running your script at all.

Instead, you should apply file access controls to the destination files/folders to require the privileged operation run as an authenticated user. Then, you could supply the user-provided credential as Start-Job's -Credential parameter.

0
How to set environment variables only in the SYSTEM account