I have Windows 10 installed on a SSD drive and want to install Linux Mint on another HDD drive.

Anyway, I don't know if my PC is UEFI (some parts are old, others recent, like the SSD) but I don't think so. Here are my partition.

How can I do that without screwing up my boot to windows which I need... you know... for steam ;) ? 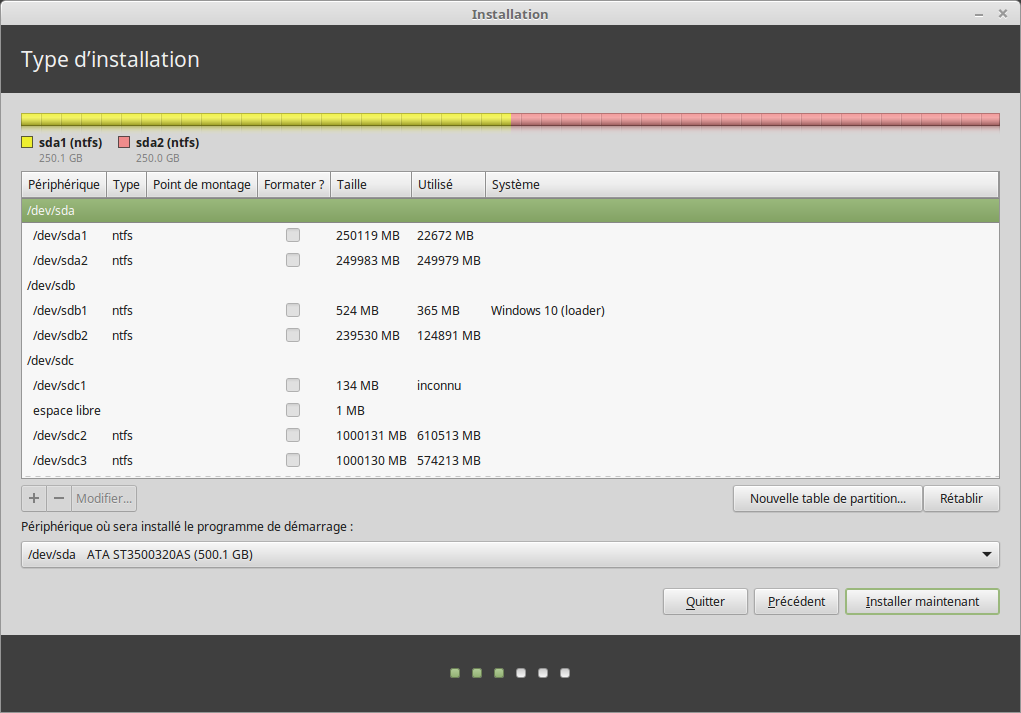 I'm wondering if I need a /boot partition, since there's a Windows 10 loader (sdb1)? And if I can test without it…

Plus, in my BIOS, it's written ASUS EFI BIOS, is it UEFI or BIOS then?

The safest approach to installing Linux in a way that won't disrupt Windows is to use virtualization -- VirtualBox, VMWare, etc. Such tools let you run Linux within Windows (or vice-versa), so you needn't repartition your hard disk or mess with the delicate boot process. You'll also be able to run both OSes simultaneously, so you can do something in Linux at the same time you're doing something else in Windows. The drawback to virtualization is that you'll sacrifice some performance; the virtualized OS won't get full access to the hardware and so will perform more slowly than it would if it were installed natively.

If you decide that virtualization is not for you, it looks to me as if your Windows is installed in BIOS/CSM/legacy mode. I say this because there doesn't seem to be an EFI System Partition (ESP) in the partitions you've shown, and an ESP is more-or-less required for booting an EFI-based computer. To be 100% sure, though, see the instructions on this page of mine for identifying your Windows boot mode.

You say that you want to install Linux in /dev/sda1. Be aware that, aside from virtualization and one or two other exotic installation methods, Linux completely takes over any partition(s) you give it. Thus, if you install Linux to /dev/sda1, any data on that partition will be lost. If that's fine, you can proceed; but if not, you should re-think your plans or move your data elsewhere. If you want the three partitions you mentioned, your /dev/sda1 will be replaced with three or four new ones, depending on how you partition the disk. (Personally, I'd replace /dev/sda1 with an extended partition and then create root (/), /home, and swap as logical partitions -- /dev/sda5, /dev/sda6, and /dev/sda7 in Linux's nomenclature. There are other ways to do this, though.)

As to the nitty-gritty details of installation, there are numerous tutorials on this subject. Try Googling "install Linux Mint," read a few pages (or watch videos, for video instructions), and if you have any questions, ask the authors or post your specific questions here or on the Linux Mint forums.

There are ways upon ways to determine if your Windows was installed in UEFI or "Legacy" mode. I'll just share this link http://www.eightforums.com/tutorials/29504-bios-mode-see-if-windows-boot-uefi-legacy-mode.html with you, so you should be able to determine it for Windows. If it is not installed in UEFI mode, the following might not be valid for you!

For nice partitioning you may use the scheme presented in http://www.linuxtechi.com/linux-mint-18-installation-guide-with-screenshots/ . Some additional infos:

Now to your special case for /boot and /boot/efi:

You can create a second seperate EFI partition for your Linux, but you don't have to. If you don't want to, because you want to use the one from Windows, you may use the drop down menu, which can be seen in your screenshot, to choose the drive where the bootloader should be installed. (I hope I'm not remembering the menu incorrectly. Unfortunately I can not read French.) You would choose /dev/sdb1 then.

When I was installing Linux Mint as a dual boot next to (UEFI) Windows 10 but on a seperate drive, the Mint installer always used the already present ESP/EFI partition that the Windows installer had created. Even a newly created EFI partition on a seperate drive exclusively for Linux was ignored. I still don't know why. Fortunately the current Linux Mint installer didn't break my Windows boot. (Also I could manually move the necessary files to the second EFI partition and everything works like charm now.)

What should happen is, that from then on instead of booting the Windows bootloader, a GRUB instance will load, giving you the possibility to boot Linux or Windows just as you wish. The GRUB and Linux loader will be added to the existing EFI partition.

In your screenshot the entry for /dev/sdb1 is slightly strange, because usually a FAT variant (most common is FAT32) is used for the EFI-partition. So if /dev/sdb1 indeed is your EFI partition, Linux might not accept it. Instead it might create a seperate EFI partition on the drive you define in the drop down menu at the bottom. I can't tell the outcome as I have not yet encountered an NTFS formatted EFI partition. This might break your Windows boot temporarily, as the newly installed GRUB might then be unable to find your Windows bootloader. It should be possible to repair this afterwards though.

After you have the two partitions settled in, I recommend using rEFInd for booting the OS of your choice. I found it much nicer to handle than GRUB.

Not the answer you're looking for? Browse other questions tagged linux-mint windows multi-boot uefi bios or ask your own question.