I have a very weird problem. I recently discoverd a blue dot on every dark/black image i opened. A dead pixel? It couldn't be, a dead pixel does not receive any energy and would be a black pixel on all colors.

So it has to be a stuck or hot pixel. So i started playing around in Paint. And here is where the weird part begins.

But that's not all. 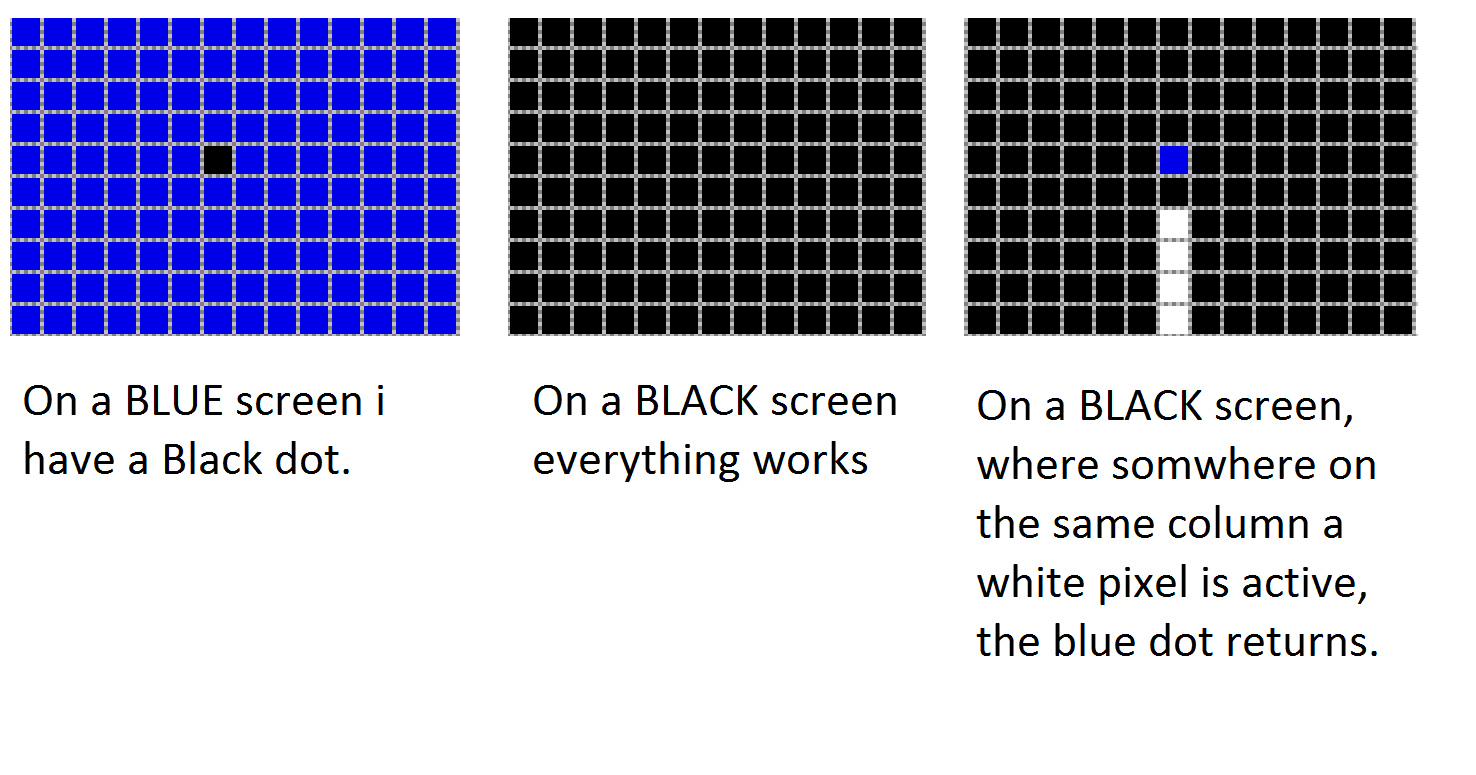 So i started playing with WHITE on the same column, conclusion:

How can i fix this?

Also its a new notebook, 9 months old (lenovo y700-15isk). Manufacturers also have defect pixel policies, where they can decline the repair or replacement request when the defective pixels doesn't meet the specific amount of defect pixels. ( its 3 defect pixels for Lenovo if im not wrong)

What is the problem im dealing with? how can i fix this pixel? Is it software related? A driver problem? Its not a dead pixels because it shows blue, its not a stuck/hot pixel because it doens't stay blue, so what is it?

The Pixel is a hardware fault with some kind of stuck (not dead) pixel features.

There are not as many quirks to your problem as you think. Several of the observations you've listed could be occurring because the pixel doesn't really change, and so you're always viewing it in terms of its relative colour compared to the pixels around it.

Did you know that there's no such thing as black ink? Most often people use very dark blues, but occasionally other colours depending on the situation. Black tattoos fade through blue or red or green - never gray, and chromatography of black inks always reveals an underlying colour.

You sometimes see a black pixel on blue screens because you're seeing the same dark blue relative to lighter blues, and so it looks black.

LCD screens can be weird

I know very little about the nuts-and-bolts behind LCD screens, but it's not as simple as having your little colour-guns which drove CRT displays in years past, which could be confusing your approach to this. LCD crystals usually re-orient in layers to 'gate' through a certain amount of red, of green, and of blue from the underlying light source. It seems plausible that you've got a mis-calibrated pixel somewhere in there which is typically letting more blue through than it ought to.

It could be that (as you suggest) the pixel's set up in reverse, where the crystal's blue-filter opens up the more you tell it to close, and vice versa. I suspect we'd need to understand more about the exact triggers which control the way your hardware and software interact before we'd really be able to get to the bottom of it, but that's my two cents.

0
What kind of pixel defection is this? Can it be fixed?