I also referenced this dated post: Dell laptop... This is for a Windows 10 Dell Precision Workstation. It has operated without issue for several years.

Thought I would ask in the event others have seen this in different ways since the post linked above was created.

My PC changed from Extended Display to Duplicate Display un-commanded. After that happened Device Manager showed 4 'Generic Non-PnP Monitors' and 1 'Generic PnP Monitor'. These manifest as shown below: 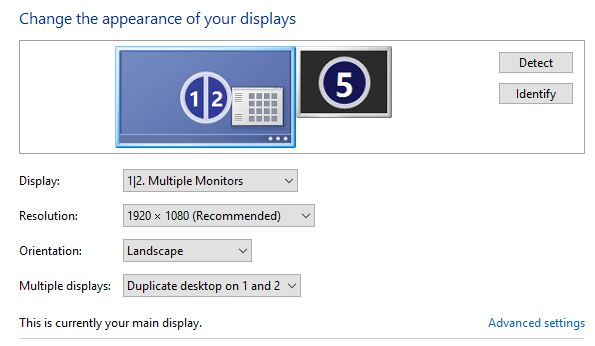 As I was trying to solve this yesterday, the system kept adding more of the 'Black' display icons to the Control Panel applet until I got up to 7 displays. I actually only have the laptop LCD and 2 external monitors.

When all else failed to resolve the issue (after consulting with the contracted tech support) I performed an image rollback to the previous day and the problem resolved, but only temporarily. This morning it did another un-commanded change to Duplicate Display mode and added the generic monitors back in. As soon as I switched back to Extended Display mode the following showed in the applet: 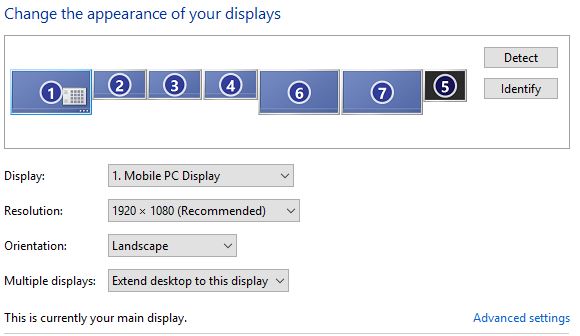 In addition to any suggestions, I'd like to ask if anyone can concur or rebut the following:

Since I reloaded the image and it was initially OK, then did the un-commanded display mode change, I draw the conclusion this is not an OS problem, but rather a hardware issue.

I'm certain the 2 responses by Mr_Moneybags and solomon219 are legitimate solutions for those situations and should be useful for those in similar contexts. That last post reminded me that I should post what eventually solved my problem.

After that, the extra monitors immediately disappeared and have not returned and the Device Manager display was corrected as well.

I had the same problem :( Seems to be a bug in the latest Intel Driver. For me the solution was downgrading the driver one version so it still was officially supported by Windows 10, but also still had an Intel Driver installed.

I've just fixed the issue a second time via a different route. In Device Manager, under Display adapters, there were two listed: AMD FirePro M6100 and Intel(R) HD Graphics 4600. Disabling the Intel adapter immediately removed the extra phantom monitors. I shut down the system, docked it, powered it on, and the two external monitors picked up the signal right away.

19
Force native resolution to Non-PnP monitor in Windows
3
Dell laptop keeps detecting a Virtual Generic Non-PnP Display Device
1
Web pages (CSS) looks different when page is dragged from one monitor to another in a Multi-monitor configuration
0
I'm having trouble getting my computer to save (multi) display settings
13
External Monitor shows "1|6" and my laptop display is "5" – what is this?
1
Daisychaining 2 DisplayPort 1.2 monitors causes both to turn off
0
2nd display not working on Windows 10 laptop