I have 3 input languages installed and it is very annoying to change them with standard Windows keys because I am often overflow the language.

But I don't see it is possible.

Also, probably better behavior would be like Alt-Tab behavior.

Is it possible to improve?

I know how to set change shortcuts in Windows, the problem is that options are very poor: 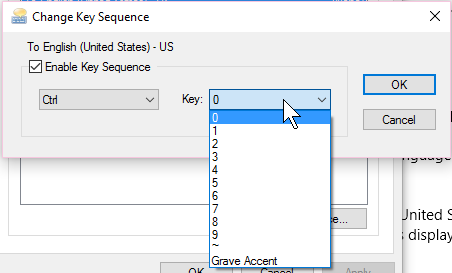 Most of these combinations are used in many popular programs like Google Chrome, so they are unusable.

And in switch choice: 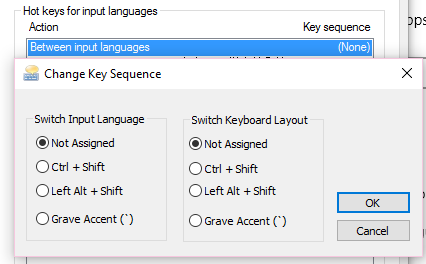 there is no way to disable cycling and palette is very poor. Actually I can choose between Ctrl-Shift and Alt-Shift.

I emphasize: the entire setting of language switch is nearly unusable in Windows. Most of options are conflicting with other programs and overall functionality is extremely poor.

So the question persists: how to set my own combination, not limited to this strange choice by MS? Or how to do something what I described in question?

You could set the shortcuts using these poor options that are found in Windows, then map them to your own additional shortcuts.

The tool for that is AutoHotkey, that can map keys, but can also invoke general-purpose scripts that can do much more than mapping. AutoHotkey can do all that you asked for.

There is extensive help to be found on the Web for writing AutoHotkey scripts, but I can also give hints if you wish.

AutoHotkey scripts are stored in files with the .ahk suffix. If you wish to have the script run when Windows is started, put it in the Startup folder, for example a file named C:\ProgramData\Microsoft\Windows\Start Menu\Programs\StartUp\AutoHotkey startup.ahk.

Remark: I would in general counsel to not to map Ctrl+Shift, since this disables some useful shortcuts. For example, in many applications the select-word-to-left shortcut is Ctrl+Shift+Left-arrow.

Not the answer you're looking for? Browse other questions tagged windows windows-10 keyboard-shortcuts input-languages ime or ask your own question.

140
How to disable Ctrl+Shift keyboard layout switch (for the same input language) in Windows?
18
Why does Windows 7 always automatically change the input or keyboard language?
10
Hotkey to switch input language in Windows 7
1
Why does alt+shift change language for all applications in Windows 8?
1
Windows (10) - switch between languages with CTRL SHIFT
0
windows 7 domain computer unable to change keyboard input method
8
Disable Windows 10 language popup