How to get Chrome favicons to appear in Windows 10 start menu?

I use Chrome's More tools > Add to desktop... feature a lot to pin webapp shortcuts to my desktop and taskbar and have them open in a separate chromeless window.

This works great, but when I pin the shortcut to the start menu, I get Chrome's default icon instead of the favicon.

The favicon is displayed fine on the desktop shortcut and on the task bar.

How do I get the favicon to appear on the start menu, too?

It looks like this issue is caused by a quirk in the standard way Windows 10 picks an icon for a tile. I found the following explanation by "Leo Vr" on the Chrome Help Forum:

The big Google-"icon" on the start-menu and the fact that for Google-apps all "icons" are the same are not caused by a fault, but are "according to spec". With the Windows 10 Threshold 2 update, Microsoft added the possibility to customize the tiles in the start menu a bit. Google uses this feature, which makes some of us unhappy.

When you add a program to the start menu, the following happens: - a shortcut for the program is made in the directory "....\AppData\Roaming\Microsoft\Windows\Start Menu\Programs". - a tile is made, based on this shortcut AND the before mentioned file "VisualElementsManifest.xml". This causes all shortcuts for the program "chrome.exe" to have the same big "icon".

What can we do about this?

This way I got the Google-apps icons to look the way I wanted. I hope it works for you as well.

"tfenster" in the same thread also provides this handy PowerShell script (which I had to modify slightly to get working) for updating all shortcuts in the Chrome Apps folder:

Here's an easier method that should work for most people:

I like Charles Roper's answer but it isn't helpful for those of us who don't have experience using the Windows Powershell.

Basically, you create a copy of chrome.exe, rename it to chrome2.exe and then point all of your start menu shortcuts to this new exe file.

Once you click Apply your icons will display correctly.

Here's a step by step:

Note that there's no need to create a new copy of chrome.exe for each shortcut; just the one chrome2.exe will do.

Alternately, create a .URL shortcut to a site. Move the file to C:\Users\{username}\AppData\Roaming\Microsoft\Windows\Start Menu\Programs 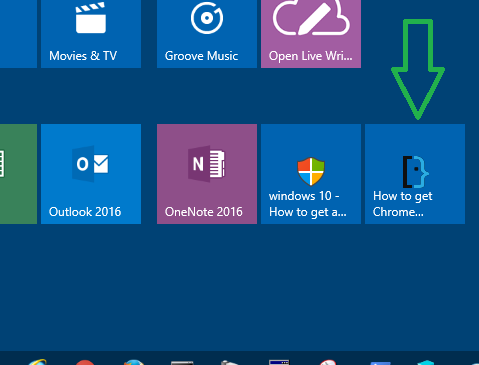 Found another nice way to customize the Startmenu Links with the Tool TileIconifier The Tool is Open-Source and works well in almost every Shortcuts except MS Office.

You can get it Here.

I tried many of these options, but the only one that worked for me was this solution by g33kio:

The reason the icons are wrong is because the shortcuts refers the chrome.exe with the options on the end to launch the app. The only way to fix this is for chrome to create bat files, or actual exe files to lauch the apps with the associated icons. There is a work around, but you have to do it for each app and it's not an easy process.

You need to get to the normal icons that are used for google Apps. You can do one of two things:

When you are changing the properties in step 15, set Run to Minimized, or it will flash a command prompt window when you open it.

Even easier answer that makes sense and works! Steps:

Not the answer you're looking for? Browse other questions tagged windows-10 google-chrome start-menu or ask your own question.

0
Can no longer open Chrome Apps from Windows 10 Startmenu