How to install OS X *.TTC font on Windows? Error: "*.TTC does not appear to be a valid font"

On my Mac is a font called "AmericanTypewriter.ttc". I'd like to use that font on my PC, for a specific creative project. I was able to copy the actual font file over to the PC, but when I try to install it into the Windows Fonts folder I get the following error message:

Can *.TTC format font files be installed on Windows? If so, how? Thanks!

UPDATE: I downloaded the source code for a simple ttc2ttf utility (ttc2ttf_AA.tar.gz) found at this Japanese page and compiled it under cygwin via g++. The resulting executable extracted a single file, "AmericanTypewriter.ttf", from the TTC / True Type Collection. (Why have a collection with only one file!?)

However, I still get an error message similar to the one above when I try to install the resulting AmericanTypewriter.ttf onto Windows. I'm stumped again.

p.s. I no longer need this font on Windows, but now I'm determined to figure out why & how-to :-)

Convert ttc to ttf with onlinefontconverter.com (developed by me), like: 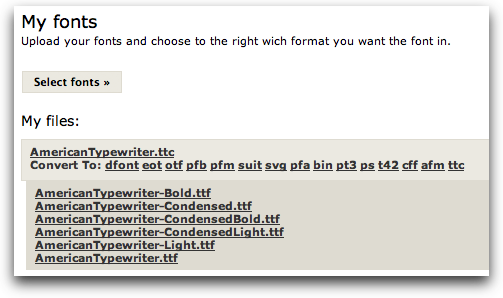 This information is based on information that I have gleemed from many different sources, including Adobe's support documents... So any corrections, and changes, are appreciated...

The full document is here... http://www.schollnick.net/wordpress/systems-administration/fonts/

But, What fonts can the Macintosh use?

What fonts can Windows use?

Please note, that Windows does not directly support TTC fonts, according to Adobe... So, you could probably use an Font manager to assist with the TTC.. But natively, Windows doesn't support TTC's...

Font Creator allows you to crack open the TTC archive, and extra specific fonts out of it. http://www.high-logic.com/fontcreator/manual/index.html?truetypecollection.html They do have a trial edition, but purchasing it would be $79...

I haven't been able to find a free converter at this point...

Copy the extracted Font to the Macintosh.... Double Click on the font, and font book should open giving you a preview of the font. Choose to install the font.

You should now have the full display of font book, listing all the fonts installed on the system. Find the font you installed, and choose File --> Validate font.

That will give you an report listing any issues with the font. And that report will be able to give you a starting point on what needs to be fixed, and/or if it even can be.

I guess you're just out of luck with this specific font (without converting it).

On a Mac, the font in /Library/Fonts/AmericanTypewriter.ttc is identified as:

Indeed, the first 4 bytes are the magic number for ttcf:

So, this surely is a file claiming to use Microsoft's TrueType Collection format. According to Wikipedia:

They were first available in Chinese, Japanese, and Korean versions of Windows, and supported for all regions in Windows 2000 and later.

And according to Apple:

Mac OS X also works with font formats used by Microsoft Windows. These fonts have all their data in the data fork and do not have the additional resources found in Macintosh fonts.

So: copying to Windows should not yield any data loss, as there is no hidden resource fork to forget. And hence, this should install fine on Windows...

A quick test using Microsoft's Font Validator tool on Windows XP does not show any errors. But a full test shows, among many rendering errors, some things I don't know how to interpret. Note that E2132 and E1607 might indicate the validation tool is outdated, possibly also causing some of the other errors:

So, if Microsoft's Font Validator is right, then I assume Apple did a bad job implementing the specifications. (And maybe even on purpose, to stop distribution of the font to Windows?)

I found http://transfonter.org/ttc-unpack and it worked. Unpacked a ttc file allowing me to download the 4 ttf files I was after.

I don't think you can. This page claims you can by simply copying it into the Windows Fonts folder:

Copy and paste the font file (fonts typically end with the extension .tty, .ttc or .fon) into the C:\WINDOWS\fonts folder.

However, I'm guessing that this doesn't refer to Mac TTC fonts, but True Type Collections. Mac TTC fonts will be stored in a format that Windows doesn't understand.

This page has a list of font converters including TTConverter that is:

I've just discovered that most of the links for that program are now broken, so are less than useless. You need to find something like this tool for doing the conversion.

If you install Dfont Splitter

Then you can actually open a TTC file to extract individual .TTF font files for installation on Windows.

Another more complicated issue is if you are faced with a Mac "Font Suitcase". In Windows these files show as being 0KB - yet there are font files inside. To open these requires a two step solution as shown by this very helpful tutorial. (Using a Mac's 'Terminal' to extract files, followed by using Peter Upfold's DfontSplitter)

These solutions are completely free and very very helpful.

Who got the following error message when installing the font:

If you have having a such problem while installing the font in Windows 10 you just need to double click into downloaded font and should follow the steps as appear in the screen. Do not copy and paste the downloaded font if you do so then above error message may appears.

BirendraBirendra
1
Add a comment  |
Highly active question. Earn 10 reputation (not counting the association bonus) in order to answer this question. The reputation requirement helps protect this question from spam and non-answer activity.

Not the answer you're looking for? Browse other questions tagged windows-7 macos fonts truetype or ask your own question.

0
How do I install boot camp on Windows 7
1
VNC, How can I connect to my Mac with RealVNC, it works with TighVNC, connection aborted 10053?
5
Mac OS X read/write NTFS support
3
Mac OS X can't be installed on this computer - strange error from boot - install of Snow Leopard
13
How can I install s3cmd on Mac OS X Yosemite?
0
How can I upgrade iMac with Mac OS X 10.6 (Snow Leopard) to Mac OS X 10.10 (Yosemite)?