I installed Adobe Acrobat XI about a year ago. I wanted to uninstall it and install the new version but during the uninstall suddenly the computer shuts down and now I cannot uninstall or install another version. When I want to uninstall it it gives this message.

When I personally want to find the .msi I can't. What should I do?

The uninstall failed. What should I do?

There are several programs that will clean up leftovers that remain after a failed uninstall.

Try one (or more) of the following options and then try to install again the new version of Acrobat.

The Adobe Reader and Acrobat Cleaner Tool is designed to fix such issues by cleaning up corrupted installations, including removing or fixing corrupted files, removing or changing permissions registry entries, etc.

The registry clean option may fix any issues that prevent you from running the installer for the newer version of Acrobat.

We also offer a portable version for installing on USB thumb drives. Visit the builds page to download.

It includes a Registry Cleaner:

The free version of CCleaner has this capability. 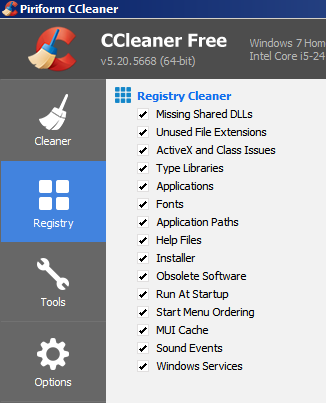 When you choose to fix any registry issues you are given the option to backup the registry changes.

Follow these steps to automatically repair issues including corrupted registry keys that block you from installing or removing programs:

Source Fix problems that block programs from being installed or removed

IObit Uninstaller 3 is a light and FREE uninstall tool that helps you to remove unwanted programs and leftovers completely without any hassle. It detects and categorizes all of the installed programs, and allows bulk uninstallation with just ONE click!

Revo Uninstaller Pro helps you to uninstall software and remove unwanted programs installed on your computer easily! Even if you have problems uninstalling and cannot uninstall them from "Windows Programs and Features (Add or Remove Programs)" control panel applet.

Revo Uninstaller is a much faster and more powerful alternative to "Windows Programs and Features (Add or Remove Programs)" applet! It has very powerful features to uninstall and remove programs.

There is a freeware version available.

I am not affiliated with Piriform, IObit Uninstaller 3 or Revo Uninstaller Pro in any way, I am just an end user of the software.

Locate the Adobe Acrobat folder, and delete it. I know it doesn't sound professional, but whenever a program would not install, I just deleted everything it could use, (start menu items, desktop icons, etc, etc) and restarted. Try to install the newer version after that. Good luck!

First, it may be nice to know where Windows is getting the C:\Users\sobhan\Desktop\Adobe Acrobat XI\Adobe Acrobat XI\AcroPro.msi from. I suspect you'll be able to see that command if you go to a command prompt and run this:

It doesn't seem like you need to have a UAC-elevated command prompt. (However, some programs do give different results based on if UAC is enabled. Most give an error message, like "net session", but others just give a different result.)

You can chop off everything after the pipes if you want to see more info, like the DisplayName value.

Note: If you choose to use the graphical interface, RegEdit, then you should know that HKLM is a shortcut for HKEY_LOCAL_MACHINE

I'm noticing the Adobe Acrobat XI\Adobe Acrobat XI\AcroPro.msi filename you mention is under your Desktop. My guess is that these files got deleted, likely in an attempt to clean up a desktop. You could try to somehow restore the file to that location, but that probably won't be super easy and so it won't be worth the effort. In all honesty, you're probably more likely to be better off just using a method to manually clean off the software (deleting the files), and then eliminate the related entry from HKLM\Software\Microsoft\Windows\CurrentVersion\Uninstall
Just deleting the files (for the old version) may not seem like a very thorough cleaning job, as that approach may leave behind some registry entries. However, chances are that nearly every one of those remaining registry entries are likely to just be used once you get the new version installed, so you can rest easy knowing that you're not leaving a ton of useless clutter in the registry.

Now, as for why you can't install, I don't know. I don't think people should be expected to know, based on the very limited information you've provided so far. There are probably tons of different reasons that an installation program could break. I remember working for a computer support company and a business just couldn't get their Adobe installed. Turns out that an employee had run some software that cracked the old version of Adobe, and that software modified the HOSTS file (in C:\Windows\System32\Drivers\etc) which had a bunch of lines related to Adobe. (And we had a very good idea of just what employee did such a thing.) I cleared out those entries from the HOSTS file, and may have done some more work (like flushing the DNS cache, with IPConfig/FlushDNS), and then I was easily able to register the new version (like what the business was trying to properly do). So that's a real-world experience that did happen.

However, I do suspect your cause may be entirely different. Because there are numerous reasons why a software installation could fail, finding out why Adobe won't install is probably really worth a separate question by itself, and more details on what you experience when you try to install it.

Not the answer you're looking for? Browse other questions tagged windows-10 adobe-acrobat or ask your own question.

2
Speeding up the browsing of PDFs in Adobe Acrobat
3
Why do some PDFs lag in Adobe Acrobat?
6
How to open a .zip / .tar.* file attached in a .pdf file in Adobe Reader/Acrobat XI?
1
How do I change page scaling while printing a PDF on Windows 10?
1
Windows 7 installer for Adobe Acrobat Reader for viewing PDF files is broken
1
Microsoft Access Database Engine - cannot install either 32-bit nor 64-bit version