Why is Google Chrome reporting “Your clock is ahead” message?

I was about to visit a site on Chrome and found the following message displayed: 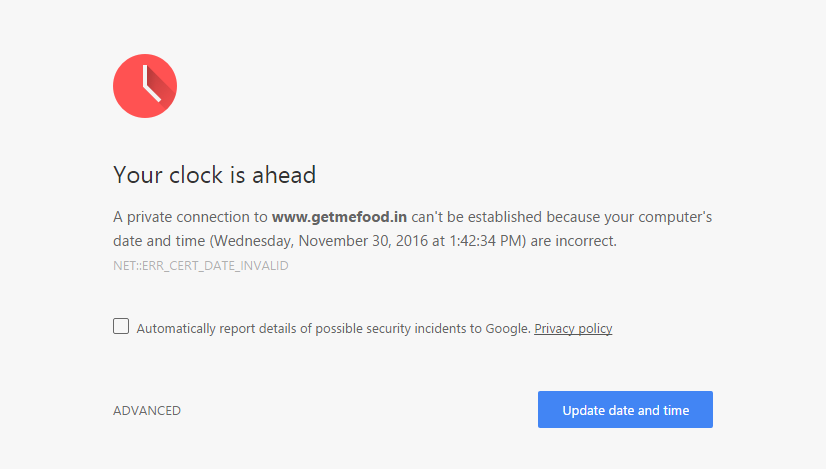 The same site opens up in Firefox without any problem. This makes me believe the issue is browser-specific. What does this mean? The server time is behind my local time? And if so, why would Chrome not allow me to view the page.

Or is this something that the developer of the website coded into his page as a condition?

Btw, the clock time is perfectly fine. I've not moved it ahead by x hours/minutes.

My view on the answer is simply that the two browsers are built differently and their error checking works in different ways. Furthermore, they have different default settings and the settings on either browser may have been changed at some point which influences how they work. You're effectively saying, here's two programs, they do similar jobs but why do they work differently?

As you've seen yourself, Chrome will throw an error that your system clock time is incorrect if it thinks it's not matching up: this creates an SSL error where Chrome will notify you, the user if it thinks something dodgy is going on. It's one step in a process of SSL checking to ensure you're kept as safe as possible. It's extremely unlikely that it's related to the coding of the webpage itself, website developers usually want to make their websites as accessible as possible to everyone, and this is also a known Chrome error.

Firefox has it's own version which pops up from time to time for (apparently) similar reasons: 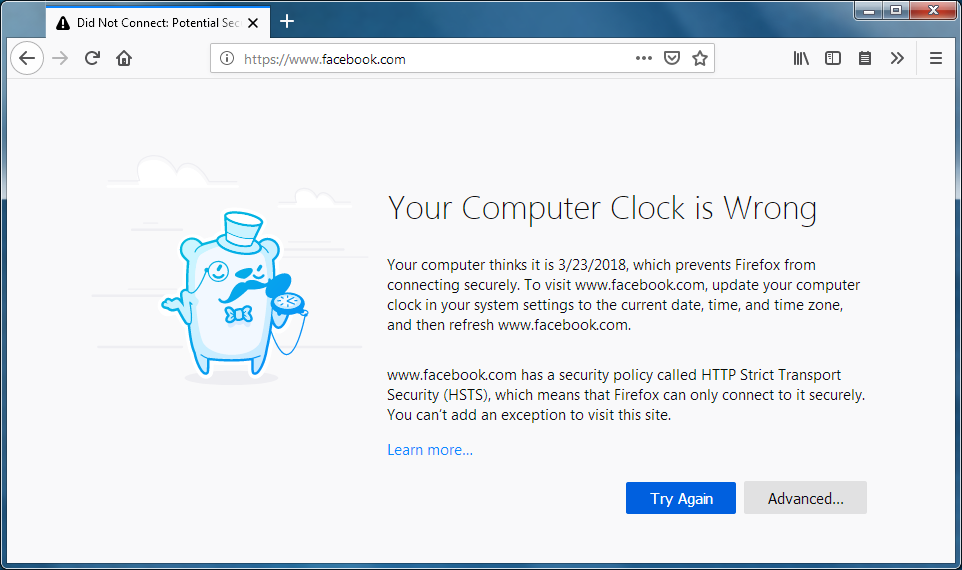 So there's a few reasons why the two act differently:

The certificate is expired last couple of times I got this. Does it let you set an exception - Android verion won't let me so the only other way was to set "--ignore-certificate-errors" in the command line.

If you click on the advanced link, you will get your answer. It says something to the effect that it cannot verify the validity of security certificates without the proper date/time.

"Your clock is behind" or "Your clock is ahead" or "NET::ERR_CERT_DATE_INVALID" You'll see this error if your computer or mobile device's date and time are inaccurate.

To fix the error, open your device's clock and make sure the time and date are correct or go this link https://www.youtube.com/watch?v=-qhwtXoRmHc

Not the answer you're looking for? Browse other questions tagged windows-8 google-chrome or ask your own question.

2
Google Chrome - Security Issue
27
Change a favicon locally in google chrome
5
Is there a Platypus-like extension for Google Chrome?
3
Why do I get this message from chrome when navigating to https://www.amazon.com?
1
Google Chrome issues
0
Why doesn't Google Chrome show PHP in page source?
0
How to keep local copies of edited files in Google Chrome Developer Tools?
1
How to toggle JavaScript on demand (Chrome browser)