How do I list all values in 3 different columns in a new column?

I have three seperate columns with values in an Excel Sheet. Now I want to create a new column that concatenates all values from these columns. When I add new values to one of these three columns, I want the summarized column to update automatically. How do I do this?

Enter the following Event Macro in the worksheet code area:

It will monitor changes to columns A through C and update column D accordingly. 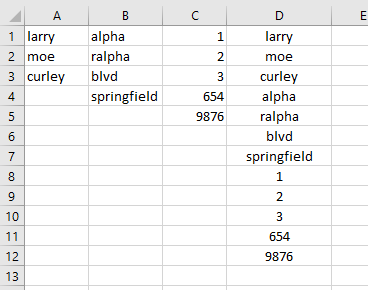 Because it is worksheet code, it is very easy to install and automatic to use:

If you have any concerns, first try it on a trial worksheet.

If you save the workbook, the macro will be saved with it. If you are using a version of Excel later then 2003, you must save the file as .xlsm rather than .xlsx

To remove the macro:

To learn more about macros in general, see:

Macros must be enabled for this to work!

I’ve got an answer that doesn’t require coding.

Columns E and F contain the (0-based) column and row number of the value in Column D.  For example, 0,0 is A1, 0,2 is A3, 1,3 is B4, etc.  A negative value in Column E indicates that you are beyond the end of the data.  The formula in Column D evaluates to blank if the E value is negative; otherwise, it uses the OFFSET() function to retrieve the value indexed by the E and F numbers.

The formulas in Columns E and F check whether the previous E value is negative, and, if it is, set the next row to -1,0 — so, once you’re past the end of the list, you’re past it, and you don’t start tying yourself into knots.  Otherwise, if there is a next value in the current column, we advance to that value (E1,F1+1).  Otherwise, we go to the top of the next column — except, if the current column is #2 (C), we advance to column #-1, because we’re at the end. 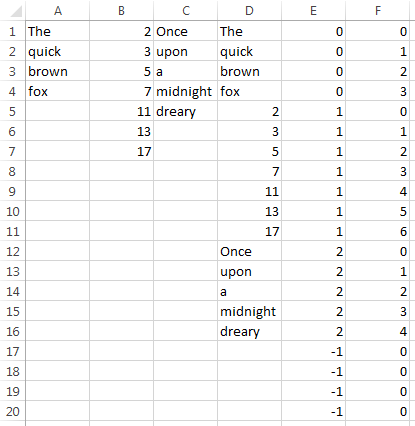 You can now add and delete values in Columns A, B and C, and the list in Column D will update automatically.  Once you get this working, you can hide the helper columns.

2
How to find value in another column in the same row of excel?
0
Can I create a cell with enumerated values in a csv file
2
Count non-blank values after a cartesian product in excel
2
Excel 2013 Search for substring in column using lookup column and return accompanying value
0
MS Excel - I wish to count unique values based on a parent column
1
Excel How do I list the options of a filter in a cell?
4
Compare columns in two worksheets, list missing values on third worksheet
1
SUMIF - compare two columns of strings, sum related values
0
Excel SUM from two tables based on ID in both tables