Windows 10 sees much more monitors than I have

After a recent update, or after I played around with installing Ionic Framework and Visual Studio 2015 Community Edition, right after a restart, I suddenly have not 2, but several monitors detected by Windows 10.

Screen 1 is my laptop screen, and screen 2 is my monitor, connected via HDMI. When they first appeared, some of them were duplicated in groups of 2, while others were extensions.

When I disconnect my monitor, these screens don't disappear, and even worse - I can't disconnect one of these "screens", so I have to duplicate it with my laptop screen.

I have alleviated all major symptoms of the problem, except for one more: The sound from the speakers embedded in my monitor has also ceased to work.

With all of that, I really don't want to fix any more symptoms, but want to get to the core of the problem and remove all of this junk.

I tried uninstalling Intel(R) HD Graphics 4600 drivers, but they got themselves re-installed and all of this junk re-appeared again.
I tried several restarts obviously, and it didn't help.
I tried disabling the device from the device manager and it didn't have any effect. Under the "Monitors" section of the Device Manager in Windows I have 4x "Generic Non-PnP Monitor", and 2x "Generic PnP Monitor".
I tried restoring from a restore point but that failed miserably (with a memory error right at the start).

What might be causing it? And how can I fix it?

On the rare occasions that I have seen this happen before, it is usually caused by the display driver.

Faced with the same scenario, I would manually create a System Restore point as a potential fall-back and then check for an updated graphics driver to install. If you are already running the latest version, try dropping back to an older version and see if it alleviates the problem.

In case someone else is having the same problem, this is what worked for me. I am on an Asus N550JV and the problem occurs only with hyper-V enabled.

Device Manager -> Display Drivers -> right-click on Intel(R) HD Graphics 4600 -> Update Driver -> browse My Computer for driver software -> Let me pick from a list -> Choose the device driver whose version starts with 10.* I have two more options that their version starts with 20.* and neither of them fixed my problem. 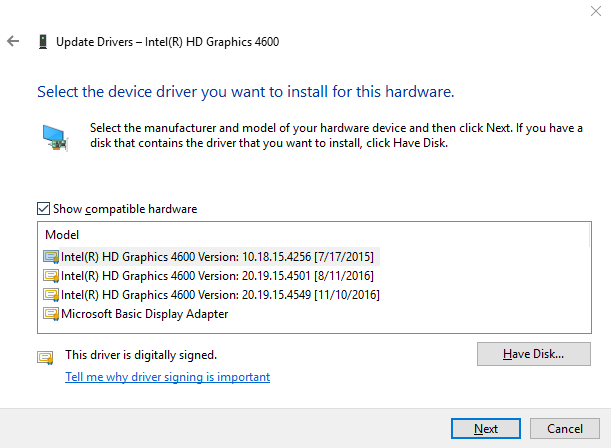 Intel's most recent drivers for this graphics adaptor (version 15.40.37.4835) seem to fix the problem of phantom monitors when Hyper-V is enabled.

Not the answer you're looking for? Browse other questions tagged windows-10 multiple-monitors or ask your own question.