How do I find out which Windows 10 four-digit-version (not build number) am I running? [duplicate]

I currently face some problems with an update for Windows 10, and all guides, advice and troubleshoot sites out there start of by assuming you have specific versions of Windows 10 already running. But I am afraid I don't have those, since one of those numbers seems to be the update that gets stuck and doesn't finish correctly.

How do I see which version (not build number) of Windows 10 I'm actually running? All answers I've seen so far help you find which build number you have --since it seems more relevant for Windows apps developers--, but not the four-digit version number Microsoft is mentioning for troubleshooting the failed updates.

I've tried suggestions from a Windows 8.1 related question (Which Windows 8.1 edition am I running); in particular I got some information with the following command line:

Also with msinfo32.exe and systeminfo.exe but still the same lack of 4-digit number. 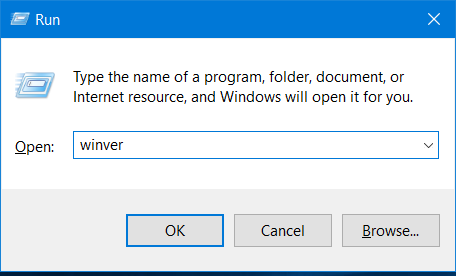 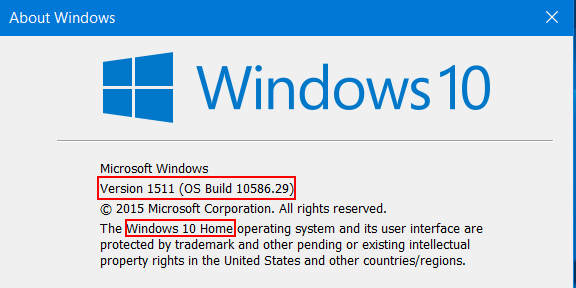 Now I feel kind of stupid having asked a question that is answered directly in answers.microsoft.com. I'll answer it here, for the sake of those --like me-- that look first in Stack Exchange.

The answer is right in the about from within settings (not the System properties that you pop up with Win + pause): Settings -> System -> About

The number I was looking for is that at "Version".

You can also get that information with the winver command in either of the following ways:

Not the answer you're looking for? Browse other questions tagged windows-10 windows-update or ask your own question.

7
What is a Windows build string and how to locate it?
0
Windows 10 Insider version updates not installing
2
Cannot update from Windows 10 Build 10240
0
Can't install update 'Upgrade to Windows 10 Enterprise, version 1511, 10586' (KB3012973)
3
Windows 10 thinks it's up to date, but it's not
5
How to block Windows 10 1607 update completely
0
Windows 10 1607 LTSB cannot install security updates
0
Does an evaluation install of Windows Server Essentials get Feature updates?