I've read several solutions to this problem, all of which seem to involve looking for a key in the registry at HKEY_LOCAL_MACHINE\SYSTEM\CurrentControlSet\Control\GraphicsDrivers\Configuration, which is prefixed with SIMULATED_. I have no such key in there. I only have two keys: One that represents two of my 3 monitors, and another that represents all three.

I tried deleting everything in HKEY_LOCAL_MACHINE\SYSTEM\CurrentControlSet\Control\GraphicsDrivers\Configuration and in HKEY_LOCAL_MACHINE\SYSTEM\CurrentControlSet\Control\GraphicsDrivers\Connectivity and rebooted. This reset my monitor settings, and I had to re-arrange the desktops accordingly... but the problem still comes up now and again.

I've noticed just now that when I woke the monitors, my center monitor was set to a resolution of 1920x1080 while the side monitors were 2560x1440. So somehow, the resolution is getting changed at random, and (most of the time) it gets reverted back, thus causing the shift in windows.

A few other times, I've noticed that all my desktop icons have been moved to another screen (I keep them in the center) despite the center screen being the "primary" in Windows. So here, it seems, two monitors just randomly swapped places in settings.

Here's a screenshot of my relevant registry settings. I've selected one of the registry keys, but the other two below are the exact same, it seems. 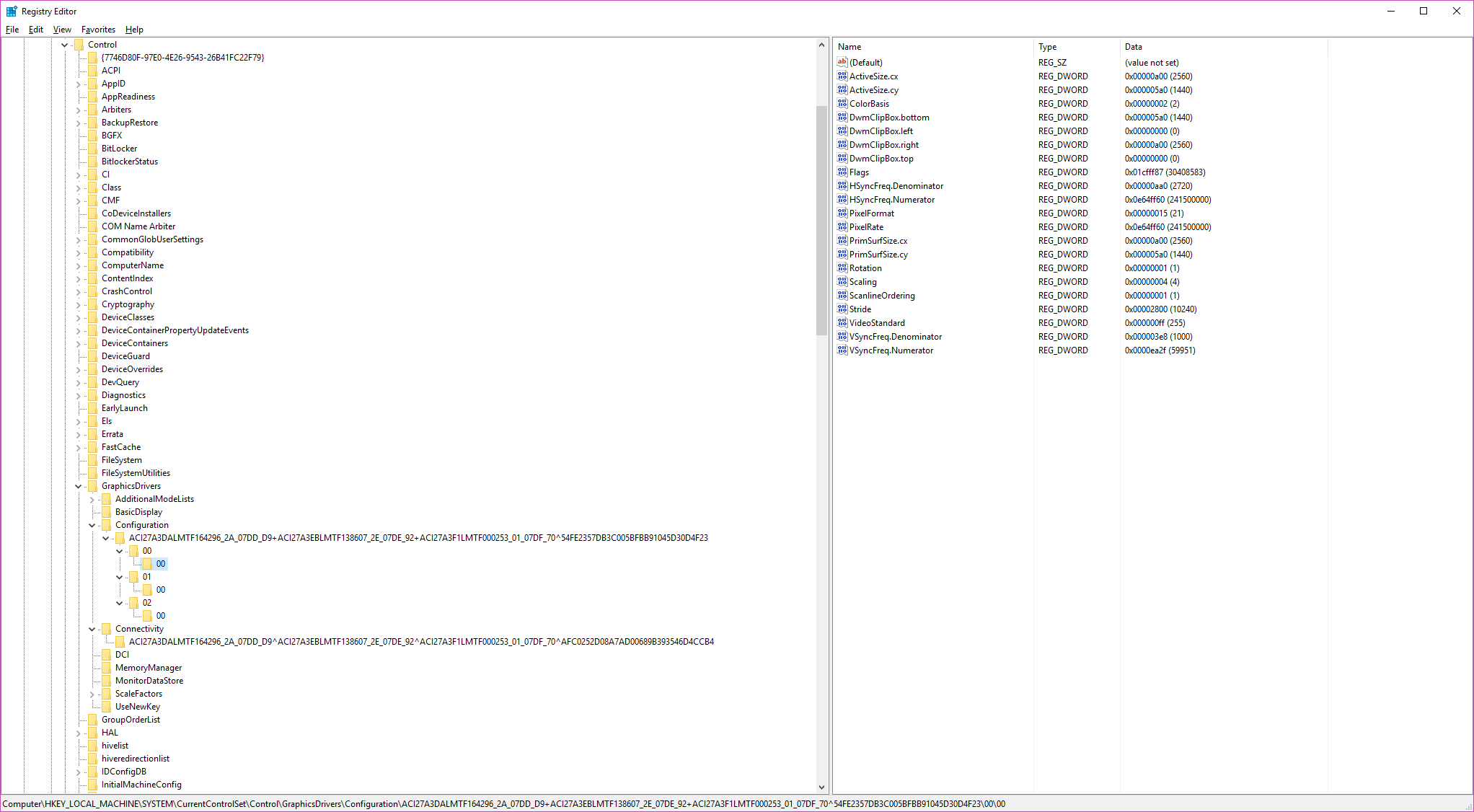 I have three ASUS PB278Q monitors (27 inch 2560x1440) and I've been having problems ever since I upgraded from Windows 8.1 to Windows 10 last year. I often pin two specific windows next to eachother on one monitor, and when I come back to my computer after a long period of time, I find that sometimes (but not all the time) the windows are not positioned correctly anymore. They are on the same monitor, but it's as if the resolution changed overnight and now the windows are not where they were.

On one of my other monitors, I find that sometimes (but again, not always) the windows completely move to my center monitor.

DDC/CI is enabled for all three monitors.

I have a NVidia GTX 960 with fairly recent (if not newest) drivers.

According to your description, it seems that your problem is mostly with the DisplayPort ports. DisplayPort ports under Windows are implemented differently than VGA and DVI ports, in that when they enter the sleep state Windows treats them as if they were removed, even displacing their displayed windows to other monitors. When the monitor wakes up, Windows treats it as a new device being discovered. This behavior might be the cause of your problems.

One solution might be to disable the monitor from sleeping:

I have also seen reports that it helps to unset USB Selective suspend under Control Panel / Power Options / Change Plan Settings / Change Advanced / Power Settings / USB Settings. These reports are suspect, since the monitor is not a USB device, but this might be worth trying.

For this solution see these answers of mine :

Honestly, all i can say is what worked for me.

To me it looks like you are looking for a solution and this is a good real solution. You really don't have to mess around in the registry to get what you want to achieve.

This is the tool: http://dualmonitortool.sourceforge.net

and here is the screenshot of the tool of my current settings. You can see i have multiple resolutions set up and lots of monitors. Nothing ever changes for me, i just set it up once and no problems again.

Recently i even disabled auto start with Windows and the problem didnt return. To me this feels like the tool somehow makes those reg changes that you are looking for.

Not the answer you're looking for? Browse other questions tagged windows-10 multiple-monitors or ask your own question.