Mystery WiFi network shows up when laptop is connected

When my laptop, a Dell XPS 15 (9530), is connected to my WiFi network, a new network with the SSID "DIRECT-IE[laptop name]msSP", where "[laptop name]" is replaced with the name of the computer.

Interestingly, this network is on the same channel as the network to which the laptop is connected, and this changes if I change the channel setting on the router.

The effect persists even if the hotspot feature on the laptop is turned off, and only appears when it is connected to a network.

I was wondering whether this is some kind of WiFi Direct feature, but it does not appear when I search for WiFi direct-enabled devices using my smartphone.

UPDATE: In Task Manager, two network connections are shown, one being the normal connection. However, the other, with no activity, is labelled "Microsoft Wi-Fi Direct Virtual Adapter #3", with the SSID listed the same as the aforementioned cryptic network name. It appears Windows thinks it is connected to the network originating from this very computer. 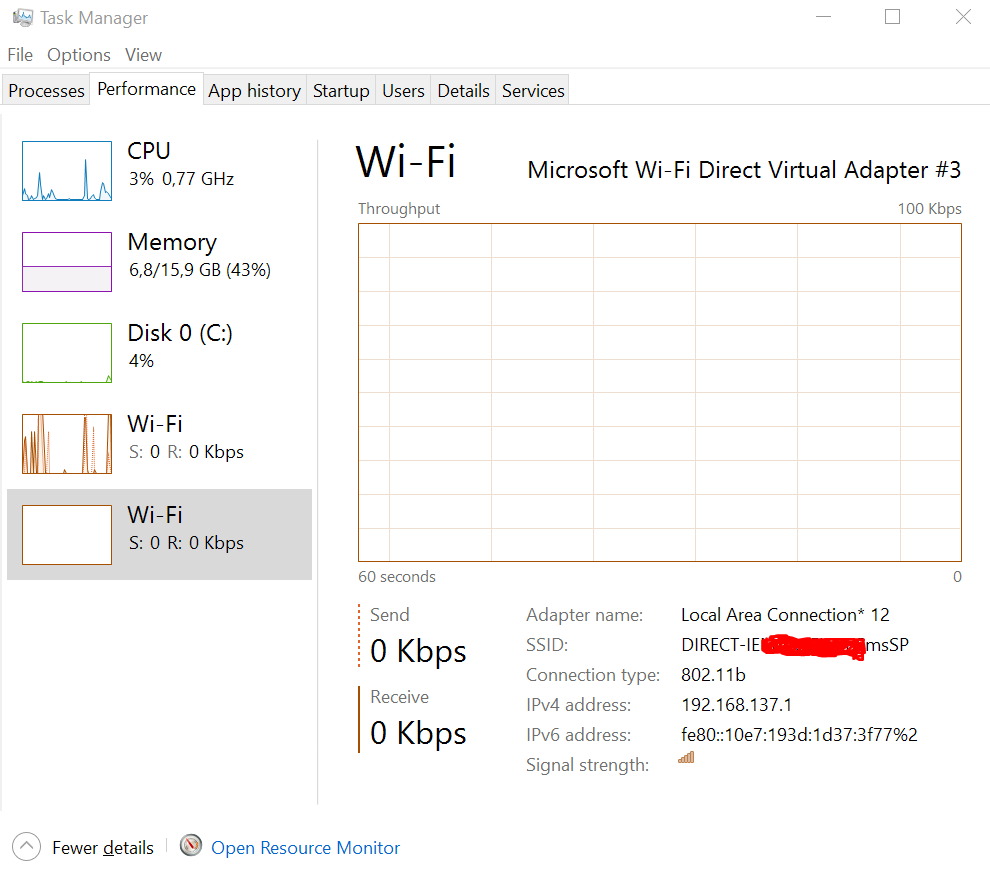 Its related to screen casting - which uses miracast and wifi direct. The feature is called "Projecting to this PC" and found under "connect" in the action center . Its a new feature with windows 10 anniversary update, and lets you use miracast to send the output from one system to another (works with my android marshmallow android phone as well, to an arbitrary system).

Turning it off and on makes that device appear and disappear.

Not the answer you're looking for? Browse other questions tagged windows networking wireless-networking wifi-configuration or ask your own question.

1
Wifi network SSID not visible
0
W10 laptop no longer “sees” home WiFi
2
Can I create a wifi hotspot using a computer that connected a wifi already?
4
how to make a wifi hotspot from mac when it is connected to wifi
0
Windows creates wireless network when hotspot is disabled
1
To network a LAN Connected Desktop and Wifi Connected laptop on same router
0
How to easily reconnect to hidden WIFI network - Windows 8
2
“netsh wlan show networks” only shows the currently connected WiFi network