Where is this "Applications" Directory in Windows located?

How do I open this Applications Directory in Windows? I use this folder to write AutoHotKey shortcuts which work on any one of my computers regardless of where an application has been installed, but then I forgot how to open it. Typing "Applications" into the url-esque bar of File Explorer does nothing. Does anyone know how to open it? 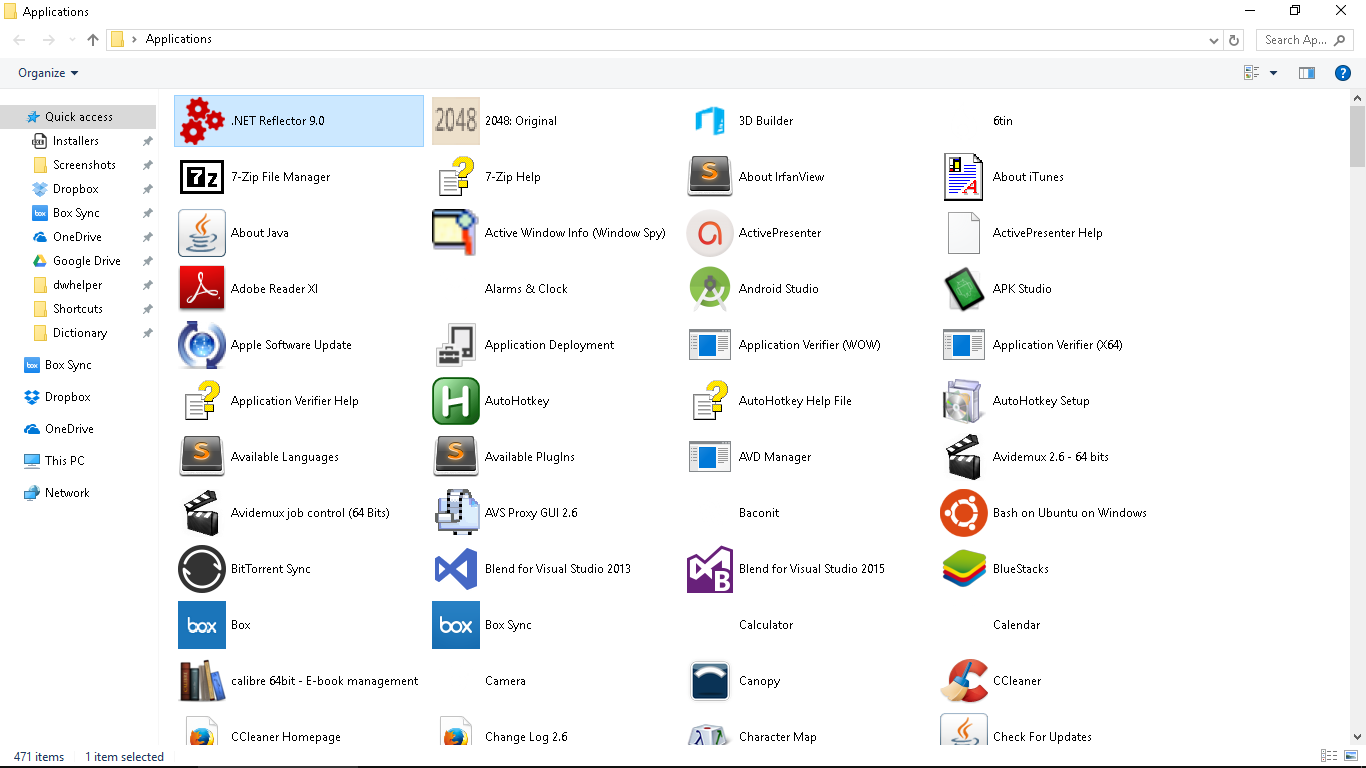 I found a list of other valid GUID : here

Actually I found the solution: open the run dialog, and use the command "Shell:AppsFolder"

More as an academic answer than anything else, but it's somewhat like your desktop, in that it is a combination of multiple locations. As is well known, your desktop shows the union of the contents of C:\Users\<Your name>\Desktop and C:\Users\Public\Desktop

shell:appsfolder is likewise a union: it shows both your "regular" installed apps, i.e. those things found in C:\Program Files and C:\Program Files (x86) together with any Windows Store Apps you have installed.

So in effect, it is the combination of all three of those locations.

It's trivial to show that normal installed files, seen in the Programs and Features page of the old style control panel are visible there, showing that Store Apps are installed where they are takes a little more effort.

C:\Program Files\WindowsApps is not directly visible, it requires an elevated command prompt to look inside (*). If you do a directory in there, you can see the full name of the installed apps you have, and empirically, it appears that even apps that have been uninstalled, e.g. Zune Music and Zune Video in my case, still leave a small footprint behind. This presumably makes it easier to reinstall them if so desired.

(*) Note that it is possible in a Domain environment for a group policy to lock this folder down even more tightly such that only a command prompt with TrustedInstaller credentials can view it. Overall a smart move on the part of the IT department involved IMEHO, since it's possible to do damage in there if you don't know what you're up to.

To demonstrate that Store Apps are located there, by far the easiest method is to download Sysinternal's Process Explorer, start it up, then start a Store App, and find it in the Process Explorer. Display the Image Path, and it will show that it's in a subfolder of C:\Program Files\WindowsApps.

TL;DR it's not one single location, but a combination of several locations combined into a unified view.

Not the answer you're looking for? Browse other questions tagged windows-10 windows-explorer autohotkey or ask your own question.

1
Difference in tab completion and order in Windows Explorer and the Open/Save file dialog
2
How to quickly assign keyboard shortcuts to launch your favorite applications using autohotkey
1
Mapping Ctrl+Shift+<key> to open folder puts focus on sort bar
0
Use Windows Explorer for viewing web pages
121
Cortana Search is not finding applications on Windows 10
0
Determine current status of Unikey: Vietnamese/English typing mode
1
Way to open a folder from Windows Explorer in cmd.exe under Windows 10 with one shortcut?
0
Windows 10 - Change Folder Selection Dialog
1
Opening the about: links used specifically for Firefox from File explorer