This happens on both my Windows 10 systems, a late 2012 iMac and a custom-built PC using an ASRock Z170 motherboard and an Insignia Bluetooth dongle.

When using either Discord or Mumble and either Apple AirPods or a Bose QuietComfort 35 headset, I cannot hear sound from any other application unless I set the output device to the "Hands-Free Device" instead of the "Stereo Headphones" device.

The problem with that is the "Hands-Free Device" has only one sound quality option, 8 KHz, which is nowhere near the 44.1 KHz default of the "Stereo Headphones" output device. When I select the "Stereo Headphones" device the sound is great, until I open either of the mentioned voice chat applications, whereupon I can't hear anything until I close that program. Also, my mic does not work unless I re-set the communications device or default device to the hands-free option. If I set the hands-free device as the communications device, everything in the voice chat app works, but no other program has any sound.

I believe this is because the "Hands-Free" and "Stereo Headphones" devices are two separate Bluetooth services, and the Hands-Free device is activated whenever the voice chat is engaged, and remains that way until the "call" is over. I realize the "Communications" tab in the sound control panel is supposed to fix this sort of thing, but it changes nothing in this scenario.

EDIT: I've read the suggestions in this post, which I just discovered, and none of that works:

This annoying behaviour is caused by limited Bluetooth bandwitch when using both mic+headset channels. It's quite well explained here: https://www.howtogeek.com/354321/why-bluetooth-headsets-are-terrible-on-windows-pcs/

Here's the salient part for your issue:

If you’re just using a Bluetooth headset to take a phone call, that might be fine. If you want to speak into your headset’s mic while listening to music, playing a game, or watching a video on your PC, you’ll be frustrated.

For a PC headset with an integrated microphone, Bluetooth is a terrible choice. You’re better off getting a wired headset, or even just getting a separate microphone.

Bluetooth 5.0, which has already been announced, offers much higher bandwidth. This should let future Bluetooth headsets play back audio at high quality while the microphone is being used, in theory.

You need a new headset. 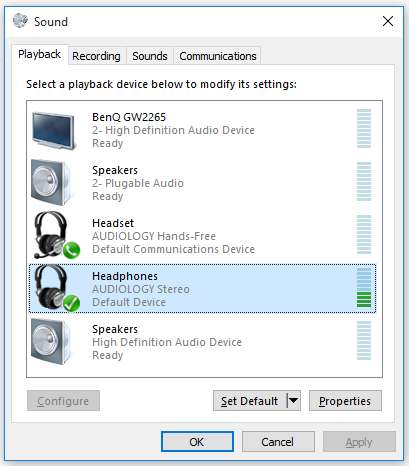 Notice the bottom check mark is Stereo, and the phone icon is Hands-Free. For microphones like this, Hand-Free also uses Mono playback, which typically sounds bad. It can only use Mono/Voice/Hands-Free or Stereo (no voice) at one time. If an application can use voice, it will typically turn off stereo but Mono won't work, and the sound will cut out. You need to set Hands-Free/Mono as default, and deal with the poor sound quality.

I am not sure if this is a problem with all bluetooth headphones or only ones with built-in microphones. I have bought 2 different headsets off amazon and they were both setup this way.

So better late than never, because I had the same issue and just solved it:

I saw that my bluetooth headphones had multiple entries for hands-free.

Once this is done, restart the computer. Once it restarted I could now use the headphones like I wanted them in the first place.

This might be late but I got mine working by going doing the following:

A popup window should appear where you can find all the sound components of your device. Now do:

Clicking on Test option should produce a sound by now.

This works for discord(at least for me). You need to set the output on discord to headphones(not headset) and to set headphones as default in sounds.

I have the Bose Quietcomfort and solved the problem by using the cord that connects the headphones to the computer. When using Bluetooth I could only manage to chose between chat or game sound.

Sound quality in voip is not all that great (for the other side).

Here is how I get by: Set the default communication device as the hardware microphone and the output device as Bluetooth stereo for all applications manually. If your using windows 10 this is easily done in the settings application under advanced sound. I don't know the equivalent for previous windows OS.

solved the problem by plugging and using the mic from an old headset and use it as a mic only.

Change the default device used by your communication programs. Skype caused a similar problem for me until I changed it's default device

I managed to solve this problem. You have to give up on mic. So go to Sounds then recording and turn off your headphones mic. Enjoy.

Not the answer you're looking for? Browse other questions tagged windows-10 bluetooth peripherals or ask your own question.