So, the 'right' half of my pair of headphones broke (the transducer+wire are fine, but the earpiece broke on the headband and so the earpiece won't sit over my ear). So now the right channel is being broadcast to my cube neighbors when I wear my headphones. Yes, they look very silly.

Is there a way to ensure, in Windows XP (or Windows Media Player), that all stereo sound is downmixed to the left channel only (ie, in mono) so my neighbors don't hear my music? I know that I can setup the mixer to set the balance to 100% left, but information in the right channel won't be heard.

Did you check Control Panel > Sounds and Audio Devices > Audio > Sound Playback > Advanced ? You can set the speakers to all possible "Mono" choices you might have. Then set the balance to 100% left. That should work.

I tried to mix the two channels and I can't in Windows Media Player or the Control Panel. 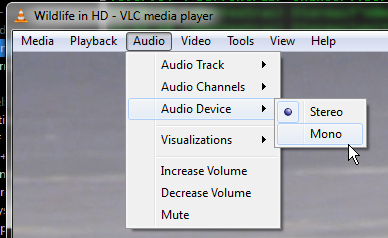 In the Enhancements tab, check the "Headphone Virtualization".

I know this is an old post but people may still be looking for an answer, and I have found it.

About two or three months ago my left speaker in the laptop died. It did not bother me because most games and music seemed to sound just fine with one speaker. Movies and such usually get routed through the headphone jack to the surround sound system. But today I wanted to listen to a podcast and there was no sound.

Windows volume meter showed there was in fact something playing but it was not coming out the right speaker. I tried playing something else and it played fine. So I figured that the pod cast must be playing only out the left channel. So started my quest, to set windows 7 up to play sound in mono. Going to playback devices and configure for the speaker only had a stereo setting.

I have a realtek driver loaded and nowhere could I find a mono setting. So I finally ended up at the realtek site and downloaded a generic vista/win7 driver. It did not want to install because the driver was not signed. I uninstalled the old driver. I tried again to install the generic driver I had just downloaded without success. So finally I decided not to use the setup.exe and instead double clicked on alcupd.exe (the driver update program).

Only thing is that because I uninstalled the laptops sound driver, I no longer have any of the environment or equalizer settings. Not a big deal for me, If I need them I will just re-install the laptop sound drivers. So I right click on the speaker icon in the taskbar and choose playback devices, then the properties for the headphone. I renamed headphone to Internal Speaker.

Then under enhancements I chose Headphone virtualization. Success, now can hear both the left and right channels on the one good right speaker, with just slightly less volume. I was able to hear my podcast just fine with the new settings.

So I guess "Headphone virtualization" equals Mono sound. Hey it works for me, maybe it will work for you.

Not the answer you're looking for? Browse other questions tagged windows-xp audio mono stereo mixing or ask your own question.

8
How can I set my headphones to mono in Windows 7?
3
How can I downmix all system audio to mono?
40
How do I force single (only) channel audio in youtube/flash videos to play in both (left/right) channels?
21
Is there a way to set iTunes to play in mono?
9
Make headphone output mono
3
Can you downmix Windows 7 sound to mono?
4
Change headphone output to mono in Windows 8
-1
Change computer to mono sound?
0
Sounds come from only one speaker
0
Force Windows 10 into mono and disable a speaker
See more linked questions

11
How do you make mono audio track playback in stereo in Ubuntu?
9
Make headphone output mono
4
combining stereo in windows 7
40
How do I force single (only) channel audio in youtube/flash videos to play in both (left/right) channels?
3
Merge stereo channels into one side?
5
Convert stereo audio to mono in AVI file
3
Headphones stereo sound in mono
4
How to convert stereo to right-channel mono on Windows 8?