BEFORE MARKING IT AS DUPLICATE:
Here's what I've tried:

If I turn on my computer and open all my applications, I can put my computer to sleep with no problem, but after some hours of it being on, if I try to put it to sleep, it will turn off the screen, but it will not sleep, and the only way to use the computer again is to force a restart by holding down the power button.

This started to happen after I switched my old HD to an SSD and reinstaled windows 10.

...But after killing chrome, it started to show the following:

Two important things:
- The Kernel entry vanished after I closed Spotify
- I turned my computer on just now, so I can put it to sleep without problems even with the Kernel entry on my -requests, the issue seems to appear after 2 hours

EDIT 3: I have reasons to believe the Kernel thing is not the issue, this forum post is similar to my problem, my computer won't shut off also, after two hours.
https://www.tenforums.com/general-support/66640-wont-enter-sleep-legacy-kernel-caller.html

EDIT 4: Maybe this can be related, maybe not...
When sleeping normally (with the computer on for less than 2 hours), the disk light blinks a lot, and then it goes to sleep.
But when the sleep fails, the disk light blinks 3 or 4 times before turning off, and then the wifi light and power light stays on. That's when the computer freezes.
My HD got replaced by a SSD recently, and that's when the problems started. I'm using a Dell Inspiron 14R.

EDIT 5: results from running powercfg -energy:
http://codepen.io/carvalho23lucas/full/OpXYLq/
I've added a plugin to translate the page, you can find it in the first line

EDIT 6: results from running a clean powercfg -energy:
http://codepen.io/carvalho23lucas/full/mWEZpr/
I turned off bluetooth, closed all open programs, killed the audio process and ran the command.
Immediately after that, I tried to put the computer to sleep. Failed again.

Well, after a long time dealing with that problem, I finnaly had some advances. I am not sure what exactly happened, but here are two things I did:

Later, after six hours of runtime, I closed the lid and my laptop went to sleep for the first time since win10 install (except sleep right after restart). I suppose second thing from the list above is what helped. (Of course, I've had hibernation, fast boot etc. disabled a long time ago.)

I have also had software issues (sleep, dual-boot install failure...) on a dell computer (server) with a newly installed Corsair SSD.

These problems were not present with the original HD. And to this day the same problems persists...

Are you sure your SSD is 100% compatible with the Dell hardware (SATA controller on the motherboard ...). Have you tried contacting Dell about this issue ? Have you tried another SSD/HD ?

As far as I am concerned this is a hardware issue.

I just had a similar issue, where putting the PC to sleep only turns off the displays.

In my case, there is some software prevent my PC from going to sleep. To solve this, open cmd and type in:

Under the System, there is one software process: 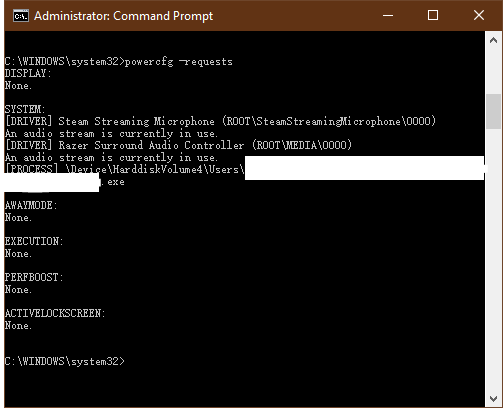 You can either close the software or override its power setting:

Not the answer you're looking for? Browse other questions tagged windows-10 sleep power-management or ask your own question.

6
How to definitely turn off "display sleep" in Ubuntu?
1
Windows doesn't put computer to sleep or turn it off after turning it on for maintenance
1
PC wakes itself immediately after being turned off or put to sleep
0
Computer waking up from sleep after being unplugged for hours
10
Windows 10 shuts down after being in sleep mode overnight
0
Windows Sleep is Fake (YouTube plays for hours while "Sleeping")
10
Windows 10 Display Won't Sleep/Turn Off (Tried Everything!)
0
PC will not automatically turn off screen or go to sleep. "powercfg /requests" shows nothing
0
Display on Windows 10 Pro won't sleep