I'm using ffplay to play an audio file in a bash script and I need to maximize volume. I've found 2 independent commands that address some part of a chain affecting the volume:

This gets me about halfway there:

Adding options like this -af "volume=1250" to the ffplay command string didn't make any perceptible difference.

I need the equivalent of the 2nd slider in the playback tab in the pavucontrol, just above the arrow in this picture: 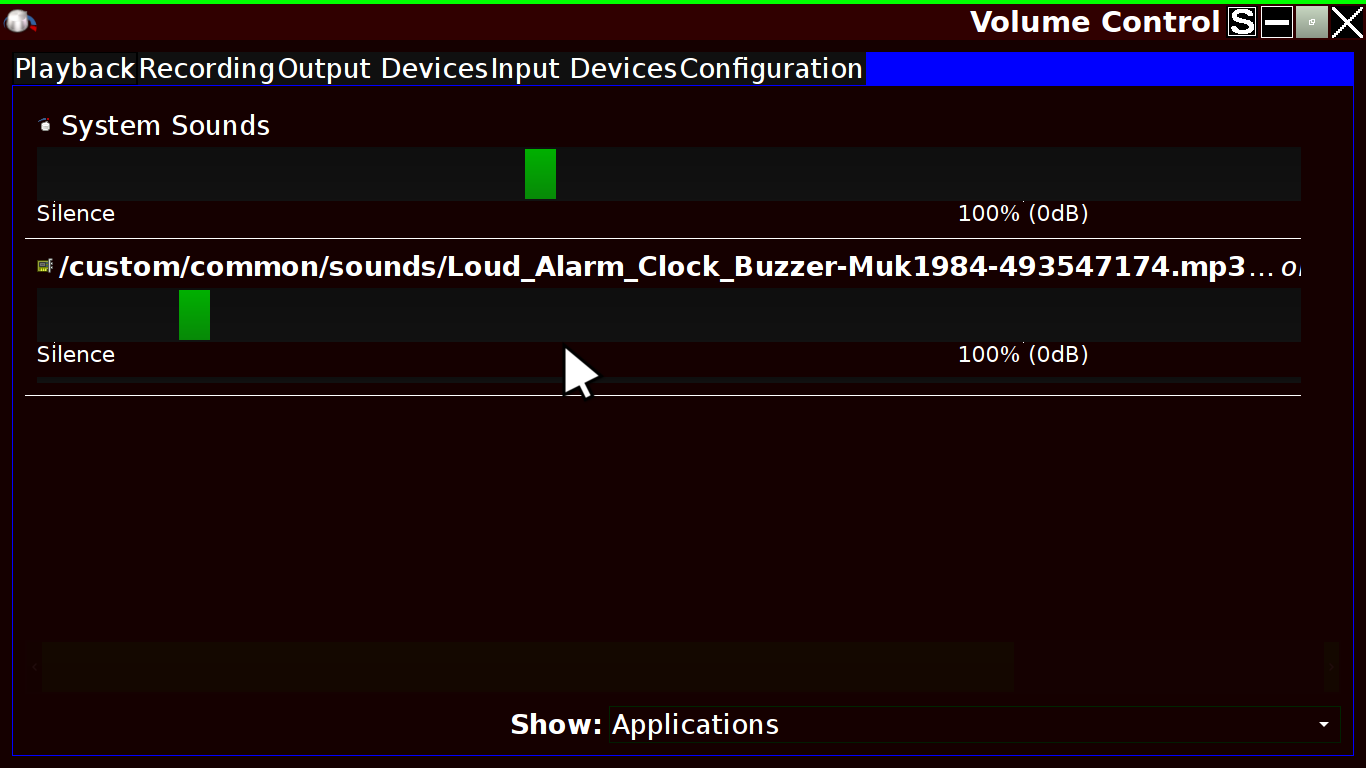 Of course it would be nice if there was one command to max out volume and I didn't have to stack them, but maybe that doesn't exist. But surely this slider has a scriptable equivalent.

I understand your question to be "how do I set the equivalent of the application stream volume slider in the 'Playback' tab of pavucontrol".

The total volume depends on both the application stream volume and the sink volume, and the latter should in general stay constant at 100% (or whatever value is needed to max out the soundcard amplifiers controlled by ALSA).

Once you find the index, use

to set the volume to 100%. This also works with pacmd, but only with raw values and not with absolute or relative percentages, so I prefer pactl. (Don't ask me why there are two different tools ...).

"I understand your question to be "how do I set the equivalent of the application stream volume slider in the 'Playback' tab of pavucontrol". "

Yes. That's the nub. The rest is context in case the question is based on erroneous assumptions or someone wants to suggest a better way.

Interesting that it comes up with a different index every time I start ffplayer, even if it is the only audio stream playing, so I'll have to grep and do a little string manipulation to put that in my script, but that shouldn't be any problem.

BTW, I don't know where I got the impression that the command:

maxed out at 200%. It goes higher. Although they tell me it can damage speakers if you push it. I assume the idea is that if you don't set this over 100% you can safely push

as high as you want, which doesn't make a heck of a lot of sense to me, so maybe it isn't true. Anyway, I now have 2 ways to wake the dead and wear out my speakers.

Not the answer you're looking for? Browse other questions tagged linux command-line bash audio or ask your own question.

0
Windows batch command equivalent for these PHP and Bash commands
2
Backtrack 4 audio volume slider is not working
0
Windows Insider Realtek audio driver plays media at 100% volume although slider is fully adjustable
0
How can I be sure that my auido isn't down sampled?