Windows virtual desktops. Cycle back to first desktop at end

Let's say I have three virtual desktops. I know I can navigate through them using:

However, is there a way to make it cycle back through to the beginning if I reach the end? So that if I am on desktop 3 "ctrl + windows + right" will take me to desktop 1?

I know this may be possible with an AutoHotkey script. But I don't know how to make that work.

The reason I need this to work this way is because I intend to map this functionality to a mouse I have just bought (it has extra buttons).Currently I need to use two buttons so that I can move backwards and forwards between desktops. I would rather just one button was needed. Hopefully this information helps.

This is just an idea for something to try and adapt... not tested.

As long as the script is running it just saves the virtual desktop active in a variable, don't need an ini file necessarily.

The script either has to be started with virtual desktop #1 active or it has to force a sync. The forcing function assumes you can press ctrl+win+left as many times as you want and it will not loop past the first virtual desktop once it gets there.

You could also add a custom duplicate shortcut for one or both directions... showing this as ctrl+alt+F8, for example in case your mouse button needs to be assigned to something other than the default windows keys for switching between desktops.

Another option is to use Finestra Virtual Desktops which does this cycling by default and the hotkeys are configurable. 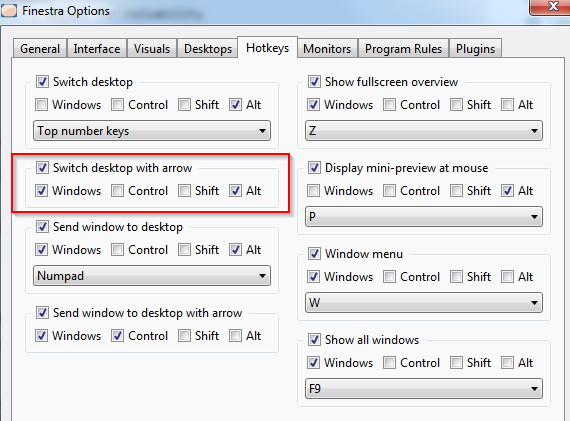 Not the answer you're looking for? Browse other questions tagged windows-10 autohotkey desktop productivity virtual-desktop or ask your own question.

0
Use AutoHotKey to remap Windows desktop commands to Numpad

1
Gnome 2.32 Virtual Desktop Looping
0
There exist a hotkey to “Go to the end of the word” in Windows?
0
How to map Capslock to CTRL+SHIFT+B?
2
ALT + ESC I want to improve upon its functionality
7
AutoHotKey - Custom shortcut to switch to next/previous desktop in Windows 10
50
Windows 10: Switch virtual deskop while in fullscreen remote desktop
1
AUTOHOTKEY | WinMove | Virtual Desktop of choice
2
Windows 10: How to Bind 4-Finger Left/Right Swipe Gesture to Keyboard Shortcut