Windows 10 periodically displays notification pop-ups with a timed dissolve (they're called "toasts" in some other UX's, not sure about Windows) in the lower-right corner of the screen.

They're frequently about software updates (both for first-party and third-party drivers and applications), the status of my RAID array, and various "tips-and-tricks" sort of things.

The problem is that they frequently fire when I'm not close to my desk. I hear a notification sound, look at the screen, see the toast box in the corner, hustle over to my desk... and the thing fades away, usually right before I can see more than "update recommended" and am left scratching my head as to what it's about.

For instance, a few minutes ago I got a toast that, from a few feet away, I could clearly see by the logo was something from Nvidia. It faded from view before I could read it. Supposedly clicking the "Action Center" button shows you notification history, but all I see is this: 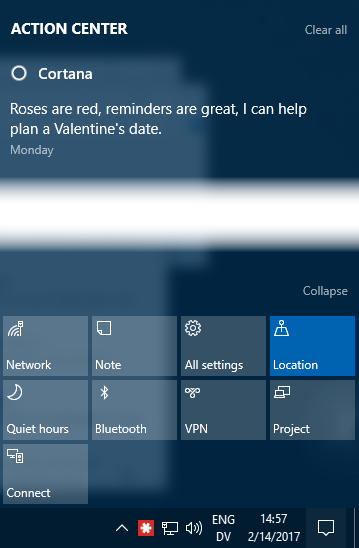 (Note: the blank area is just cut out to make the screenshot smaller, there is nothing between "Monday" and "Collapse"):

I have the following settings in "Notifications & Actions":

Are the seven repetitions of EzUpdt.exe possibly to blame? (From searching, this is apparently an updater from ASUS, my motherboard manufacturer; I haven't found anything about multiple copies being present, though.) I've tried turning all their notifications off, or all but one off, but still, faded notifications aren't appearing in the Action Center.

I have checked Event Viewer, even immediately after a toast fades away, but haven't found any sign of almost all of these. (Those that I can find, I find because I know what application created the toast and there's a logged message from the application about the event. But there appears to be no place I can look to just see the last thing that notified, and many of the things that notify do not seem to log at all.)

Most of the answered questions here are about clearing away excessive notifications in Action Center, or hiding them completely. I have the opposite problem, — disappearing notifications that I want — and I'd like to know how to fix it.

(Apologies if I've used incorrect nomenclature—I'm a Unix sysadmin, so Windows is very unfamiliar territory to me. I've tried to be a bit over-verbose to make it clear what's going on, even if I'm using the wrong words to describe it.)

I'm running as a user with administrator privileges.

I'm asking about why the notification "toasts" (again, I don't know the Windows terminology) are never making it into the Action Center in the first place.

The toast notifications are transient by definition, so they vanish after a bit of time, unless they require action.

"A toast notification is a transient message to the user that contains relevant, time-sensitive information and provides quick access to related content in an app."

You can control how long transient toast notifications stay visible via Settings -> Ease of Access -> Other options -> Show notifications for, where you can set them to last onscreen for up to 5 minutes. 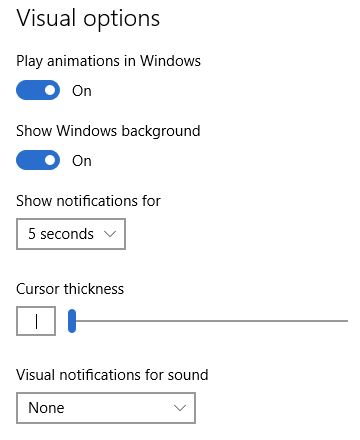 You can use Notification Logger app from Microsoft Store to view past notifications history.

Not the answer you're looking for? Browse other questions tagged windows-10 notifications action-center or ask your own question.

105
View past notifications in Windows 10?