Showing all glyphs in PowerShell

My version is 5.1 but the Lucida Console font is not able to show the full range of glyphs for most, if not all, Unicode characters. Isn't PowerShell making use of the installed fonts in the Windows host on which it is running?

An example is U+2227 = "∧" = logical and in mathematics. It displays in Lucida Console used in gVim on Windows 10, but not in a Powershell console using the exact same font.

Is there a switch to turn display of glyphs that are already in the installed fonts?

First you should know that PowerShell doesn't know anything about font rendering. It's a shell (like cmd or bash) and not a terminal. It simply passes the character stream to the terminal and must connect to a terminal to work, therefore you can do nothing in this case except changing to a better terminal. The default terminal in Windows is conhost.exe which is highly ancient and doesn't even support Unicode properly. If you notice you'll see that the interface and settings dialog are actually the same (with slightly different color palette) if you open cmd or powershell because both run on conhost if not called from another terminal. Some alternative terminals being the official Windows Terminal, putty, mobaxterm, ConEmu, cmder...

Then comes the issue of glyph substitution. Windows does font substitution, font linking or font fallback in most situations and many apps also customized that process further so that font rendering work smoothly. That makes you think that the character is available in Lucida Console but it's actually not. That glyph is just substituted with from another font. You can check the characters available in each font with Character Map. The nearest characters in Lucida Console are U+221F ∟ and U+2229 ∩

Unfortunately in a terminal with fixed-width font substitution is much more harder because the width of the character in another font is different. As a result

What limitations does the Windows console have regarding Unicode? 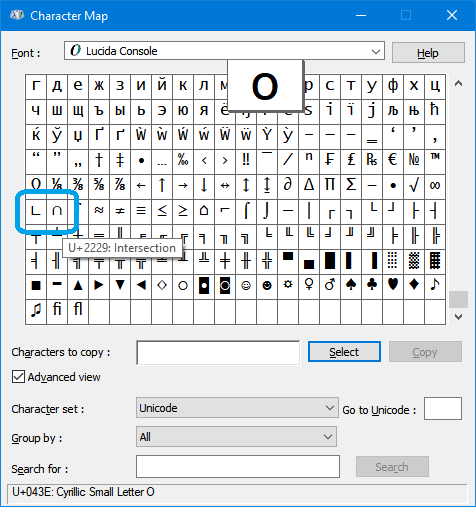 The real solution is to use a better terminal with good font substitution support. Try Windows Terminal and you'll soon realize how bad conhost is

This is a limitation of the way the window works and displays. The font Lucidia Console doesn't have all those unicode characters in it, so it doesn't display them. You can't substitute a different font in the middle of the window to show a specific glyph, as it's an all or nothing deal.

This can be solved by setting the window to use a different font.

Not the answer you're looking for? Browse other questions tagged powershell fonts unicode rendering powershell-5.0 or ask your own question.

6
Good Font for Unicode Symbols
5
How to get a Unicode-supporting font for Windows 7 command-line?
53
Cannot change powershell default font to Lucida Console
0
Czech language input method and font support in gvim 7.4 on Windows 7
21
Why does running PowerShell change my console font?
8
What Font does Notepad use to display e.g. Hebrew, when it claims to use Lucida Console but Lucida Console doesn't have those characters?