2.4GHz WiFi channel selection when all the non-overlapping channels are crowded

Note: I have no option for upgrading to 5GHz for now.

It is suggested to select form the least crowded of the 1-6-11 Source (Here)
If you go with anything else, you can seriously reduce overall bandwidth.

Does your Wireless Router not have that the option of auto channel select?

(Summary of the Link Provided)

Note In this model, the first two access points had to share the RF because they were on the same channel.

Table 1 displays the results of the two tests. Note that even when two access points shared channel 1, the overall performance was greater than in the four-channel scenario. This is because the CSMA protocol created a holdoff when the clients on the same channel decoded that the interference was another 802.11 signal. In the four-channel scenario, the client could not decode the interfering signal, reacted as if it was low-level noise rather than a holdoff, and sent the packet. This resulted in a collision and a retransmission on both clients.

Many have long recommended a three-channel approach to provide nonoverlapping channels. We still recommend such installations for 2.4-GHz WLANs, for both 802.11b and 802.11g technologies. A four-channel scheme can cause severe issues when the system is brought online and the number of users starts to increase.

In a four-channel design, the signal of one device is noise to another device. Even in a design where a channel 1 cell would never overlap a channel 4 cell, for example, you must still account for clients transmitting that are not in the same location as the access point. By looking at only the access points, you are ignoring the majority of radios in your network. Virtually all new radio deployments support 802.11g and/or 802.11a and thus OFDM, which has much more sideband energy than 802.11b.

If you design a system with four channels, the risk of interference between cells greatly increases, resulting in poor performance and lower throughput. As the volume of users and bandwidth needs increase, problems will slowly arise, making it necessary to resolve the issue at a later date. Start by using three nonoverlapping, noninterfering channels.

If you have 2.4 Ghz and no option to upgrade to 5 Ghz you are better off setting your channel to one that has the least overlapping. You can do this in your router interface.

Using an app called Wifi analyzer you can see which channels are currently overlaped.

You can get to your router by entering the default gateway address into your webbrowser. You can find this address by starting cmd and typing ipconfig and then enter. Here is a router interface with the channel option. You need to change this to a channel that has the least overlapping. 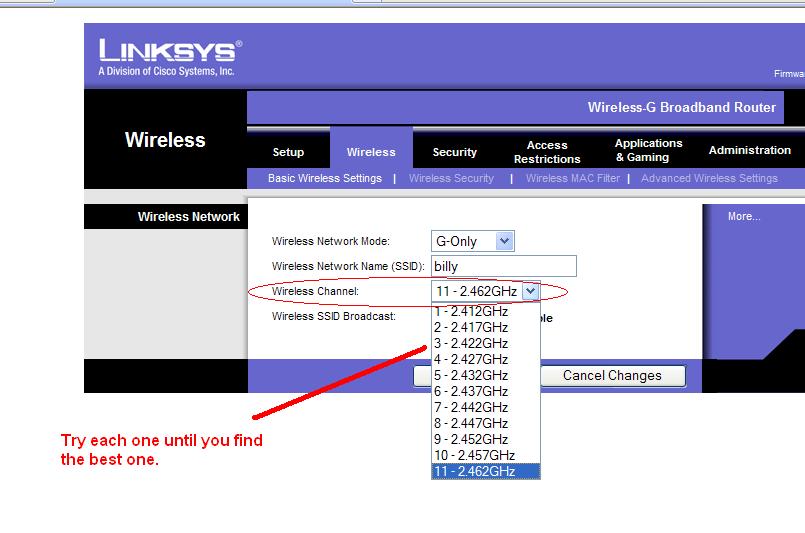 Setting the option to Auto will do a pretty good job. It will automatically switch to different channels and can sometimes get into a crowded channel. I find it better for myself to be able to check channels and change it every now and then If I experience wifi issues.

p.s if you have external wifi adapters some of them may not be able to reach you at a different channel. e.x my adapter didnt see my network when it was on channel 11 or higher. Its just something to keep in mind.

Not the answer you're looking for? Browse other questions tagged wireless-networking wifi-configuration or ask your own question.

15
Whats the significance (if any) of wifi channels 12-14?
114
Is it better to use a crowded 2.4GHz Wi-Fi channel 1, 6, 11 or “unused” 3, 4, 8, or 9?
3
Is better a low power WiFi signal without interference or a more powerful signal with interference?
9
It's almost impossible to avoid the overcrowded wifi channels
0
Which will take precedence when I have 2 wifi connections?
1
Which WiFi channels should I use for a two-router, 4-network setup?
0
Which wifi channel should I pick?