Alright, so I play a game called ArmA 3 a lot. I usually play on Roleplaying servers, and they use a plugin called Task Force Radio.
Task Force Radio (From now on abbreviated to TFR) is a plugin that uses Teamspeak 3 and it's 3D sound environment features to work.
Basically, if someone in-game is too far away from me to hear, the in-game mod will tell the TFR plugin that, and it will mute them, if they are far away but within earshot, TFR will turn down the volume for them accordingly. If they are to my left, TFR will make them sound like they 're to the left. If you're still confused about that check out this video.
TL;DR I use Teamspeak3 to communicate with people in-game.

I also have a plugin for Teamspeak3 called soundboard. Take a guess as to what it is.
Ding. It's a soundboard. It lets me play songs and sounds through my microphone on Teamspeak, and when used with Task Force Radio, it allows me to do some cool stuff.

I have a Logitech G910 for a keyboard, and on the side of it is 9 macro keys. I have these keys set to emulate F13-F21 function keys.

So, what's the problem?

I mentioned I have function keys F13-F21, well the reason I have those is because in TeamSpeak I want to bind those keys to soundboard keys.
So say for example someone makes a terrible joke, and no one laughs. I want to be able to seize the opportunity to quickly hit F13 and play a 90's laugh track, so he can feel ever worse about himself.

Well, then why don't you just bind Laugh Track for F13, you big dummy?

For some reason, TeamSpeak3 doesn't properly register F13 when assigning it to a hotkey. Instead, it just replaces it with 124, the virtual key for F13.

Well, I went hunting through the TS3 directory. And found the text data in the settings.db that directly relates to the hotkeys. 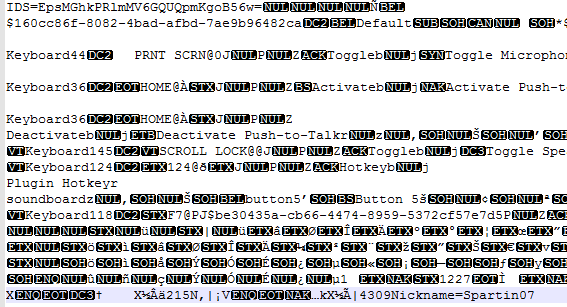 Now I'm stuck. I've tried replacing the Keyboard124 and the 124 string after it with KeyboardF13 and F13, but that just causes teamspeak to create a new settings file.

So my question, how would I modify this data to allow me to use F13 as a hotkey in TS3?

Browse other questions tagged teamspeak or ask your own question.

12
How do I find out my teamspeak admin key?