Multiple line Find & replace - Notepad++ , regex, copy a text from a particular line and replace in another line

The solution I seek involves using regex in Notepad++ with either the built in Find & Replace or with the multiline search and replace dialog made available by the NPPtoolbucket plugin.

This is an example extract of the input file:

The desired outcome should be:

The issue I'm facing is I have 47 IFC files with (12000+ lines each). These files have an assembly name in the first line (unique to each IFC file) and it needs to be used to replace content somewhere in lines 48, 87 and many more lines in all of the 47 IFC files. It all follows a particular pattern. Can you suggest any trick to achieve this using regex?

(NEW_SYNTAX_I'M_SEEKING) will become back ref \4; this will be the new regex syntax I'm looking for, which will fetch content spread across multiple lines and the one I dont want any change

Hope I got my question & intention articulated properly. I'll highly appreciate any help given.

If you work with text files a lot you will love awk.

The explanation is going to take a while, let me first break down the command into three sections, each made up of a condition and a command:

awk this is a tool for manipulating text files, alternatively I would recommend perl.

-i inplace this means the original files are going to be edited (make backups!). Disclaimer: I couldn't test this setting yet because it requires a more recent awk version than the one I have installed.

' the command is a string, therefore it is encapsuled in apostrophes.

match( this is another condition that must be met: a regexp match function that takes 3 arguments.

matches third argument, the variable where the matching strings are to be stored.

{ here start the actions that are to be carried out in case the conditions are true.

name = matches[1] the variable name is created and it is assigned to be equal to the first capture group (same as backreference \1).

print $0 we print the first line, too.

/IGNORE/ look for lines that contain the text IGNORE.

NR>1 && !/IGNORE/ condition: for all lines except the first one, if they don't contain the text IGNORE.

{print print the result of the replace. gensub ( function that performs search and replace allowing the use of backreferences.

"1" means that only the first match is to be replaced.

' end of the awk command.

*.txt run awk on all files with extension .txt in the current directory.

Note: I know that you are asking how to do this in Notepad++, but I believe you should consider command line tools. The reason is that graphical programs are more apt to perform a one-time operation, but in the comment you specify you would like to automate the work and process 47 files at once. Command line is more apt to automation than graphical interfaces, that's my point.

To get started, you have gawk (GNU awk) for Windows and if you want to proceed further you can work on Linux or install a Linux-like environment like Cygwin.

make sure you check the: [ ] . matches newline option

All these capture groups are useless and slow down the process, you just need only one. 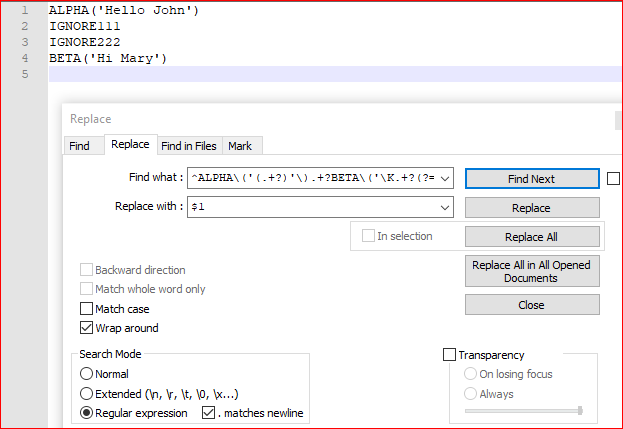 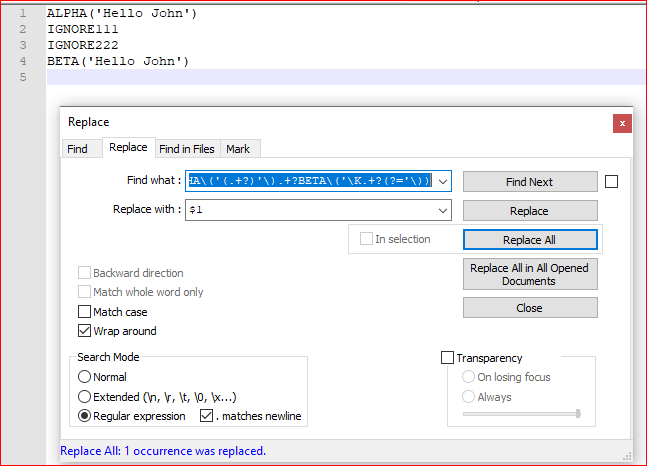 A bit of tweaking with information gathered from forums helped me.

The solution is pretty simple ( The trick is in step 2)

Not the answer you're looking for? Browse other questions tagged notepad++ regex or ask your own question.