What's up with HDMI and DisplayPort over USB C?

What is DisplayPort™ over USB-C™? says:

Advantages of DisplayPort™ over USB Type-C

Supports HDMI 2.0a on select products and is backwards compatible with previous versions.

I am very confused. Just when I thought I understood how USB C works ( four high-speed lanes can be configured to carry whatever) this makes no sense. I presumed the DisplayPort alternative mode means those high speed lanes carry DisplayPort signals and then, as the page says, you could use adapters to take this DP signal and pass it to a VGA, DPI etc display.

But what's with HDMI especially 2.0a? I thought DP to HDMI 2.0a converters were rare as hen teeth still and also it does not say "HDMI 2.0, VGA, DVI with compatible adapters". So... what's going on?

Note this document predates the HDMI alternate mode and clearly is not about that.

The Wikipedia article on USB-C has a "Alternate Mode protocol support matrix for USB 3.1 Type-C cables, adapter cables and adapters" which indeed shows HDMI 2.0b support for every Alternate mode except HDMI Alt mode. However, this table is split into Passive and Active rows and HDMI appears under Active for DisplayPort, Thunderbolt and even in MHL mode, HDMI 2.0b appears to need an active adapter. MHL and HDMI modes support 1.4 with a passive cable apparently.

This, however, is not properly sourced. The only source linked is the VESA press release about VESA® Brings DisplayPort™ to New USB Type-C Connector which has this sentence "The DisplayPort Alt Mode can also drive adaptors that support the huge installed base of existing DisplayPort, HDMI, DVI, and VGA displays." But it leads to this FAQ also from vesa.org which says

Q: Can I connect my HDTV to a device that uses DisplayPort over USB-C for video output?

A: Yes. Adapters and Adapter cables are used to connect DisplayPort over USB-C to an HDMI input on the HDTV. HDMI 2.0 is supported to enable 4K resolution. If the HDTV has a DisplayPort input, then a USB-C to DisplayPort adapter cable can be used to provide DisplayPort display capability.

This FAQ has quite a number of nuggets. Here's one:

Inexpensive DisplayPort adapters are readily available for VGA, DVI, and HDMI displays. Adapters for HDMI 2.0 will become available in the near future.

Here's another where it compares to HDMI alt mode:

Hidden in the vesa.org FAQ, then, we found a way to figure out whether an HDMI adapter requires HDMI alt mode or DP alt mode: if it supports ARC/HEC/CEC then it's HDML alt mode, if not then DP alt mode. 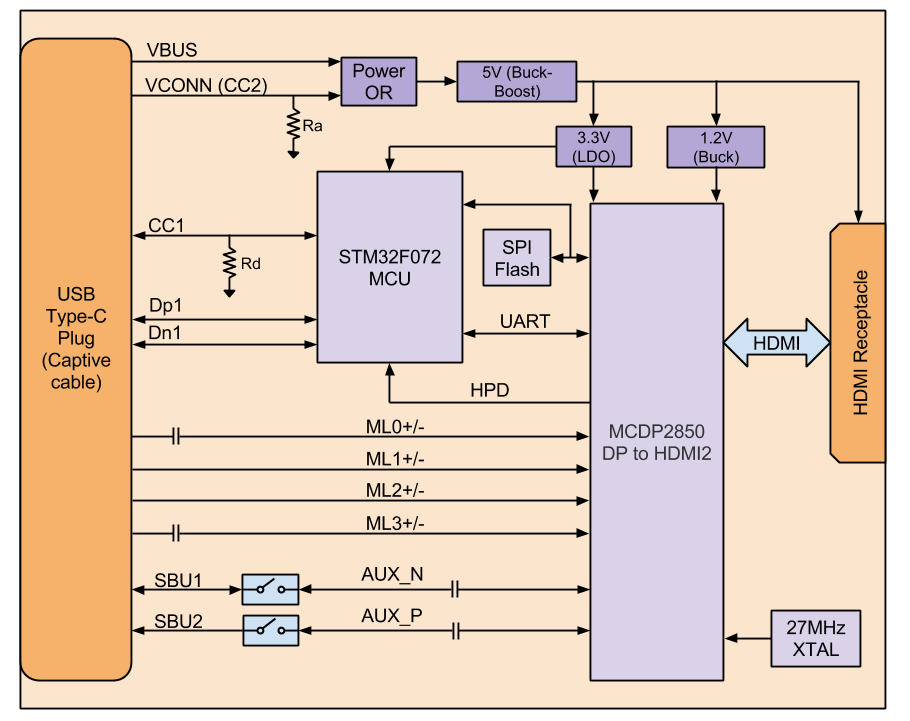 Here's the other side, an IC which takes USB 3.1 and HDMI 2.0 inputs and produces an USB 3.1 socket with DisplayPort alternate mode but to do so it converts the HDMI signal first.

All this proves there's no HDMI signal hidden in the DP over USB-C Alt Mode and the document in question seems to be a mistake or just simply misleading marketing suggesting you don't need an adapter for HDMI when using DisplayPort Alt mode when you most certainly need to. Since this blurb made it to other sites (like dell.com), it's rather unfortunate.

Not the answer you're looking for? Browse other questions tagged hdmi displayport usb-c or ask your own question.

2
Can I use my USB Type-C which supports DisplayPort in alternate mode to connect to a HDMI 2.0 supported 4K TV