Problems with Bluescreen on Windows 7. Cause unknown. Maybe SynTP.sys or acpi.sys

Hi normally i have more programming type of questions but today i have a good one and o'boy i am so lost. I am trying to tell only the important.

I am working in a big corp. and here all applications are distributed over network. I am in charge of the installation and distribtion of applications and Operating Systems(Windows 7 32x) which is of course done via an Server-Clientsystem and scripts. Everything is automative and can easily be deployed. In a new installation of an OS the driver are automatically installed.

Since some weeks we have the problem on the clients that after a not definitive timespane or trigger a bluescreen appears when the client is booting itself. I am deploying Images on the clients which are the laptop models CF-53 and L420. I am creating the images in a VM upfront and install necessary software or windows updates on them. Through this i can be sure there is no malware on them. The Bluescreen tells the root of all anger: IRQL_NO_LESS_OR_EQUAL, some drivers coudn't be loaded. I tried to solve the problem with the windows build repairsystem which did help mir first handed but not everytime. through this is could get my hands on some logs.

What have i done a.k.a investigation: I started my search by sorting out software problems. It would not be the first time some proprietary driver from siemens inflicts some bluescreen. I installed a fresh image on a Laptop model L420 and used a script which automatically logs into the client and reboots them. I let the script run again automatically after a period of time. The result were that applications are not the trigger. The bluescreen came again. After this i started lookin into the logs. The first log was the windows eventmanager which revealed a problem with the installed anti-virus software. Normally it is installed on the image for better protection. I created a new image without it and run the test again while reading other logs. The test failed and the anti-virus software was also not responsible. I read the windows minidump and NTBTlogs which stated that SynTP.sys and acpi.sys could be responsible. SynTP.sys is a driver from Touchpad UltraNav.

I downloaded the lastest version of the driver and improrted it in the serversystem. After another two test queues i could confirm that neither the driver nor an windows update are responsible for it. In the one test queue i installed the driver and updated the operation system till it told me it had no further updates for it. In the other test queue i also manuelly installed the latest driver for the touchpad but did not update windows. The results were the same(Bluescreen with the same Error)

to conclude: I did some research and got the following The Bluescreen happens neverless: 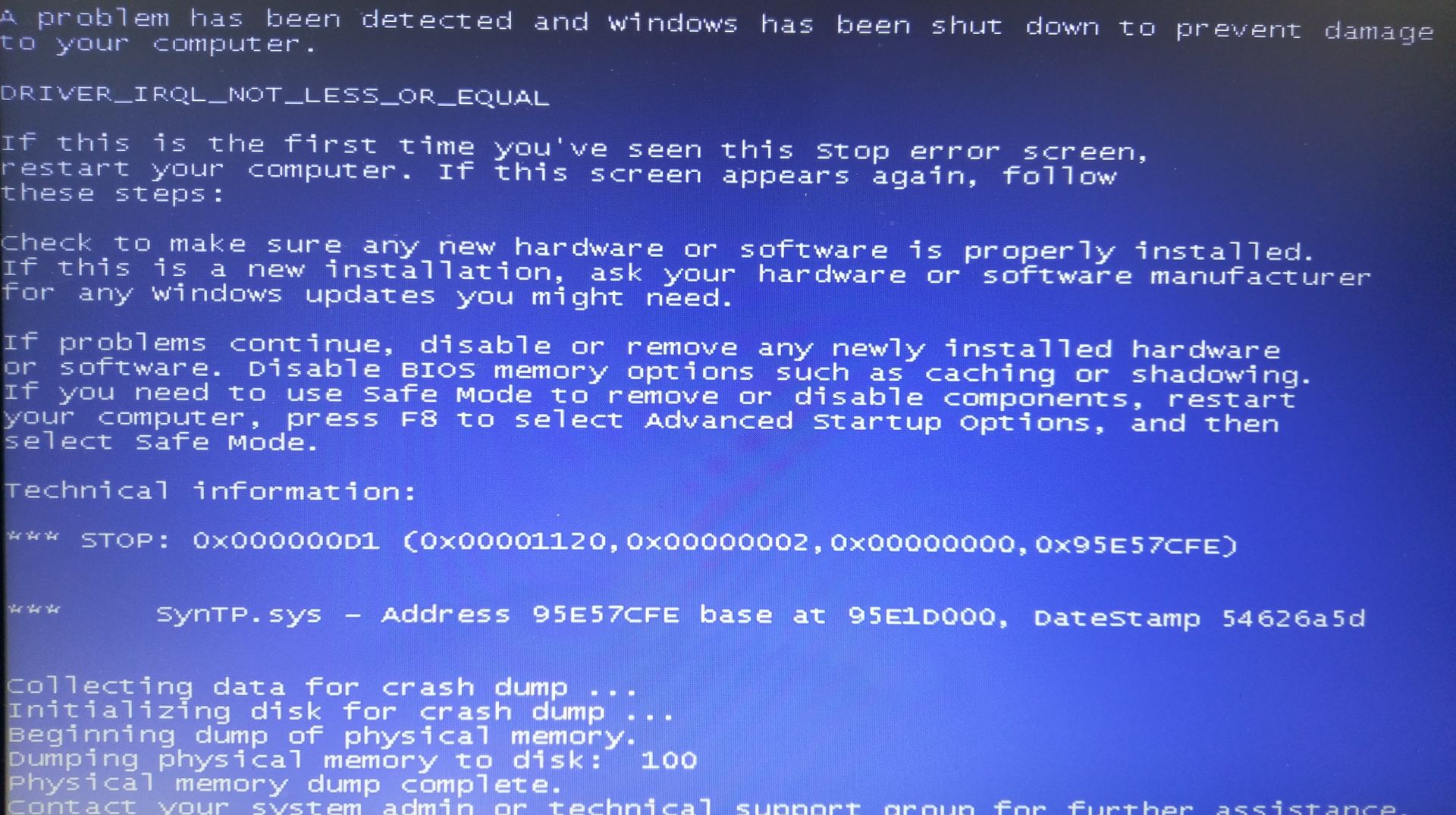 Second is a Panasonic CF-53 MK3 which was installed through the server system baramundi. The server system uses a cloned image from a vm for the client. I installed the latest driver from synapsis for win7 (thx to magicandre1981 for the link). I also installed the anti-virus client. I wanted to test if i can get a bluescreen on a cloned system with non-generic drivers and the antivirus. In other testruns this was enough to generate the bluescreen. So far no bluescreen.

The dump shows that the SynTP.sys (Synaptics Touchpad Driver) as cause:

Because the driver is from 2014, try to install the latest version.

Indeed it seems most BSOD error are caused by corrupted system files you have mentioned especially acpi.sys and I have been a victim of such an attack.

Sometimes its better to cleanup the Windows Component Store altogether and retrieve new fresh files from Microsoft servers and in most cases reolves the problem.

Not the answer you're looking for? Browse other questions tagged windows-7 boot drivers bsod touchpad or ask your own question.