I have a table, that keeps track of players scores for a board game. The relevant columns in the source table are Player Name, which is just text, Game Number, which is unique for each game played, and 'Won?', which is 1 if the player won that game, and 0 otherwise. TThere are other columns, but they are just used for grouping.

I want to add a 'Win Rate' column, which would basically be 'Win Count'/'Games Played' or 'Win Count'.

I tried to add a calculated field 'Win Rate' as "=COUNT(Won?)/COUNT('Game No.')", but this made everything 1, regardless of the actual value.

The percentage of True items in a list is the average of zeros and ones, where True is represented by 1 and False by 0.

Just drag the Won field into the values area, and change the aggregation from Sum to Average: 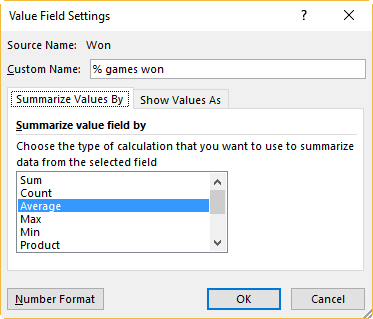 Got this from my good pal Doug Glancy's blog at http://yoursumbuddy.com/percent-of-true-items-in-a-pivot-table-field/

0
Excel 2007 pivot table does not aggregate properly
2
Excel 2010 Pivot table to calculate average profit/ loss
1
'Count Distinct' and Min(date) in the same pivot table?
0
Pivot Table with absolute values and percentages in columns with values in rows
6
Working with Averages in Pivot Table (Calculated Field)
0
Filtering By Values in Excel Pivot Table
0
Excel: non-nested data column in Pivot Tables
0
Calculated field based on sum and count of other field