what can I do if an application doesn't recognize horizontal scrolling?

Is this something that the programmer of the application has to add support for? Or are there possibly some hacks that could let me build my own support? I am running Windows 7, incidentally.

I am also using the MX Master and ran into this issue.

Open up your Logitech Options software and from the "Mouse" panel, click the white circle over the Thumb Wheel Scroll. This will bring up behavior options. Inexplicably, changing the behavior to "Zoom In/Out" seems to fix this horizontal scrolling issue (at least, I can confirm this for SSMS.)

Try this out for other applications -- if your horizontal scrolling breaks, elsewhere, try using the Application Specific settings to only change the behavior in your desired application.

Remapping the key-strokes separately solved the problem. Settings go as the following: 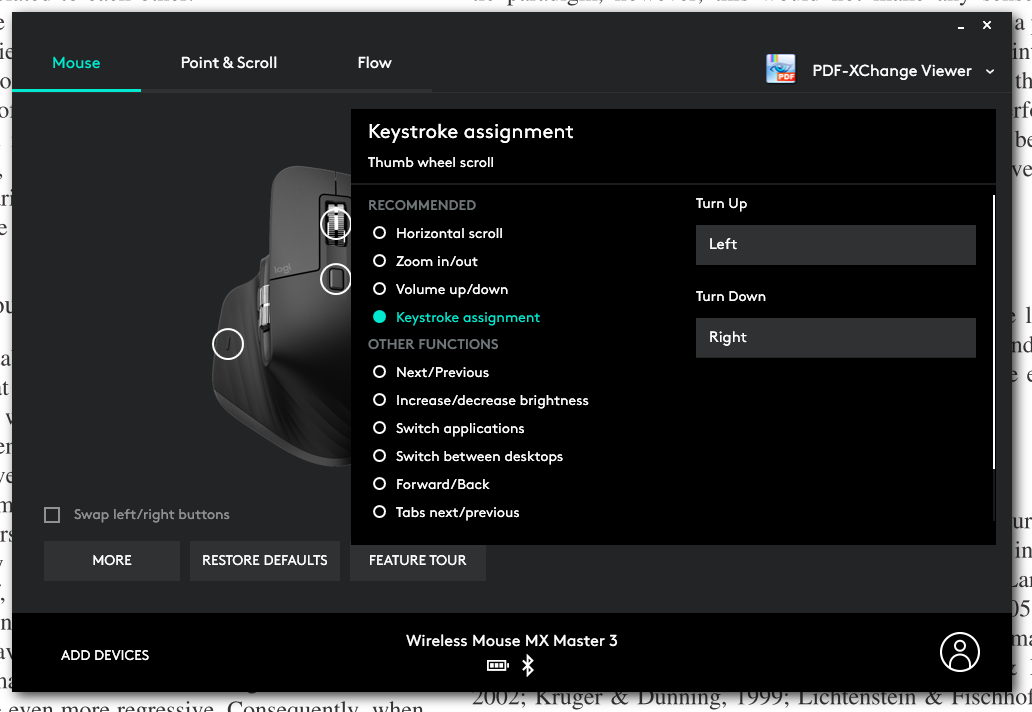 In my case, it was an old version of Options that was installed automatically. After manual update to the latest Options build horizontal scrolling was fixed.

But this only worked for Edge and some other apps. There are still some apps that do not respond properly to horizontal scrolling. That is very sad for a device like Master MX 2S.

Not the answer you're looking for? Browse other questions tagged mouse logitech-mouse ssms or ask your own question.

13
Logitech mouse driver alternative for Mac OS X
29
Back / Forward mouse buttons do not work in VMWare Workstation 6.5 Guest OS
1
Horizontal scrolling not working in Chrome with Sharkoon Draconia mouse
1
How can I get my mouse's tilt wheel to stop sending simulated keypresses?
0
SQL Server Management Studio (SSMS) 2012 slow to show results in Grid only
0
Logitech MX Master Buttons don't work
3
scroll wheel not working when mouse is moving
0
Modifier key to change the action of the side scroll wheel on Logitech MX Master 3 mouse